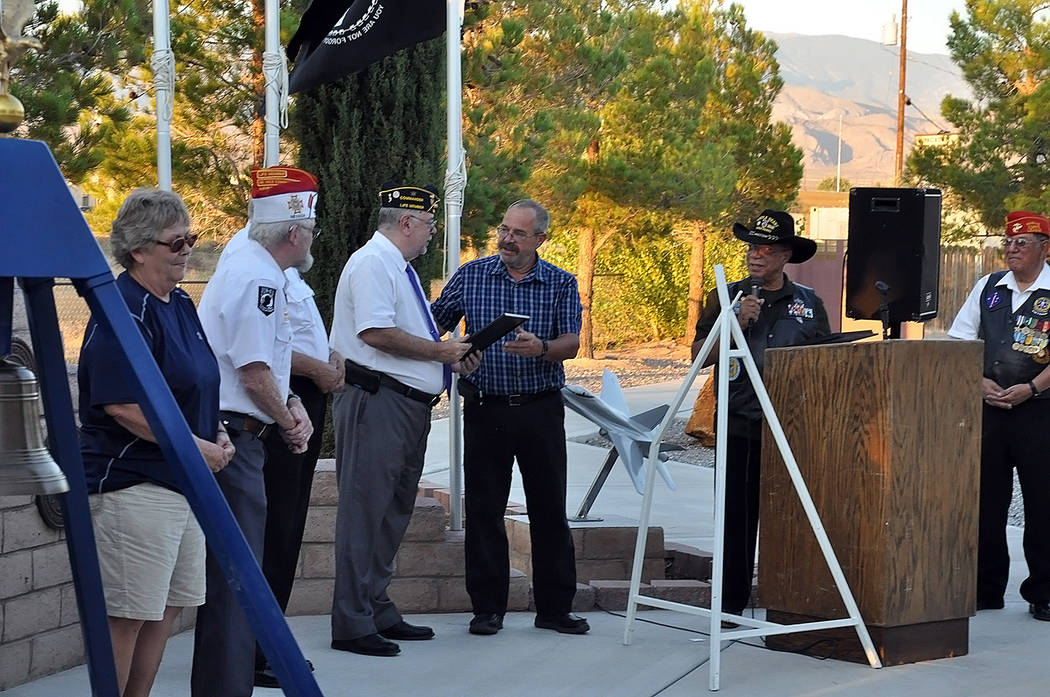 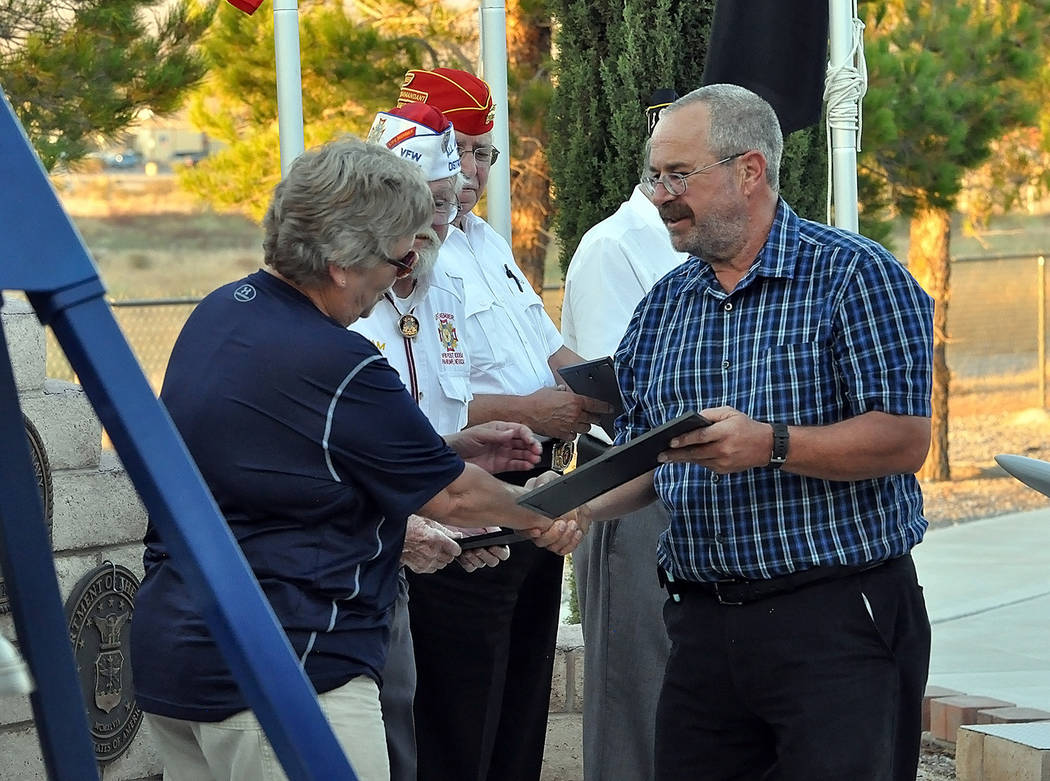 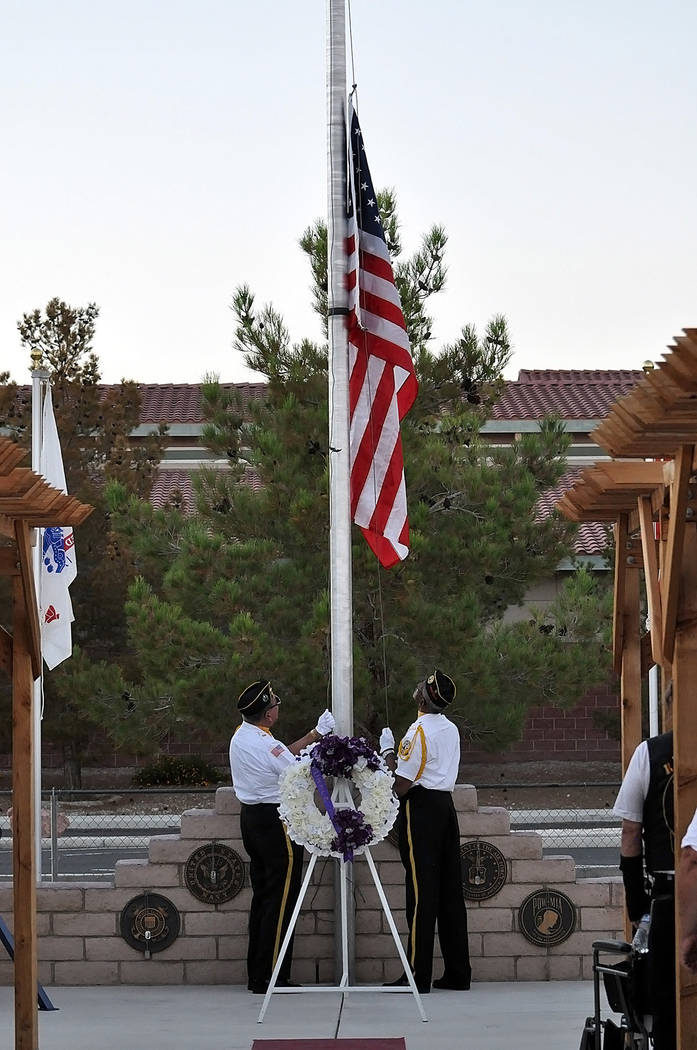 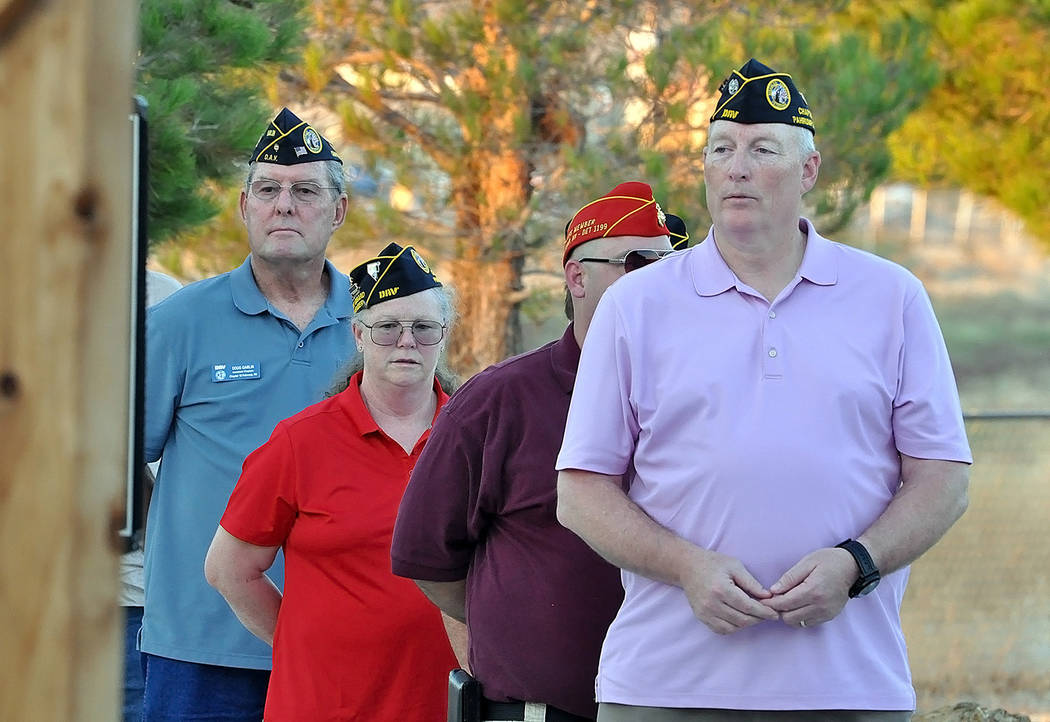 After issuing an official proclamation on Aug. 1, several dozen residents, including all five Nye County commissioners came together for the first ever Purple Heart Day observance in Nye County on Monday, Aug. 7.

The event, hosted by the Disabled American Veterans Chapter 15, took place at the veterans’ section of Chief Tecopa Cemetery at 7 p.m.

The Purple Heart, according to retired Air Force Lt. Col. Dr. Tom Waters, is an American military decoration, awarded in the name of the president, to those wounded or killed while serving in the military on or after April 5, 1917.

“I thought the ceremony was very well attended,” Waters said. “It was something that local veteran Cles Saunders came up with for the Purple Heart recipients here in Pahrump, so he started putting it all together.”

“We did not know what to expect since it was the first one, but we are grateful for the attendance and the weather,” said Waters. “I thought it was great that our assemblyman, James Oscarson, was there as well as the commissioners who did the proclamations for us. To declare that August 7, as Purple Heart Day in Nye County. It was just fantastic.”

Waters also said Purple Heart Day has been observed nationally for many years.

“President George Washington, back in 1782, created the Purple Heart,” Waters said. “It has been observed every year on August 7th. The Purple Heart is the oldest military award still given to U.S. military members. The original Purple Heart, designated as the Badge of Military Merit, was established by President Washington.”

“They gave us a proclamation and they also gave Tonopah a proclamation,” Waters said. “I was trying to figure out where we should put our proclamation here in Pahrump. Somebody said why don’t we give it to the VFW post, which was one of my recommendations because they have many Purple Heart recipients at the VFW.

“Since we are members of several factions here in town, we figured why not give one to the DAV, the VFW, the Marine Corps League.” Waters said. “The fact that it was the first one ever, to have a Purple Heart ceremony in the town of Pahrump, I thought it was truly outstanding.”

Waters also said a proclamation will be on display at Chief Tecopa Cemetery.

“Commissioner Donna Cox suggested to have one at the veterans’ section of Chief Tecopa Cemetery inside the building so when people come over and visit, they can see the proclamation displayed. Commissioner Dan Schinhofen said no problem, I’ll bring some more. The commissioners had three more created and there were four that we handed out at the ceremony.”

As a veteran and Purple Heart recipient himself, Waters spoke of his experience during the Vietnam War, decades ago.

He noted that his brother was killed in action during the conflict.

“I am a Purple Heart recipient as was my brother who was killed,” he said. “Because my brother was killed, I did not have to go to Vietnam, but I decided to go. I was told over and over that I didn’t have to go, but I had many friends who went to Vietnam. Everybody else was going so I decided to volunteer and ended up going. I’m glad I went to Vietnam, but at the same time, it was one of those things that once I got there, I was thinking that was the dumbest thing that I have ever done. Going to war is not fun at all.”

Waters also recalled the events that led up to earning his Purple Heart distinction, as he was just five days away from departing the conflict.

“I was called what’s known as a ‘short-timer’,” he said. “We underwent a rocket attack where the enemy was blowing up our airplanes. I was on an airplane and I got blown off the airplane. As a result, I cracked my spine and broke my foot. I was pretty cut up from falling on the concrete ramp. That’s how I learned my Purple Heart with five days to go. When you go to Vietnam, you try to be careful but a lot of things can happen. There were too many men who were short-timers that were killed.”

Schinhofen, meanwhile, provided his thoughts on presenting the proclamations this week.

“It was my privilege, on behalf of the Nye County Commission to present these proclamations,” Schinhofen said. “While the board may not agree on some issues, I cannot remember a vote on veteran issues that was not unanimous. We are proud of our veterans. It was a nice event and I was happy to participate.”