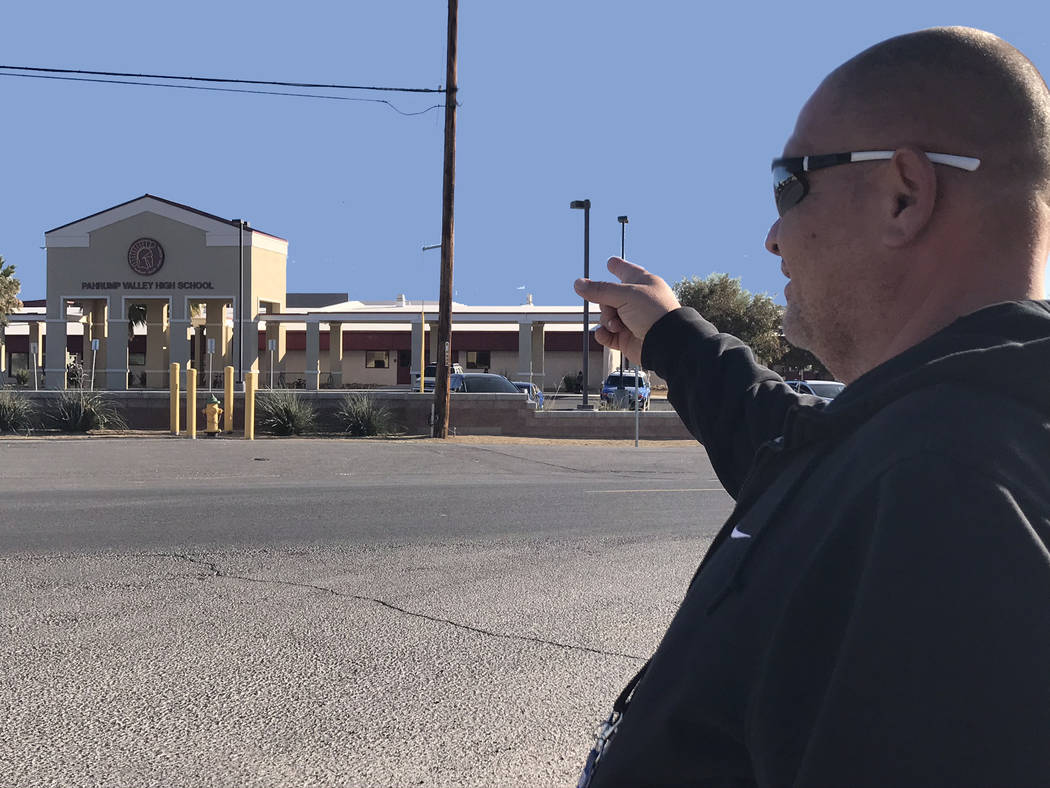 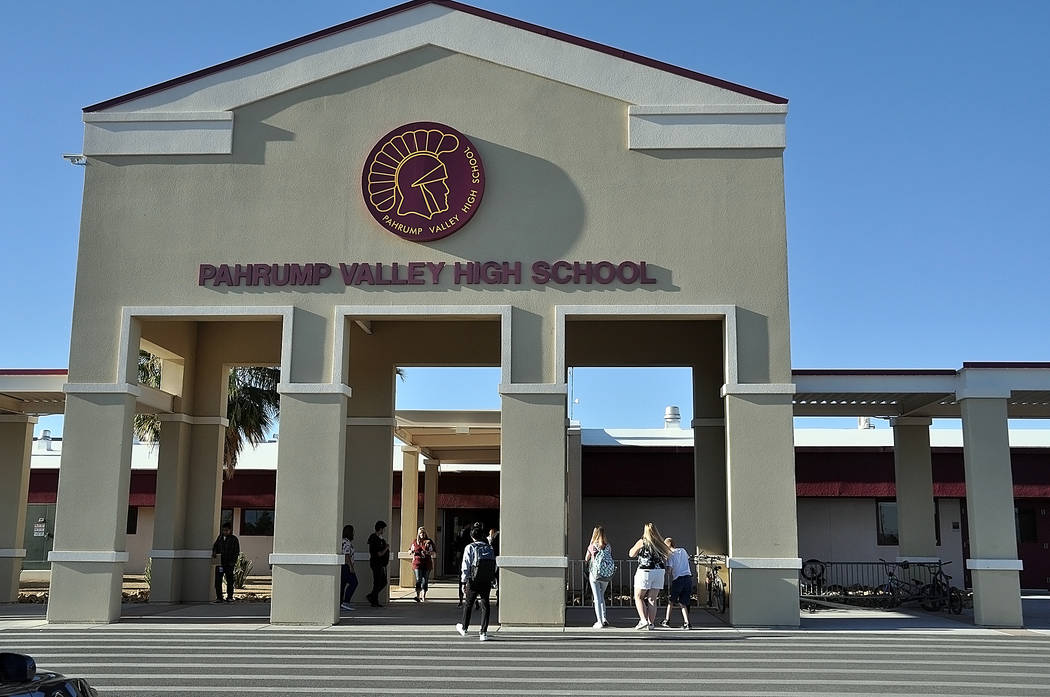 Horace Langford Jr./Pahrump Valley Times The campus monitor returned to work at Pahrump Valley High School in mid-September after being fired from the school in December 2018. 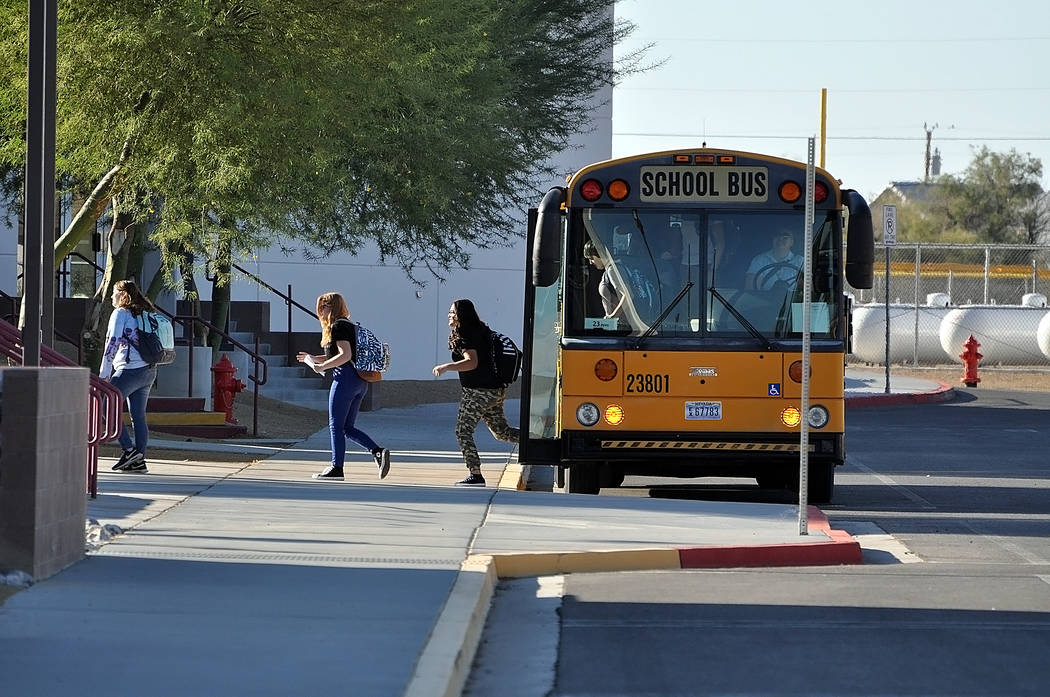 Horace Langford Jr./Pahrump Valley Times Students getting dropped off at Pahrump Valley High School on Monday, Aug. 12, the first day of instruction for the 2019-2020 school year. 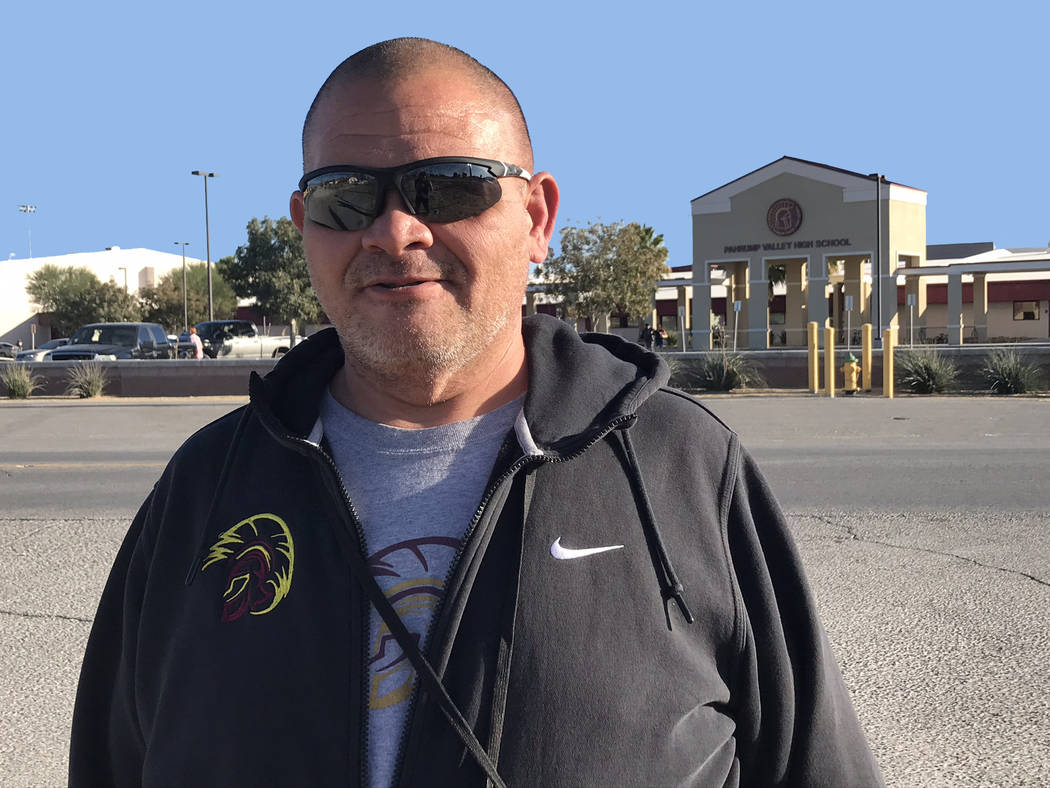 Jeffrey Meehan/Pahrump Valley Times Delwin Souza stands across the street from Pahrump Valley High School. Souza returned to work in mid-September after being fired in December 2018 by the Nye County School District for smoking with a student. 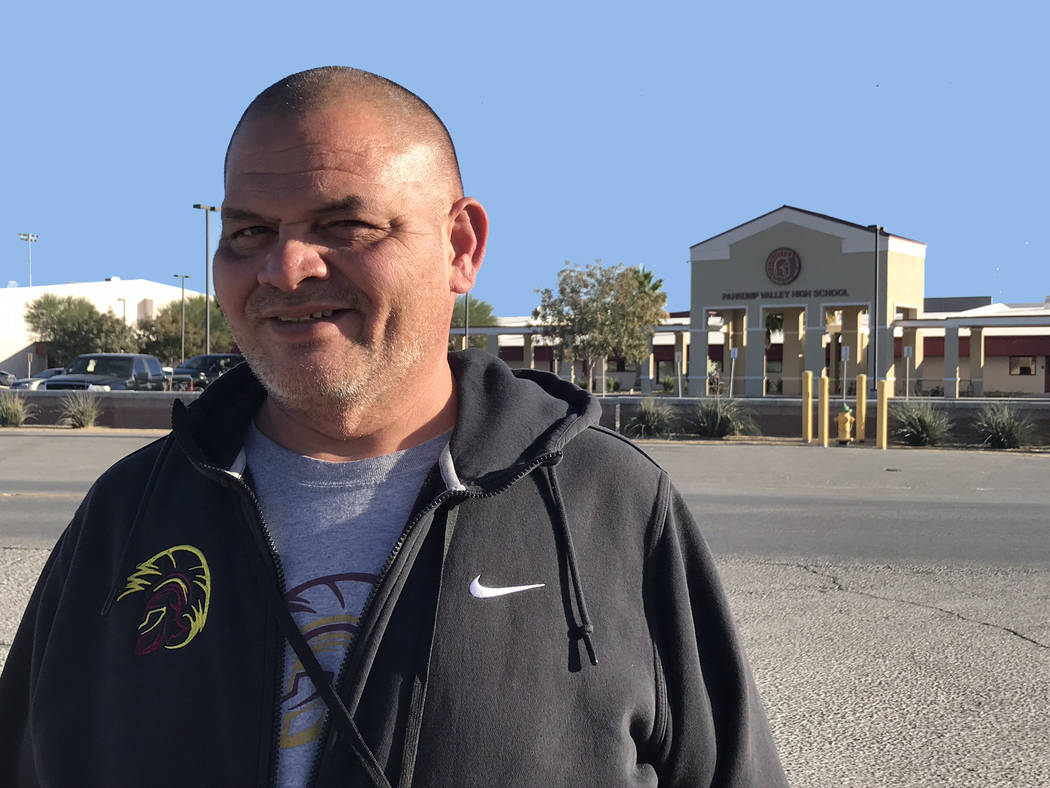 Jeffrey Meehan/Pahrump Valley Times Delwin Souza, stands across the street from Pahrump Valley High School. Souza returned to work in mid-September after being fired in December 2018 by the Nye County School District for smoking with a student

A support staff member at Pahrump Valley High School, fired after the employee and a 16-year-old student were allegedly caught smoking cigarettes in the vicinity of the high school’s baseball field at the end of 2018, returned to work this fall following an arbitration process.

Delwin Souza, a campus monitor at Pahrump’s high school, returned to work in September following an arbitration process between the school district and the Nye County Support Staff Organization, according to a 27-page “Arbitrator’s Opinion and Award” document obtained by the Pahrump Valley Times.

Souza, who was terminated from his position in December 2018, said he returned to work in the second half of September.

Souza started in his position in 2015. According to arbitration documents, Souza had no performance evaluations or documentation that he’d been disciplined in the past during his time with the school district.

Souza returned following a decision by Michael Leb, an impartial arbitrator, according to documents. Overall, Leb found that the penalty imposed by the school district in the case was “excessive” following a hearing at the end of June.

Leb came to this decision based on three reasons: The school district “abused its discretion by pre-determining the outcome of its investigation” into the incident; the termination was disproportionate to the offense; and the district’s use of a policy prohibiting personnel from having sex with students as a basis to terminate Souza. According to the opinion, “The district abused its discretion by basing the termination on a policy prohibiting school personnel from having sex with a student (policy 6143).”

In the opinion and award document, Leb found that the district didn’t have just cause to terminate Souza. The termination was converted to a written reprimand with an 11-day suspension, which will remain in Souza’s employee file for three years from the end of December 2018.

Souza was also awarded back pay and benefits, except for the 11-day suspension period; that is, unless the district could show that Souza’s position was not funded at any time during the period, according to the arbitration decision. He was also reinstated to his position.

The event under question occurred on Nov. 30, 2018, according to the arbitration report.

A student stormed out of Pahrump Valley High School Assistant Principal Kenneth Weaver’s office on the day of the incident, and Souza was told to go after this student.

Souza followed the student “outside and into” the high school baseball field’s dugout where Souza told this student to put his cigarette out, but the student refused.

According to the arbitration document, Souza stepped out of the dugout to check a message on his phone. The message was bad news from Souza’s cousin about his mother, who was hospitalized with cancer at the time.

The document states that Souza lit a cigarette up outside the dugout following reading this message.

“Shortly thereafter, physical education teacher Jordan Hardsocg came upon the dugout,” the document stated. “Hardsocg later reported to Weaver that she had observed grievant (Souza) and” the student “smoking in the dugout.”

“Schmidt also indicated that she filed a report about the incident with the Department of Children and Family Services and with the Nye County Sheriff’s Office,” according to the arbitration document.

The support staff organization filed a grievance on Souza’s behalf in December 2018.

The staff organization moved through the grievance process. The school district’s board of trustees voted 5-1 to approve Souza’s termination at the end of January, according to the document.

The school district later agreed to enter into the arbitration process in February.

The Nye County School District was contacted for this report but couldn’t comment on personnel matters.

Leb found that there was “no question” that Souza violated district policy, information in the opinion and awards “Opinion section” (under merits).

“He admitted it during his testimony and acknowledged that he did so in his post-hearing brief,” the arbitrator’s opinion document stated.

Overall, however, Leb found that the “penalty imposed” was excessive in Souza’s case.

According to the award and opinion document, Schmidt was clear on the reason for Souza’s firing: Souza “‘violated the adult-student boundary’ by smoking with a student.”

“There is no question that Souza’s conduct was highly inappropriate,” the opinion and award document stated. “On the other hand, district blew this incident out of all reasonable proportion by reporting Souza to the authorities for child abuse and citing District Policy 6143 and corresponding regulation 6143aR as policies Souza allegedly violated.”

Nye County Sheriff’s Capt. David Boruchowitz said the sheriff’s office did investigate the incident. No other details were given.

Policy 6143 doesn’t apply to the case, according to the opinion document.

“On its face, this policy (6143) prohibits sexual relations between school staff and students,” the opinion stated.

The school district also used an administrative regulation (6143R and 6143aR) as reasoning to terminate Souza in 2018.

The opinion stated that the school district’s “attempt to equate Souza’s conduct with that of a teacher having sex with a student is an unwarranted and unreasonable overreach. Basing Souza’s termination on the policy prohibiting school personnel from having sex is an abuse of discretion by the district.”

Leb also found the district’s use of policy 7600 (Student and Safety Welfare) to terminate Souza was “inapplicable” to the case.

“The Nye County School District will take reasonable precautions to prevent accidents to students, employees and the general public while on school property,” policy 7600 states, according to the arbitration opinion.

In a Dec. 6, 2018 notice to Souza, a “formal notification” of employment termination, district policy 7600 and regulation 7600R were referenced as reasons for Souza’s termination.

“Again, the cited administrative regulation (7600R) applies to this specific policy; it cannot be construed as general policy statement that ‘school officials and teachers act in loco parentis to the students during the time students are under their supervision,” the opinion and award document stated.

According to the website of the Legal Information Institute, an independently-funded project of the Cornell Law School, in loco parentis is “A Latin term meaning “in [the] place of a parent” or “instead of a parent” and refers to the legal responsibility of some person or organization to perform some of the functions or responsibilities of a parent.”

A footnote in the opinion and award document addresses Souza’s comments on his understanding of “in loco parentis” during the arbitration process.

“Souza’s (presumably) tongue-in-cheek comment about not knowing what ‘in loco parentis” means is unavailing. So is the pettifoggery about whether Souza is a ‘school official’ as opposed to ‘support staff.’ The arbitrator can and does take notice that school personnel have a duty to model appropriate conduct at school including compliance with all school policies. The arbitrator also takes notice that school personnel have a relationship with students that imposes certain duties and obligations on those personnel. No written policy is required for these propositions. None of this, however, makes policy 7600 relevant to our case.”

Leb commented on the school district pre-determining the outcome of its investigation into Souza in the opinion and award document.

The district argued that “it conducted a full and fair investigation” prior to Souza’s termination, according to the opinion and award document.

Arbitration documents show that Schmidt used the words “automatic termination” as part of her response email to Weaver’s Dec. 3 email telling her about the incident.

“No amount of bobbing and weaving on the witness stand can explain away the clear import of this message,” the opinion and award document states. “Simply put, Schmidt made up her mind immediately upon hearing what Souza had done. Her investigation was simply a post hoc rationalization for her decision.”

The arbitration document further states that even if Schmidt had not made such a communication about terminating Souza, “her investigation would have been inadequate.”

Leb found no evidence that Schmidt tried to interview the student, which was an important point to the arbitrator, according to the opinion section of the award document.

“This is an important omission because the district appears to have based its discipline, at least in part, on its conclusion that Souza encouraged the student to go to the dugout so he could smoke,” the opinion section of the award document stated.

“The record does not support Schmidt’s conclusion that the student told Souza he wanted to smoke, so Souza led him to the dugout,” the opinion stated.

The document continued: “To the contrary, the arbitrator credits Souza’s version that Souza had no idea the student was going to smoke until he pulled out his cigarette and lit up. Had Schmidt interviewed the student, perhaps the record would be clearer on this point.”

The last finding was that the penalty imposed was disproportionate to the offense.