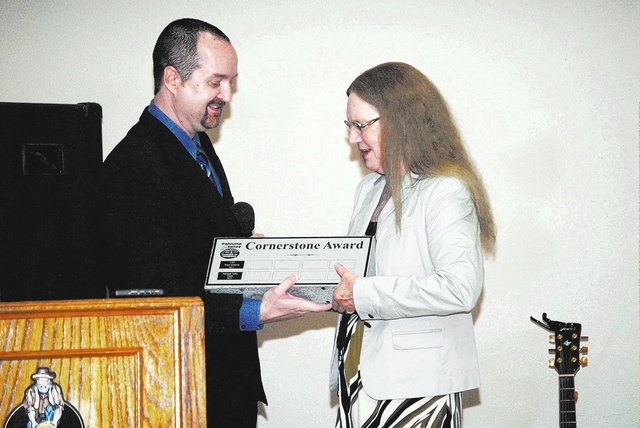 The Pahrump Chamber of Commerce handed out the cornerstone award to the Pahrump Valley Times at its annual inauguration dinner Friday night at the Pahrump Nugget Casino.

The cornerstone award, given out each year, honors a business that’s demonstrated it’s a vital part of the community, outgoing chamber president Brian Strain said. The PVT has been an influence in the community for more than 40 years, he said, beginning with the first edition published on Dec. 23, 1971, when it was a monthly publication promoting the local land boom. In five years it grew to become a weekly.

“The Pahrump Valley Times style of community journalism develops and fosters relationships with members of our community,” Strain said. “They work in conjunction with local businesses, nonprofit organizations, community leaders to bring us the news and events important to the people that live in our community. In an ever-changing society, where people get their news from blogs, Facebook, Twitter and larger circulation, traditional newspapers, the Pahrump Valley Times’ success is just incredible because it continues to focus on the people in the community, bringing you what’s most important.”

Strain said the newspaper publishes local news, high school athletics, local events, entertainment, politics and business highlights. He singled out the PVT’s weekly business profiles, which acquaint people with different businesses and entrepreneurs in the community. He also lauded the PVT for supporting the local chamber of commerce at every ribbon cutting, which gives new businesses a boost.

PVT Publisher Marie Wujek said the newspaper knows how to help local businesses get their message out, but also covers nonprofit organizations.

“I couldn’t do anything without this staff. They’re tremendous and even though we’re not all here and present, it takes a lot of people. But we’re good at it,” Wujek said.

Moore said she was shocked but honored to get the volunteer of the year award. Strain said he was surprised to hear childhood hunger and malnutrition existed on such a scale in the community. Since Moore started Food for Thought at Manse Elementary School in 2008, he said it has grown from serving 30 children to more than 475 today, at four elementary schools, a middle school and a high school.

“I was surprised to hear hundreds of children will go home from school and not have a meal ready for them when they come home,” Strain said. “Most people have empathy for childhood hunger, but it was one person who took action to solve this problem. The Pahrump Food for Thought program is a program that sends a backpack of food home for a child over the weekend so that when they return to school Monday morning they can focus on an education instead of focusing on hunger.”

Strain said he had first-hand knowledge about the volunteer organization of the year, the AYSO, when he brought his daughter to the Bob Ruud center to sign up for soccer and was recruited to be a coach.

“I just wanted my daughter to play soccer. I had no interest in being a coach,” Strain said. “But these people are incredibly persuasive and their sales skills far surpass that of an insurance agent. They looked at me and said ‘Brian if you don’t agree to be a coach, there may be some little girls out there who won’t be able to play soccer this year’ and I swear one of them worked up a little tear in his eye just to seal the deal.”

He said the local AYSO region 808 is a nonprofit organization that has affected thousands of children’s lives in Pahrump for more than 20 years. Twelve member board of directors dedicate their time and energy to the program, which involves more than 500 children and more than 200 games.

“When you drive by Ian Deutch Park and you see the streets packed with cars and kids out in the field kicking a soccer ball and people dressed in colorful uniforms, you can thank AYSO,” Strain said. “So when your children come home excited about playing soccer and meeting new friends, you can thank AYSO; and when your child doesn’t get in trouble because they want to play soccer, you can thank AYSO. The values and morals these children learn on the soccer field is something they’re going to take with them the rest of their lives.”

Incoming chamber president Debbie Davis said when she was elected to the board two years ago the chamber was just recovering from a rough patch. She encouraged members to advertise in the chamber’s magazine to reach thousands of recipients and advertise on the Shop Local billboard, since many can’t afford their own billboards.

Davis said she was excited about the chamber’s inaugural balloon festival, involving balloonists from 20 western states, scheduled March 7-9 at Petrack Park. She said a few sponsorship spaces are left on the balloons.

“As owners and operators of businesses in Pahrump, we are all concerned with keeping our businesses growing and increasing tourism in Pahrump. The more people coming through Pahrump, the more we hope they will spend dollars locally,” Davis said.