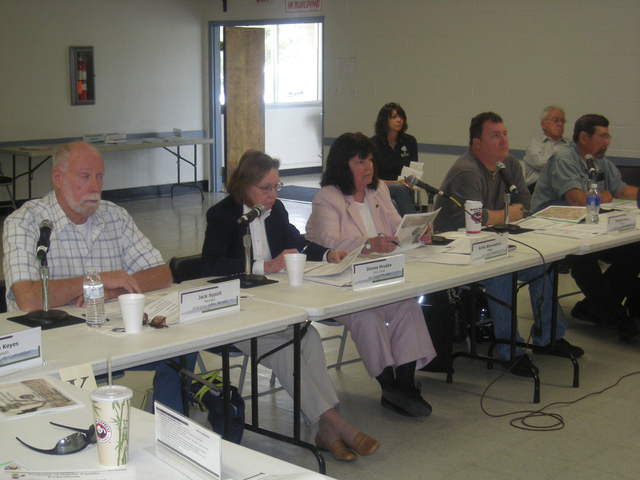 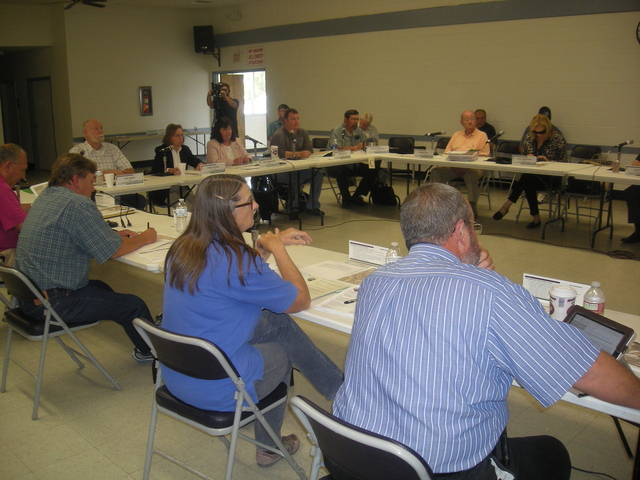 The DOE has been looking at shipping 403 canisters of uranium, part of the Consolidated Edison Uranium Solidification Project (CUSP), to Area 5 on the NNSS for years, but Gov. Brian Sandoval expressed concerns about the shipments.

“We’ve been looking at this issue for a number of years but because of the letter that was submitted by the governor to the secretary last summer, a high level working group was established that continued to look at an engagement dialogue and transportation and disposal issues related to those shipments,” Wade said during a meeting of the board at the Bob Ruud Community Center.

A governor’s working group held a recent meeting in Washington, D.C. to look at transportation and preparedness, he said. The next meeting is scheduled in August.

“The department is still looking at addressing all the state’s questions on this so there is not a shipment schedule planned for,” Wade said. “As we complete every one of these interactions with the state, with the working group, the next thing we always do is a robust briefing of the Nevada delegation.”

About 120 people packed the Nevada Treasure RV Resort conference center in Pahrump last November to ask questions about the safety of the shipments. Each canister will contain about 76 percent uranium 235, about 5.72 pounds and a little under 10 percent uranium 233. The DOE said it wasn’t weapons grade material, but if opened, would generate a very high gamma radiation dose.

“The key thing to take away from this is stakeholder interactions in emergency preparedness,” Wade said.

The DOE held a tabletop emergency exercise in May. The next step will be a one-day comprehensive training of emergency responders this summer, like the Nevada Highway Patrol, Clark County Fire Department and Nye County fire response, Wade said.

“You can never prepare too much,” Wade said.

On another project, Wade said the DOE began a peer review on one of the corrective actions with groundwater at the NNSS about a month ago, reviewing a groundwater characterization model.

The NNSS site specific board will get a couple more briefings on that project, he said.

“On routine waste activities, our current projection for our waste volume of Area 5 low level waste disposal facilities is still looking at somewhere around 1.3 million cubic feet. We are pretty much on our projections for this year, there have been no major incidents coming up but I believe there is always room for improvement. What we are going to continue to do is seeking out the advisory board’s thoughts on better ways to interact on low level waste management as well as the local communities needs as well as involve the Nye County Commission,” Wade said.

Rob Boehlecke, DOE environmental management operations manager, gave a briefing on the low level waste shipment process. Boehlecke said 5 percent of low level nuclear waste from facilities in the DOE complex like Savannah River, Ga. and Paducah, Ky., are disposed of at the NNSS, 91 percent of it is disposed of on the site where it was generated.

In a letter addressed to the DOE acting assistant secretary for environmental management, members of the Environmental Management Site Specific Advisory Board said the federal 2014-15 fiscal year budget is insufficient to meet cleanup obligations. The board said the DOE needs to honor agreements and milestones set between the federal government, states, tribes and affected stakeholders in a timely fashion.

The committee said continued use of facilities past their design lives increases risk, like recent reports of leaking double shell tanks at the Hanford, Wash., site. Much of the easier cleanup work has been done, and cleanup at sites like Fernald and Rocky Flats, Colo., have been completed. Many remaining sites are the most difficult and expensive, like Paducah, Ky., the board said.