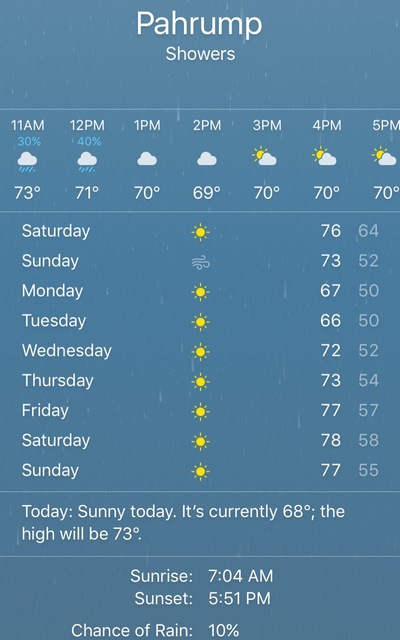 The work week will end the same way it began this week in town, rainy.

The National Weather Service said that there is a 40-percent chance of showers today for the Pahrump Valley. This is on the heels of Monday’s rain that saw over an inch dumped in the area.

At this point, the weather system that is bringing the rain chances is not expected to reach precipitation totals anywhere near Monday’s.

“It looks like up to a tenth of an inch of rain can be expected,” said Jim Harrison, National Weather Service meteorologist.

Winds will also kick up with the storm system, as sustained winds of 10 to 20 mph are expected today.

The stormy conditions will begin to clear out tonight, with precipitation chances dropping to 20 percent. By Saturday morning the system will have moved to the east, leaving mostly sunny conditions, with a high near 81 degrees expected.

The rain chances return for the end of the weekend, but won’t put a damper on Halloween festivities on Monday.

“Sunday will be mostly cloudy with a 20-percent chance of rain,” Harrison said. “Monday will be partly cloudy.”

Sustained winds of 15 to 25 mph will blow the system out of the valley before Halloween Monday.

The high on Monday will reach 70 degrees, with a temperature of about 55 degrees as the sun sets and trick-or-treaters take to the neighborhoods going door-to-door, collecting their bounty of sweets.

Mostly sunny conditions will rule the rest of the work week. High temperatures in the low 70s will dominate through Thursday, with overnight lows dipping into the low 50s during the period.