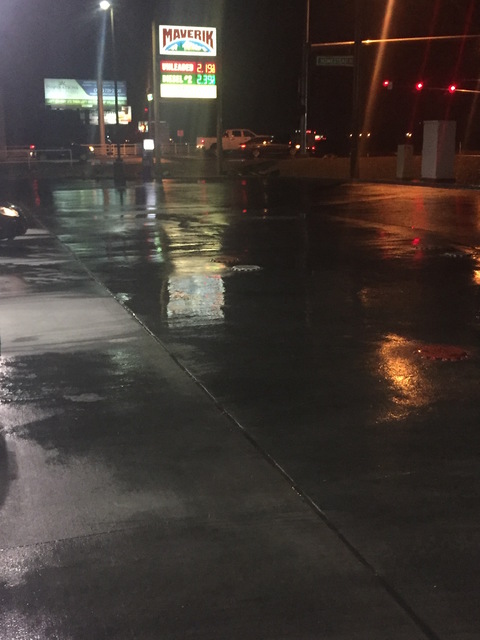 Pahrump residents should expect a wet day Friday, as a storm that began dropping rain on the valley Thursday will linger over one more day.

The National Weather Service said there is a 70 percent chance of rain Friday morning, with that chance falling to 40 percent by late afternoon.

Meteorologist Chris Outler said that rain totals could be fairly significant with the two-day-long storm.

“We have a storm system that is coming in from California, which will spin a lot of Pacific moisture into our area,” Outler said. “We are looking at anywhere from .25 inches up to .50 inches with the storm.”

Despite overnight lows in the mid-30s, Outler said that now snow flurries are expected in town, and in the nearby mountains, including between Pahrump and Las Vegas.

“There might be some accumulation as low as Mountain Springs,” he said. “It’s not going to be more than an inch or two at the most.”

The area will dry out Saturday and Sunday with sunny conditions and highs of 58 degrees and 56 degrees respectively. North winds up to 10 mph are also expected as the storm makes its way out of the region.

The sunny conditions will persist through much of the work week with high temperatures ranging between 56 on Monday and 60 degrees on Thursday.

Low temperatures will fall between 31 degrees on Monday and 42 degrees on Thursday night.