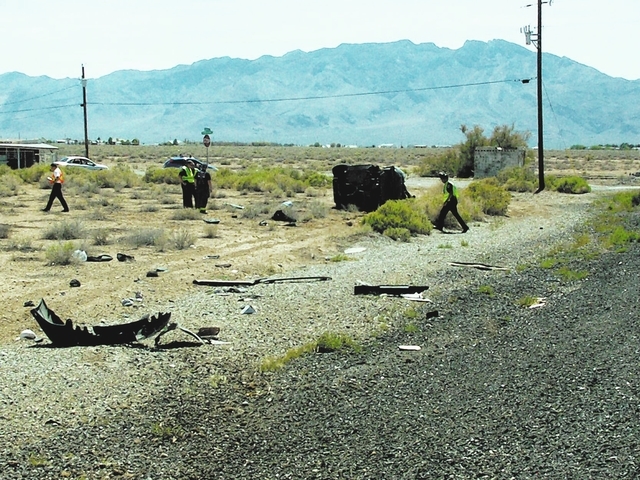 The Nevada Department of Transportation discussed several topics at the Nye Board of County Commissioners meeting Tuesday, among those was crash data at the county and state levels.

In the last five years there have been 2,138 total crashes in Nye County, with 1,358 being non-injury accidents and 735 including injuries, with 55 crashes resulting in fatalities.

There were 1,131 injuries in those 735 injury crashes, with 64 deaths in the 55 crashes with fatalities.

Despite the findings, NDOT stresses keeping drivers safe on the roads is their top priority.

“There’s no doubt our goal is safety,” said Sandra Rosenberg, NDOT assistant director in charge of planning. “Our goal is zero fatalities. No other goal is acceptable and we’re always working toward that lofty goal.”

In Nye County the number of non-injury accidents that occurred in Nye County with drivers considered, “apparently normal” was 80 percent, compared to 75 percent of injury-related crashes.

The number one reason fatal crashes occurred in Nye was due to drivers going off the side of the roadway, making up 26 percent of all fatal crashes.

That was followed by drove left of center at 15 percent, both failing to maintain lane and over-correcting steering at 14 percent each and exceeding speed limit at eight percent among others.

In injury-related crashes eight percent were found to be under the influence of alcohol, six percent were distracted drivers, and four percent were fatigued or sleepy, in addition to other factors with lower percentage rates.

The study showed that overall statewide crashes were up by 11, as there were 74 crashes at the time of the study compared to 63 the previous year.

Fatal crashes are consistent with the higher crash rate so far this year, seeing 79 fatalities on the roads this year, up 10 from last year’s 69 deaths.

With most types of crashes going down according to NDOT, one that isn’t is pedestrian related incidents, which is getting increased attention this year according to Rosenberg, especially in the Las Vegas area.