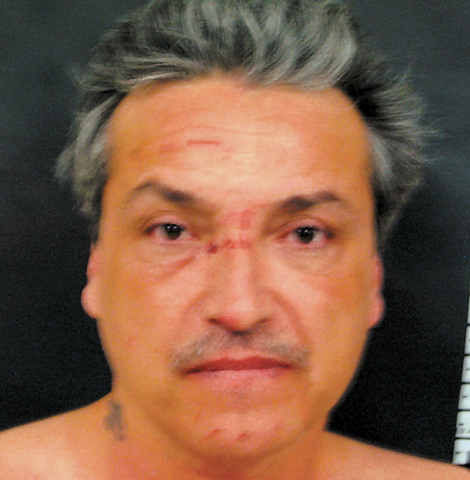 A wanted man listed as a “predatory sex offender” by the Oregon division of parole and probation was arrested in Pahrump Sunday for allegedly failing to register as a sex offender with local police after he crashed his motorcycle on Mountain Falls Boulevard.

Anthony Romero Griego Jr., 51, was taken into custody on charges of a sex offender failing to register, using information of another to avoid prosecution, obstruction of a peace officer and several traffic violations after he allegedly lied to Nye County Sheriff’s deputies about his identity when they responded to a report of a single-vehicle accident involving a motorcycle near Mountain Falls Boulevard and State Route 160 just after 6 p.m.

When police and Pahrump Valley Fire Rescue Services first arrived on scene, medics assessed the man’s injuries while an NCSO deputy began an investigation of the accident.

According to Griego’s arrest report, when the officer found the man’s wallet, he noted the man had two credit cards inside with the name Anthony Griego on them, but no driver’s license.

As medics placed the injured rider into a waiting ambulance to take him to the hospital, the deputy asked the man for his date of birth in an attempt to see if he had a valid driver’s license on record.

Griego allegedly told the deputy his name was “Galindo” and provided him with a date of birth.

After Griego was transported to the local hospital, police continued to try to locate a record for “Galindo.” When police were unsuccessful in finding any information on the man’s identity using just his name and date of birth, they asked for his social security number as well.

When dispatch operators were still unable to find any records of a “Galindo” in any state with the given information, they checked the name on the credit cards in the man’s wallet instead.

According to a declaration of arrest in the case, police were then able to locate a record for Griego with a date of birth exactly three years off what the man had given at the scene of the accident.

Griego’s arrest report noted the social security number he provided was only several digits off of his true number and was registered to a deceased man in California.

Police also discovered Oregon Parole and Probation had a warrant out for Griego’s arrest as well.

The sheriff’s department said Oregon listed Griego as a “predatory sex offender,” with a criminal record including charges of rape and sodomy.

Oregon Parole and Probation then sent the NCSO physical identifying information for Griego, including several tattoos and an amputated finger, as well as a photo. Griego’s arrest report stated the information corroborated Griego’s true identity.

When police confronted Griego with the information, the man allegedly continued to deny that was his name and asked to speak with a lawyer before answering questions.

The Oregon arrest warrant’s area of extradition reportedly did not include the state of Nevada. The sheriff’s office stated Oregon is currently in the process of petitioning the court to extradite Griego back to Oregon from Nevada.

As of Thursday morning, Griego remained in custody in lieu of $150,000 at the Nye County Detention Center.