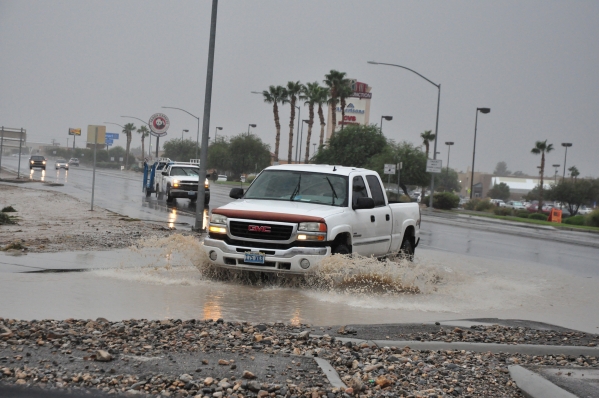 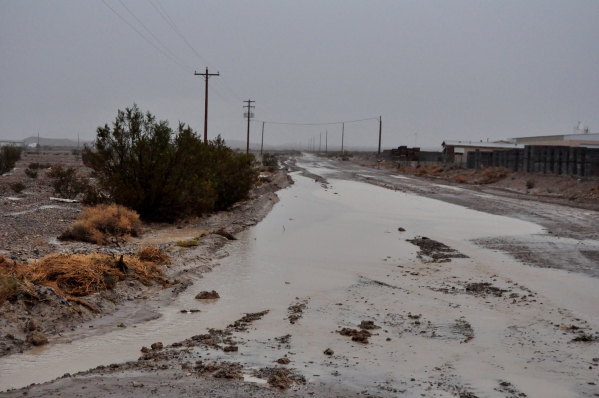 Wild weather caused havoc all over the Pahrump Valley and surrounding areas Sunday, affecting motorists and tourists at a nearby popular destination.

The National Weather Service said Pahrump received 1.23 inches of rain from Sunday at 8 a.m. through Tuesday at 8 a.m. There was a half-inch of rain Tuesday, which was a daily precipitation record.

Sunday alone saw .73 inches of rain in town, which was also a daily precipitation record, that prompted several weather warnings including a severe thunderstorm warning and a flash flood warning, caused various problems on valley roads.

A portion of Highway 372 saw limited lanes, as crews had directed traffic at the height of the storm due to lanes being inoperable due to the flooding, according to Adrienne Packer of the Nevada Department of Transportation.

Media outlets over the hump reported that a portion of Highway 160 between Las Vegas and Pahrump was shut down for a period of time on Sunday, but both NDOT and the Nevada Highway Patrol said there were no known shutdowns of the highway.

“After checking with the troopers out in the area, no one was aware of any closures on SR-160,” said Loy Hixson of the Nevada Highway Patrol.

There was flooding on Highway 160 and Basin Avenue, which caused drivers to be cautious traveling through the intersection and created a mess once the rain subsided.

No long-term issues were created on the highways, but NDOT crews were out on cleanup duty along stretches of Highway 160 and Highway 372 Tuesday. The operation was scheduled to be completed by Wednesday.

“There was no infrastructure damage,” said Tony Illia of NDOT. “We currently have two brooms and a wheel loader out there cleaning up debris and gravel that washed across the roadway (Highway 160).”

Just outside of the county, several visitors at Death Valley National Park found themselves stranded for some time after flash flooding ravished the international tourist area.

In a statement, a Death Valley spokesperson said that rains began in the area at 10 a.m., and cloudbursts with heavy rains occurred between 11 a.m. and 12:30 p.m., dropping .55 inches of rain at Furnace Creek.

In addition, flash flooding on California 190 near Zabriskie Point and north of Furnace Creek blocked traffic out of the valley.

Rangers directed visitors to Furnace Creek, where hundreds of visitors waited out the storm at the Visitor Center and Furnace Creek Ranch complex.

“Caltrans did a terrific job of reopening California 190 as soon as possible, and continued to work throughout the night,” said Superintendent Mike Reynolds. “However, many other roads in the park remain closed. We have more rain in the forecast for today, so visitors should be aware that California 190 could be closed again today at any time.”

The wet weather in the area exited as quickly as it came, as forecasts call for more seasonable weather as Wednesday through Tuesday have highs slated around 90 degrees with sunny conditions.