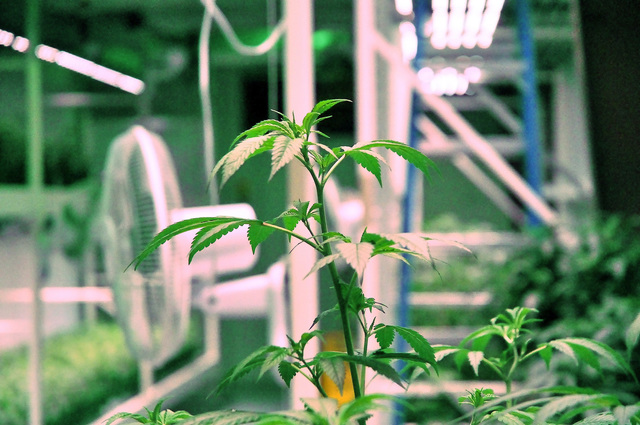 Horace Langford Jr. / Pahrump Valley Times If Nevada voters passed Question 2 legalizing recreational marijuana, it will likely be more than a year before the state adopts regulations overseeing the industry.

CARSON CITY — Nevada voters might have legalized recreational marijuana Tuesday. But even if they did, that doesn’t mean adult consumers will be able to walk into a pot shop to buy weed on Jan. 1, when the law would take effect.

There is still a hazy path to navigate, and it could take months for lawmakers and state officials to set up a regulatory structure to fully implement it.

Question 2 on the ballot would allow adults 21 and older to possess up to an ounce of marijuana or up to one-eighth of an ounce of cannabis concentrate. That part would become law in January.

But lots of details would still need to be worked out before it is sold in stores. Those debates would come in the 2017 Legislature when it convenes in February and in regulatory hearings that would follow.

“The law has some specific requirements but lots of vague areas,” acknowledged state Sen. Tick Segerblom, a Las Vegas Democrat and proponent of the measure.

Under the measure, the Department of Taxation would have a year — until Jan. 1, 2018 — to adopt regulations implementing the law.

Those regulations must address such things as licensing procedures and qualifications, requirements for security measures, product testing, packaging, recording keeping and tax collections.

But it will be up to state lawmakers to provide guidance through legislation on what those standards should be.

“There is going to be a lot of legislation,” said Pat Hickey, a former Republican assemblyman from Reno who is helping to lead the campaign against Question 2.

He said laws will be needed to regulate marijuana potency, packaging, labeling and advertising — details not addressed in the initiative itself.

“It will definitely have an impact on the next legislative session should it pass,” Hickey said.

Once regulations are enacted by the department, only people holding existing certificates to operate a medical marijuana facility could apply for a recreational pot license for the first 18 months. Likewise, only licensed liquor wholesalers would be able to get a marijuana distributor license during that time period unless the department determines more are needed than are available.

Nevada voters approved medicinal marijuana in 2000, but it was 13 years before lawmakers passed legislation authorizing retail sales. It took more than a year after that for regulations to be adopted. Nevada’s first medical marijuana dispensary opened just last year.

Medical marijuana is regulated by the Division of Public and Behavioral Health. Oversight of recreational pot would fall to the Department of Taxation.

Segerblom said he’d like to use the model created by the health division and move all marijuana regulatory duties to taxation “so you don’t have to reinvent the wheel.”

Hickey questions such a move.

“I think a question to be asked is: How well-equipped is the Department of Taxation, really, to administer and implement this law should it pass?” he said.

He pointed to the new commerce tax and the time it took the agency to adopt regulations and tax forms that some businesses complain are confusing and difficult to understand.

“It’s taken them 14 months and it’s still a big, fat mess,” Hickey said. “Businesses are still trying to figure it out.”

Recreational pot would be taxed at 15 percent of the wholesale price when sold by a grower.

Segerblom said those differences could be easily accounted for because all marijuana products have bar codes. A medical marijuana dispensary licensed to sell recreational pot “could divide the store,” with one part offering pot for medicinal purposes and the other selling pot for fun.

While Nevada’s medical marijuana law gave local governments authority to prohibit medicinal pot shops within their jurisdictions, there is disagreement on whether the same would be true for sales of recreational pot.

Segerblom says it does. He points to language that says the initiative does not prohibit “a locality from adopting and enforcing local marijuana control measures pertaining to zoning and land use for marijuana establishments.”

“The reality is through zoning and other things, they can just say we don’t want to do it,” Segerblom said.

But Hickey says that language is fuzzy.

“There is not clear opt-out language,” Hickey said. He fears that if the initiative becomes law and recreational pot sales become legal, any local efforts to ban them would face court challenges and could result in unwelcome rulings.