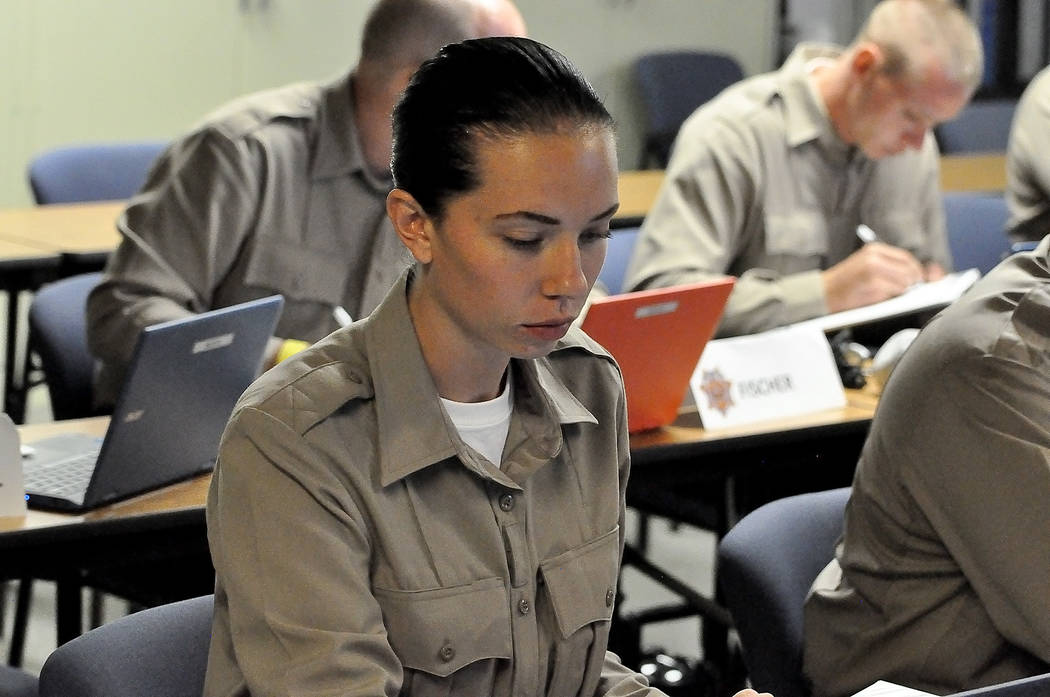 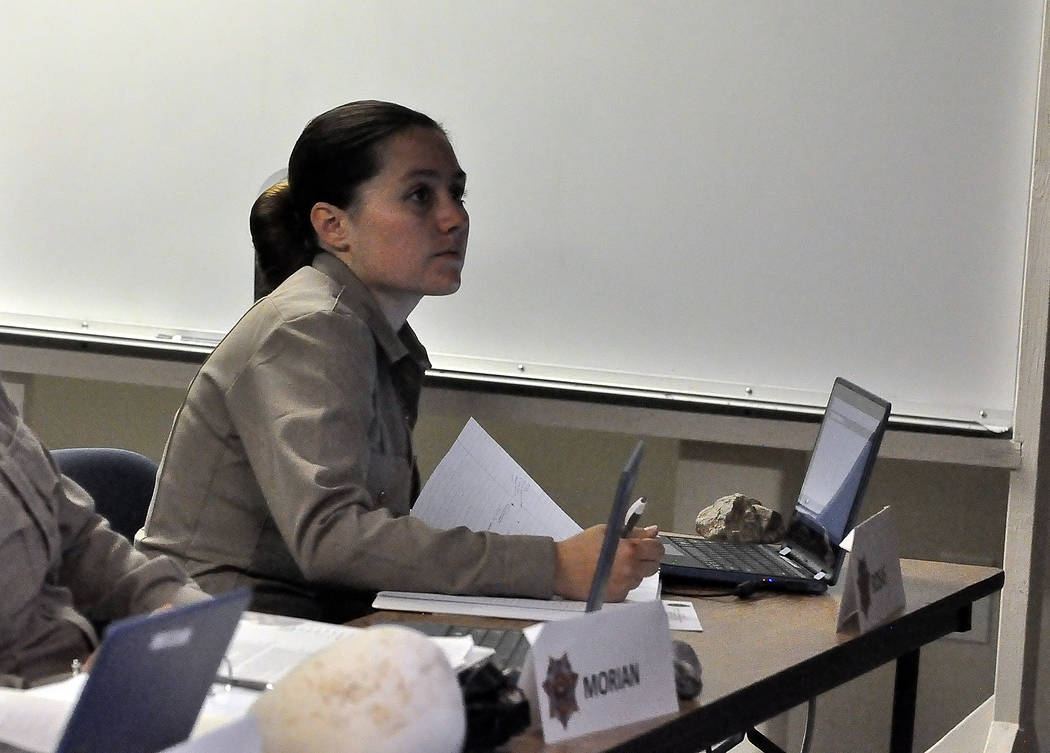 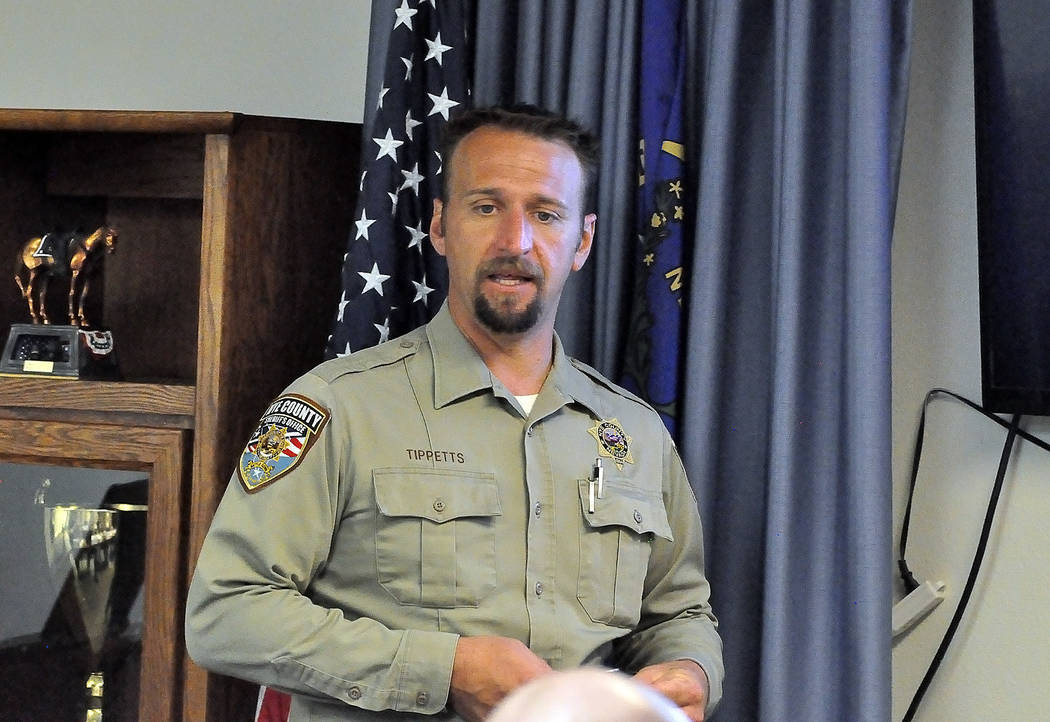 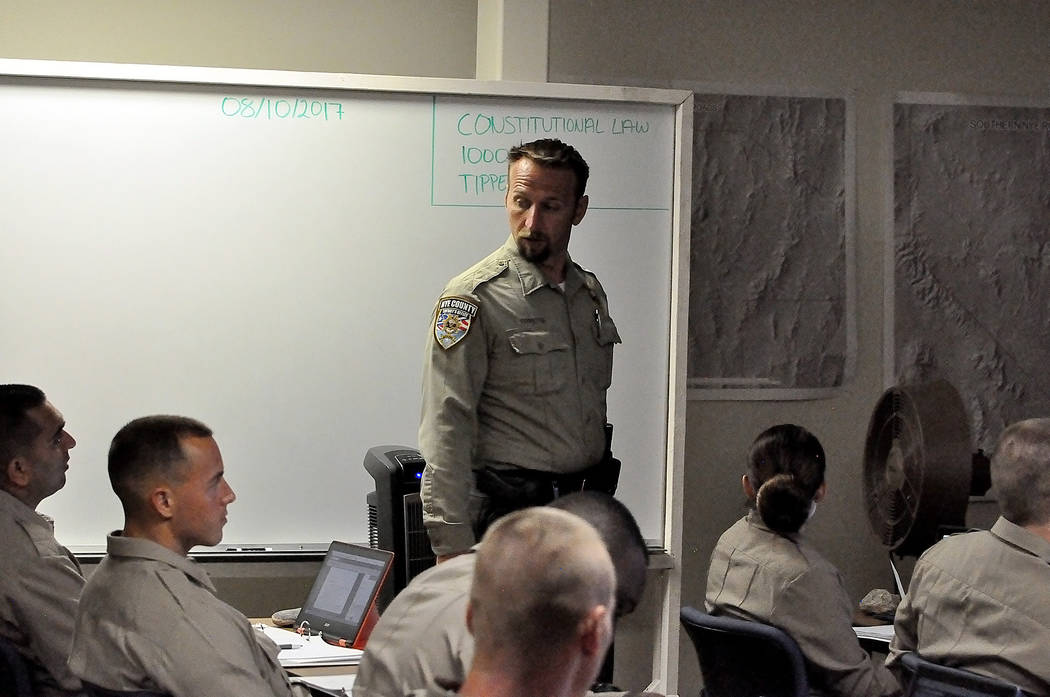 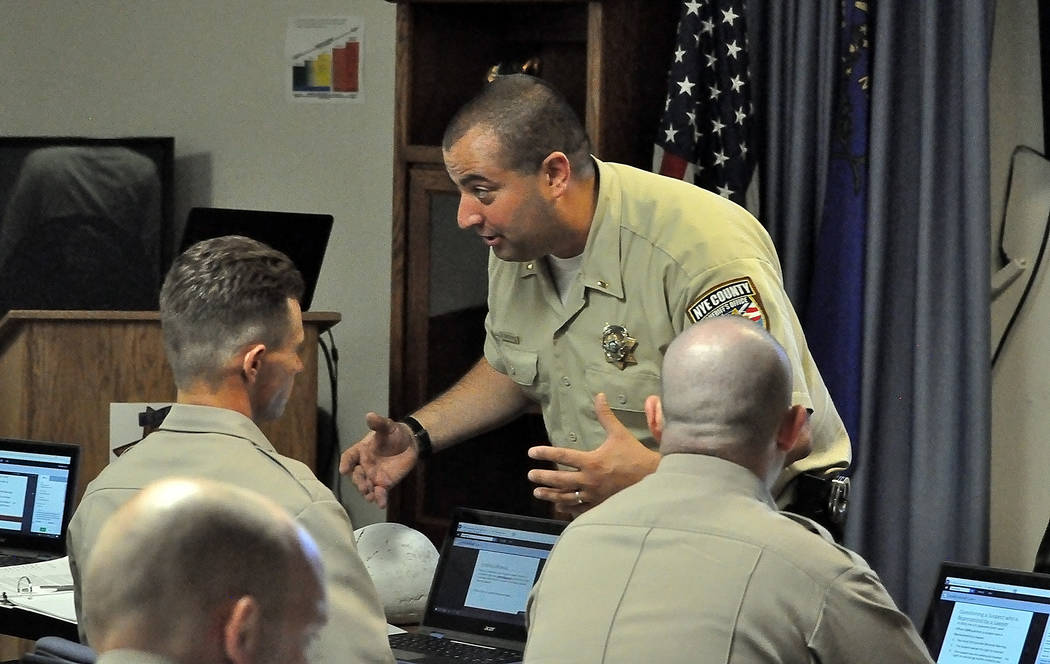 Treat everybody with respect until they no longer deserve it.

Those are the main words that Adam Tippetts, the training coordinator for the Nye County Sheriff’s Office Regional Training Academy, wants his recruits to take away.

On a recent Thursday, Tippetts stood in front of 12 recruits teaching them constitutional law, clicking through a slideshow and talking about Miranda rights.

“The constitutional law is an extremely large part of law enforcement, and if I can stress to them the importance of respecting people’s constitutional rights, then I feel that I’ve done a large part toward making good, competent officers,” Tippets said.

The Nye County Sheriff’s Office Regional Training Academy started on Aug. 7 and will last for the next seven months. On their second day, recruits went through Black Tuesday, the initial step that’s designed to determine if they are cut out for the profession.

Nye County Sheriff Sharon Wehrly said not everyone makes it through. On Black Tuesday, recruits get tested not only on their physical strength but also on their ability to handle high-stress situations.

In addition, the academy emphasizes the value of integrity in law enforcement and teaches recruits basic skills that they need on a daily basis such as firearms, defensive tactics and people skills.

“Ethics and integrity are the two biggest things, and normally the areas where we lose the most recruits. If you find any integrity issues, we don’t make any hesitation to send them on their way,” Tippetts said.

Tippetts said the academy is structured as a high-stress environment which allows integrity and ethics issues come to the forefront.

“It comes up in many different ways,” Tippetts said. “We found an academy recruit in the past who violated the rules, they are required to have their lunch here on campus, and he decided that he didn’t want to follow that rule, and he left to go get some lunch. … If he is not willing to follow those simple rules, then how can we expect him to follow more strict rules?”

During the academy, recruits learn a set of disciplines, some of which are specific to Nye County.

“Nye County is different than most other counties in the nation. We have things like brothels, fireworks, wineries,” Tippets said.

He said people from other states aren’t always used to seeing others carrying their firearms.

“And we have to teach them that it is perfectly legal and in fact, constitutionally protected, and that’s something that they will encounter on a daily basis in Pahrump, that they need to not overreact to those situations, and again, respect their constitutional rights,” Tippetts said about recruits.

The recruits are also criticized based on their appearance, their ability to put their uniform together, their attitude and citizenship.

Tippetts said while recruits often ask how to behave in specific situations, there are no standard examples.

“There is no cookie-cutter answer to every situation. Somebody told me a very long time ago, that law enforcement is a very gray environment, it is not black and white where everything can be simplified down to a basic set of rules. You can teach a basic set of concepts, but then, they can be applied many, many different ways in any situation,” Tippetts said.

Tippetts compared being in an academy to learning a foreign language.

“You can memorize phrases and terms and recite a bunch of things, but it really takes that click moment, when it all kind of sinks into the brain, and then, all of a sudden, it becomes second nature,” Tippetts said.

Recruits are hard to find

Finding recruits has proven to be a hard task for the Nye County’s Sheriff’s Office. After starting the initial push in April, the recruiting process was finalized last week.

The Nye County Sheriff’s Office Regional Training Academy currently has categories one and three training together.

Out of 12 recruits, one is slated for Tonopah and two will head to Beatty. The rest will be stationed in Pahrump.

“We have a very, very hard time keeping people,” Wehrly said. “When you can leave here after being here for four or five years, and you can go to places like Boulder City, and you can hire on part time, and make as much money as you make for a whole paycheck for 40 hours here, that’s quite a difference,” Wehrly said.

The people in the academy are going to be starting at $14.06 an hour as recruits, and $16.06 when they become trainees. When they go out on the street, they will be paid $18.06, the rate that is negotiated by the collective bargaining agreement with Nye County.

Still, Wehrly said her department tries to create incentives for their employees.

“We do have some incentives, we pay the whole Public Employees’ Retirement System, they don’t have to pay PERS out of their pocket. And we have a uniform allowance,” Wehrly said.

All of the recruits take a sheriff’s office final exam covering every subject that they learned, which is intended to build them up to the Nevada Peace Officer Standards and Training exam.

Wehrly took over the Nye County Sheriff’s Office in 2015.