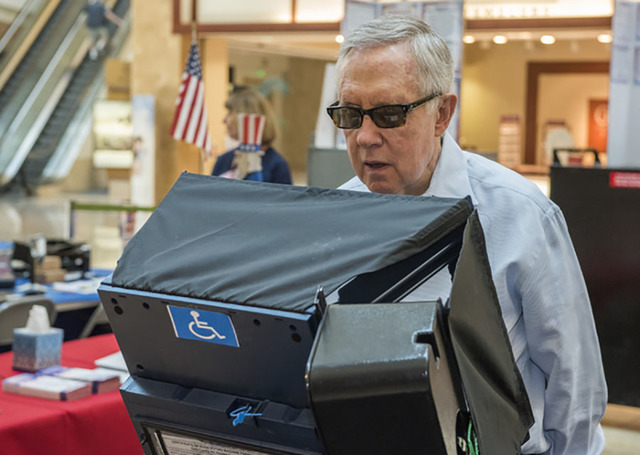 Reid, the Senate minority leader, has spent years using his position to prevent the mountain 90 miles north of Pahrump from becoming a nuclear waste storage site. He’s retiring when his term ends after the November election.

“I can’t imagine Yucca Mountain’s going to come back,” he said in a meeting Tuesday with members of the Las Vegas Metro Chamber of Commerce in Washington, D.C. The group traveled to Washington to spend the week visiting the congressional delegation and learning about public policy issues.

Re-engaging with the mountain project would cost $100 billion, Reid said, adding that nothing is at the mountain.

“There’s nothing out there now,” he said, adding that some of the previous equipment was “ground up for junk.”

Reid said he recently lunched with former Vice President Al Gore and credited Gore with his success in stopping Yucca Mountain from going forward during the Clinton administration.

“It starts with Al Gore because he was my advocate with Bill Clinton,” Reid said.

U.S. Rep. Cresent Hardy, whose Fourth Congressional District includes the Yucca site, said Thursday that the issue is not closed.

“At the end of the day, Yucca Mountain isn’t about any one person’s legacy. It’s about building consensus and doing what’s best for Nevada. As long as I’m in Congress, I will continue to be a strong voice for all Nevadans on this issue,” saidRepublican Hardy.

Nye County Commissioner Dan Schinhofen said Nevadans deserve to hear the science after $15 billion and 30 years of work have been spent on the project.

“We put a man on the moon in less than 10 years and here we are over 30 years later with a hole in our mountain,” Schinhofen said. “The ‘ground-up junk’ he refers to was also a plan he had, but much of the offices and equipment was given to local governments.”

Nye County is among nine counties asking for the science to be heard, Schinhofen said.

“Why the people against this project will not allow the science a fair hearing makes me wonder what they are afraid of,” he said. “The state has 218 contentions and we welcome them being heard. If it is found to be safe, who wouldn’t want the public works project that will last 50 to 100 years. This could be the biggest boost to Southern Nevada’s economy and we won’t have to give up tax incentives to get the jobs we desperately need.”