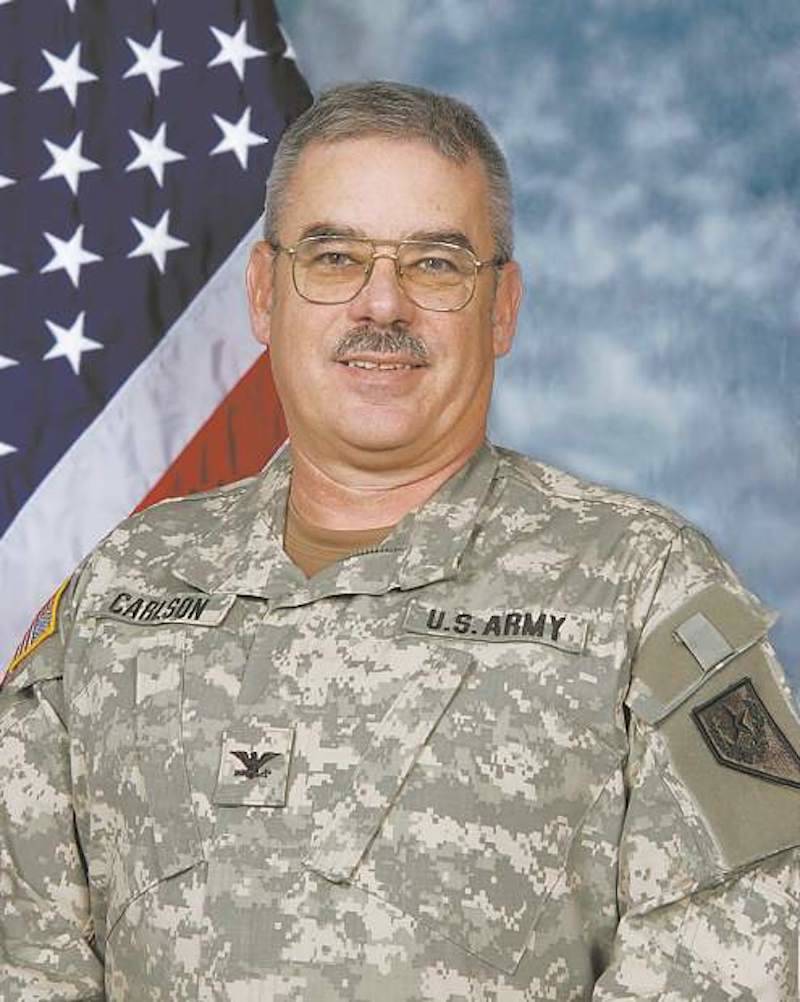 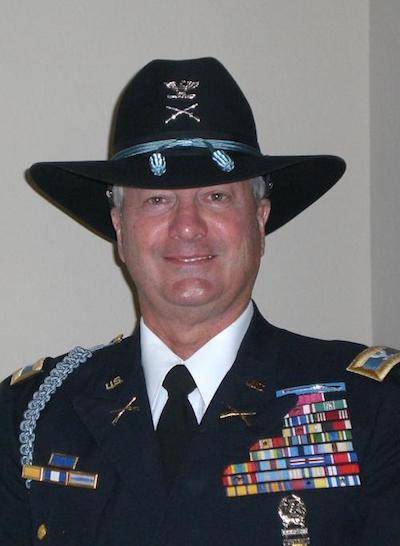 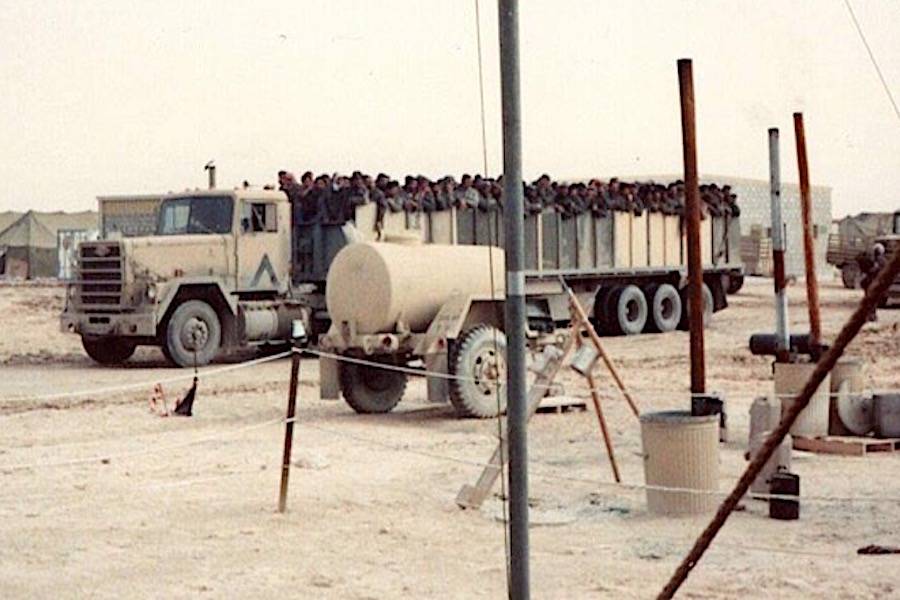 Col. (ret.) Michael Carlson/Special to the Pahrump Valley Times A truck brings in EPWs (enemy prisoner of war) on the third day of the ground war in late February 1991. The 72nd Military Police Company of the Nevada Army National Guard provided armed escorts. 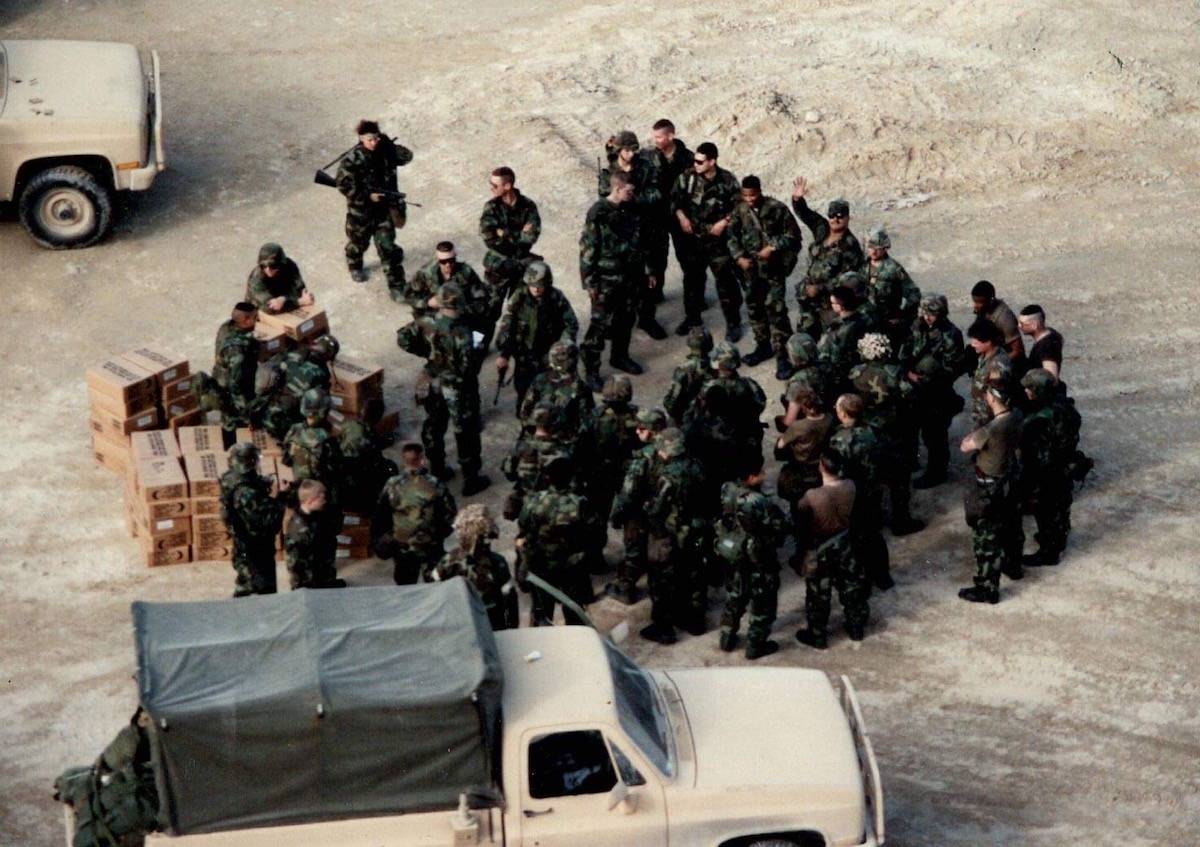 Col. (ret.) Michael Carlson/Special to the Pahrump Valley Times An overhead photo of the platoon shows the first operations brief for a combat patrol on Jan. 18, 1991. The 72nd Military Police Company of the Nevada Army National Guard deployed to Saudi Arabia earlier that month.

Iraq’s army, under orders from its strongman President Saddam Hussein, rolled across the border into Kuwait on Aug. 2 1990. Hussein made the unsubstantiated claim Iraq’s neighbor to the east was stealing oil from his country.

Once entrenched in Kuwait and especially in the capital city, the Iraqis refused to budge, even with stepped up diplomatic pleas to leave the country.

Saddam refused, so President George Bush’s Secretary of State James Baker worked with the United Nations for several months to organize countries into a coalition to push Iraq, which was considered to have the fourth largest army in the world, out of Kuwait. Three major resolutions demanded Iraq’s withdrawal from Kuwait, imposed economic sanctions and declared the annexation of Iraq’s neighbor as illegal.

Meanwhile, the United States began sending troops to Saudi Arabia, which became the major staging country, and coalition forces from 35 nations also prepared for war. U.S. Navy aircraft carriers began to position themselves in the region, but despite the numerous sessions in the United National, Iraq still refused to withdraw its army.

Retired Nevada Army National Guard Col. Michael Carlson led the state’s only ground unit as a captain to the Persian Gulf region, the 72nd Military Police Company with headquarters in Las Vegas and a unit in Ely. Before the unit relocated to Las Vegas, the headquarters were in Fallon. Soldiers, though, from many communities around the state served with the MP company.

Carlson first had an inkling of what was occurring in the region days after the invasion.

“I was the operations officer of G3 (training) at the time, and I got a call from my counterpart at the Presidio (Sixth U.S. Army San Francisco) and it was we have a room for you and we need to get here in the next 24 hours,” Carlson said, adding other soldiers from states in the Sixth U.S. Army were ordered to appear.”

Carlson learned the reserve units would play an integral part in the buildup of troops to drive Iraq out of Kuwait. He said he also talked to Maj. Gen. Tony Clark, Nevada’s adjutant general.

“I knew someone was going to go from the Nevada Guard, but I didn’t know who,” Carlson said.

From August through November, Carlson said the guessing game focused on which Nevada Guard unit would deploy. He said the 422nd Signal Battalion appeared as a strong possibility.

“We had nothing solid but word of mouth from (National) Guard Bureau,” Carlson said. “They were the first Army unit that we started planning with.”

After preliminary work and meeting with the command, the supposed plan to activate the signal battalion diminished. Eyes turned to a chemical reconnaissance unit, but Carlson said the company had hand-me-down equipment, so the state was trying to train up the soldiers. That plan also fizzled.

Before other members of the command flew to Elko for a meeting, Carlson had an operator access a top secret machine to check on Nevada units considered for deployment, especially the chemical unit so he could take viable information to the meeting.

“So we looked and nothing was there, so I had a little bit of time before catching the plane. I asked her (the operator) to check on Signal (422nd Signal Battalion), and nothing popped up,” Carlson said.

The operator then accessed the machine for information on the 72nd Military Police Company, a unit Carlson began commanding in 1989.

“She typed in our UIC (identification code) and all of a sudden, the machine went totally berserk. We had numbers, it showed my current USR (unit status reporting), it showed going to Dhahran, it had flight manifests. I thought ‘oh no.’”

Carlson said Hayes took the news well and made a comment. That was the end of discussion. At dinner in Elko, Carlson briefed other officers including the training officer.

Carlson shifted into a different mindset to begin changing the training based on the lessons learned from intelligence reports. After his San Francisco meeting, Carlson returned to Las Vegas. Soon, Troop Command, the 72nd MP’s commanding unit, became involved with the company’s training. State headquarters then made Carlson the full-time commander so he could concentrate on his company that was scheduled to depart in January.

“We knew if the Middle East blew up, the MPs would be the first to go,” Sage recalled of the meetings he attended. “The MPs were qualified and would go. If it were a combat unit, it would have gone to Fort Irwin to train up.”

By that time, Sage said the war would’ve ended. He said the need was there for an MP company that could perform enemy prisoner of war guard functions.

Troop Command also had a new training officer, Maj. Alicia Nyland, who spent a decade as a military police officer.

“We kept the unit at the highest readiness level,” the retired colonel said in a previous interview.

“We had offers of help but more in timing to getting things done,” Sage said.

In the meantime, Iraq still occupied Kuwait, and the United States and its partners were becoming frustrated with Saddam’s refusal to abide by the resolutions. Near the end of the year, the 72nd MPs knew their fate on their December drill weekend. Troop Command’s administrative specialists were in Las Vegas reviewing personnel files with the soldiers as part of the annual records review.

“Sgt. Canterbury and I had originally gone to Las Vegas on drill weekend,” said Sgt. Terry Hall, who lived in Fallon at the time.

Sgt. First Class William “Bill” Canterbury served as the NCO (noncommissioned officer) in charge of the administrative or admin section.

“Then the first of December, I was in Vegas, and (Col.) Mike Casey (deputy chief military support) called and told me I better check my fax machine and something has come up. I pulled the fax and the 72nd had been part of the 200k (200,000 select reservists) call-up. We had three days to pack our stuff and get out of town,” Carlson said.

Carlson pointed out the MPs would provide security for an EPW camp somewhere in Saudi Arabia. Although the next several days consisted of long hours, Canterbury and Hall reviewed and updated records at the Valley View Armory and reviewed completed officer and NCO evaluations to be processed and added to each soldier’s personnel file.

“That’s the first time we had to do anything like this,” Hall said. “We had to ensure paperwork was completed.”

Carlson laughed, saying he thought Canterbury and Hall lived in the unit because of the way they blended in. In Hawthorne at battalion headquarters 315 miles northwest of Las Vegas, the sections put in long hours to provide requested support. Sage and the personnel section worked with the families to update support while the solders headed to the Middle East.

From Las Vegas, the MPS headed to Fort Ord, Calif., north of Monterrey along the Pacific Ocean where they rolled into the 7th Infantry Division. Carlson noted an irony. It snowed at Fort Ord while the Nevada soldiers were training in an area to resemble the Middle East. Carlson said commander Major Gen. Jerry White made the Nevada Army Guard soldiers feel as though they were part of the team. When another office referred to the Nevada soldiers as guardsmen, White stopped the discussion.

“I don’t see any guardsmen in the room,” he snapped. “We’re all soldiers.”

Carlson also qualified as a military police officer at Fort Ord and was allowed to accompany the unit to Saudi Arabia.

After three weeks of training, the MPS returned home for three days at Christmas, returned to Fort Ord before convoying to Travis Air Force Base and then boarded three aircraft — two C141s and one C-5 — directly to Saudi Arabia. Carlson said the soldiers were transported to the Khobar Towers, an apartment complex near Dhahran and King Abdulaziz Air Base. On Jan. 1, 1991, Carlson said the MPs were assigned to the 403rd Military Police Camp, 800th Military Police Brigade, near Sarrar, a small village.

According to Carlson in an article for Battle Born magazine in 2011, he said the camp provided security for the units that built the POW complex.

“The facility included two compounds for prisoner housing, the infrastructure to establish two additional compounds, the housing and support facilities for more than 3,000 American military personnel and contractors, air strip use and the 5th Mobile Surgical Hospital.”

The coalition struck Iraq on Jan. 15 to begin the Desert Storm phase with an air attack on Baghdad, and afterward, Iraq retaliated by shooting Scud missiles toward Saudi Arabian and Israeli cities and military locations. In return, the Army fired Patriot missiles to intercept the Scuds from reaching their destinations. The ground war didn’t begin until the following month and ended within five days. The Nevada soldiers also faced the unexpected. During the MPs’ time in Saudi Arabia, Carlson said the unit processed an Iraqi soldier who lived in Chicago. He had traveled to Iraq to see relatives, but when hostilities broke out, he was drafted off the street.

“Our camp was pretty full at one time,” Carlson said, as numerous Republican Guard soldiers were captured.

Looking back at the events from 30 years ago, Carlson said he was very proud of the company. During the time, he had female squad leaders, and a national magazine wrote an article on them. The MPs returned in May days ahead of a big parade in Las Vegas and then back to Northern Nevada.

“It was a rare guard deployment,” he said of the Nevada’s company deployment in Saudi Arabia.