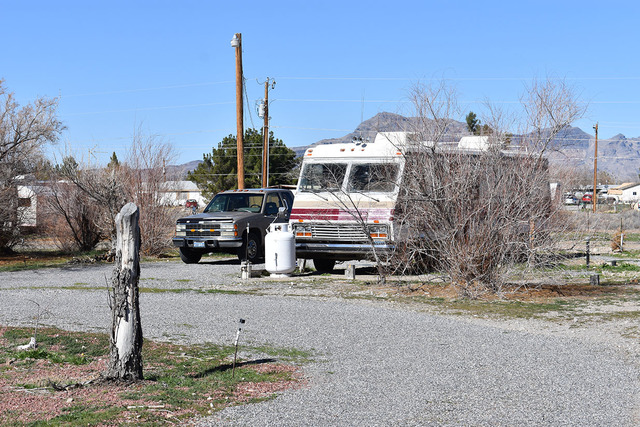 Resident Edward Schuler is asking Nye County District Court for a judicial review of the Pahrump Regional Planning Commission decision that’s prohibited him from putting a trailer on a parcel of land. Schuler wants to reinstate his grandfathered rights, so he can to put a trailer on his property. Daria Sokolova/Pahrump Valley Times

A resident is asking for a judicial review of the Pahrump Regional Planning Commission’s decision that prohibited him from keeping a trailer on his property.

Edward Schuler filed a notice of petition with the Nye County District Court on Feb. 1, after the commission’s decision to deny a conditional use permit application to allow the restoration of a grandfathered use of land was backed by Nye County commissioners.

“Their (RPC) findings are based on it not being harmonious in the general vicinity and such, well that’s not true because it’s just a matter of what size the trailer is going to be, that’s why I asked for a postponement, to try to find a trailer that will be in compliance,” Schuler said at Nye County commissioners’ meeting.

Schuler argued that the property had previously had a trailer home and a wooden porch.

In his application, Schuler said that he wants to reinstate his grandfathered rights so he can put a trailer on the property and live there, as he can’t afford a manufactured home.

Schuler asked to allow the restoration of a grandfathered use of the land, which has been operationally abandoned or discontinued for six months or more, according to the documents.

The 1-acre parcel zoned Rural Estates Residential (RE-1) where recreational vehicles are allowed only as temporary residential uses is located at 1610 W. Irons St.

The Pahrump Regional Planning Commission earlier denied Schuler’s conditional use application that would allow him to use a recreational vehicle trailer as a permanent residence. The decision was upheld by Nye County commissioners on Jan. 17.

“The point is, that in the Pahrump Regional Planning Commission we have certain rules, guidelines, laws, and the use of that in this area. We believe the board upheld those laws,” Nye County Commission Chair Dan Schinhofen said.

According to the findings of the Nye County Planning Department, the RE-1 zone doesn’t allow a recreational vehicle as a primary residence.

The proposed reinstatement of grandfathered use is contrary to the RE-l zoning regulations which allows only a site-built home or a manufactured home as the primary residence, and therefore, the requested conditional use permit is not in accordance with the zoning ordinance, and does not comply with required findings, according to a Nye County staff report.

In addition, Nye County is currently in the process of reviewing and possibly revising the regulations relating to RVs, guest homes, tiny homes and temporary RV uses. Staff suggested that approval of this request to allow a permanent use of an RV should not be granted at this time based on the pending code revisions.