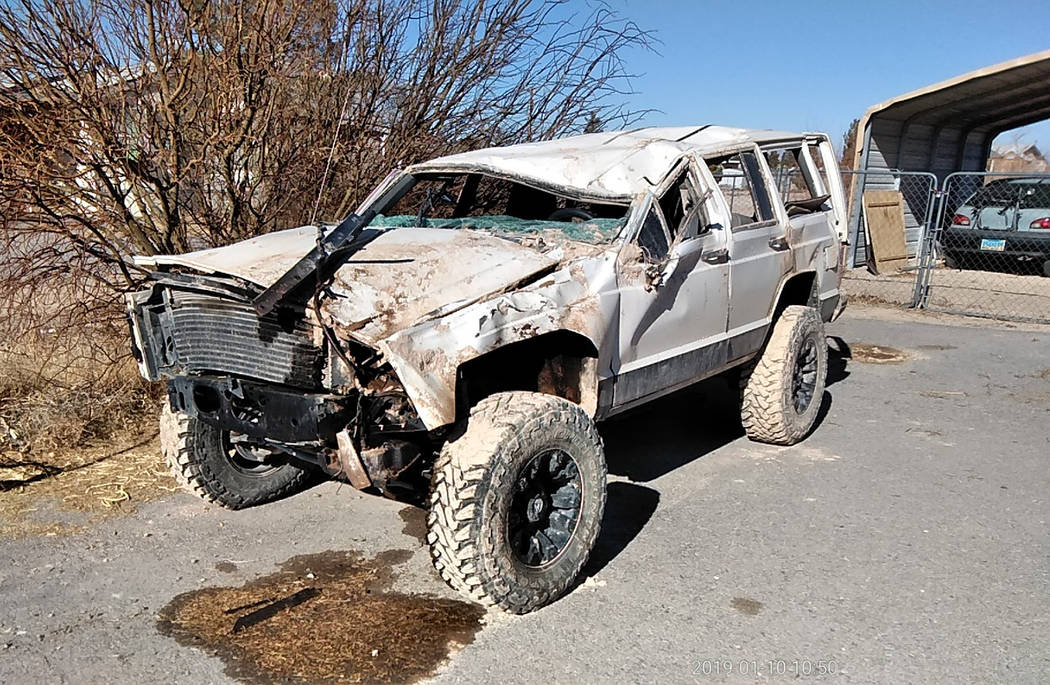 Selwyn Harris/Pahrump Valley Times Early last month, 20 year Pahrump resident Nathaniel Felix experienced a life-changing event after he rolled his 1996 Jeep Cherokee at dry lake bed on the southend of town. As a result of the crash, Felix became both medically and mechanically entrapped inside the upside down Jeep, where he had zero cell phone service. 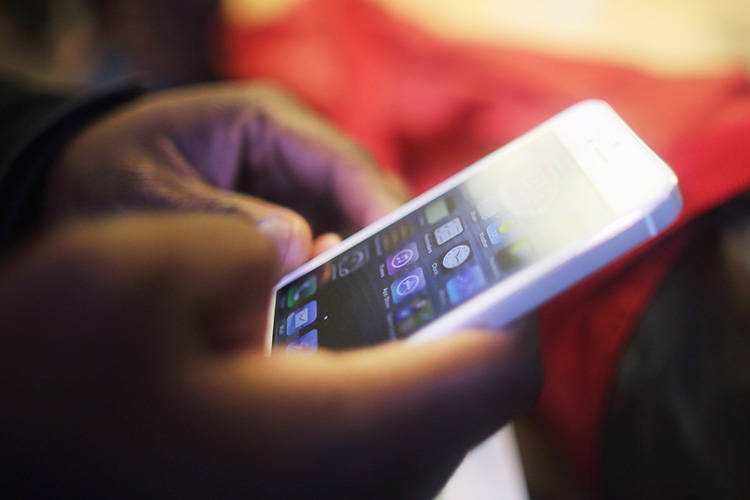 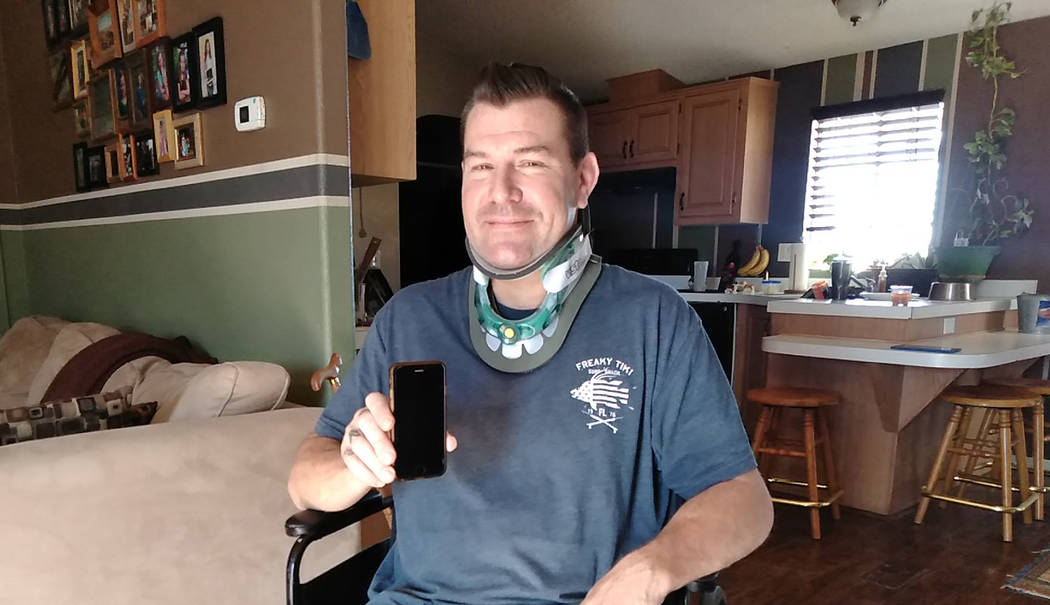 Selwyn Harris/Pahrump Valley Times Nathaniel Felix displays the phone he used to contact his Siri app, which in turn contacted first responders to his location. Felix said he believes his decision to use Siri just may have saved his life, as he was exposed to freezing conditions for at four hours.

Nathaniel Felix, a 20-year Pahrump resident, just wanted to do some off-roading at the dry lake bed on the far south end of town early last month when the unexpected occurred.

He said he routinely takes his 1996 Jeep Cherokee out for a spin, especially after it rains in the valley.

Early last month Felix experienced a life-changing event when he rolled his vehicle and became both medically and mechanically entrapped inside the upside-down Jeep, where he had zero cell phone service.

Felix said he tried calling friend after friend with the use of the “Siri” voice command app on his iPhone.

“It either did not respond because I wasn’t clear enough,” he recalled. “It would reply no signal or it replied with ‘sorry, cannot connect.’ I was just asking myself what’s next. I could not get out of the Jeep, so I just resorted to going back to the phone. Then I started wondering what would happen if I said hey Siri, call 911.”

“It said connecting and oddly enough, it connected me to Clark County dispatch,” he said. “It was dead quiet so without being on speakerphone, I could still hear her wherever my phone was, I did not have my phone in my hand. I was 80 percent paralyzed and I could barely move.”

Though Felix could not see the terrain around him, he was able to guide first responders to his location by the reflection of their headlights bouncing off his overturned vehicle.

“At that point, I did not know how many hours I had been unconscious,” he said. “It was about 4:30 or 5 when the accident happened. Search and Rescue said their arrival time was around 8:30 p.m. so I was unconscious for at least three hours. The dispatcher told me that rather than risking the call dropping out on her end, she was dispatching to Pahrump rescue as I was talking to her. In essence, Las Vegas Metro dispatch, dispatched Pahrump rescue into California to get me into a four-wheel-drive vehicle to bring me back where they had a helicopter waiting on the state line.”

Fortunately for Felix, he took his dog named “Pig,” along with him for the ride. “My dog absolutely stayed there and kept watch over me,” he recalled. “He was literally guarding me and he never left my side. His name is Pig. I tried to cuddle with him to stay warm through the night but after about 10 minutes there was just no way that was going to happen. He’s a blue nose pitbull terrier. He’s absolutely amazing and again, he did not leave my side.”

Additionally, Felix, clad in just jeans and a T-shirt, said the Siri feature just may have saved his life.

“If I had to shake a Magic 8 Ball, I’m sure it would say signs point to yes,” he admitted. “As far as Siri saving my life, if 35 degrees overnight in the middle of nowhere wouldn’t have gotten to me, it’s very possible. The whole time I was still on the phone with the 911 dispatcher, and I would tell them to tell Search and Rescue that I can see the reflection of their headlights. I told her to tell them to turn to the right and then turn back left because I couldn’t look directly toward them, because I couldn’t move my head but I could see the lights inside the cab of my vehicle. As soon as they reached me, I put the one arm out that I had the most strength in, and just started wiggling out the window, so they could see someone was in the vehicle.”

Thankfully, after his rollover crash, Felix is recovering from his injuries, as he’s now wearing a back brace and using a wheelchair to get around.

“I broke the C6 and C7 vertebrae and pushed forward and twisted the C4 and C5,” he noted. “The disc between the 6 and 7 was nearly completely out between the two, so there was about four different factors that could have made it a lot worse.”

Felix also said he believed the conditions on the lake bed contributed to his rollover crash.

“The whole accident happened at 35 miles per hour,” he said. “I was driving in a straight line after a good rain, so even like an inch of variance in the ground matters if water pools up. I began hydroplaning and started sliding sideways. I think I rolled three and a half times.”

Despite his experience, Felix said he will continue to go off-roading once he fully recovers.

“I’ve done it a million times and this was just a weird freak thing that happened,” he said. “I go to the same spot every time and I was out there literally a week earlier doing the same thing with my daughter. People who have been in car accidents continue to drive. I think if I had a lesser vehicle I probably wouldn’t be talking right now. The accident did not deter me at all. Maybe I’ll get a roll cage in the future. I think it’s safe to say that thanks to Siri, I am able to sit here and talk to you.”

To add tragic insult to his serious injuries, Felix also spoke about what he called a series of recent unfortunate events in his life.

“Within a month of each other, I lost my grandmother and my 10-year-old daughter lost her mom to cancer,” he said. “I also lost my job of seven years recently. I have a good friend that I’ve known since high school in Henderson, he’s been helping me out here and his sister has been helping me clean the house. I am very fortunate to have the good friends that I have. He also set up a GoFundMe account under Nathaniel Felix.”