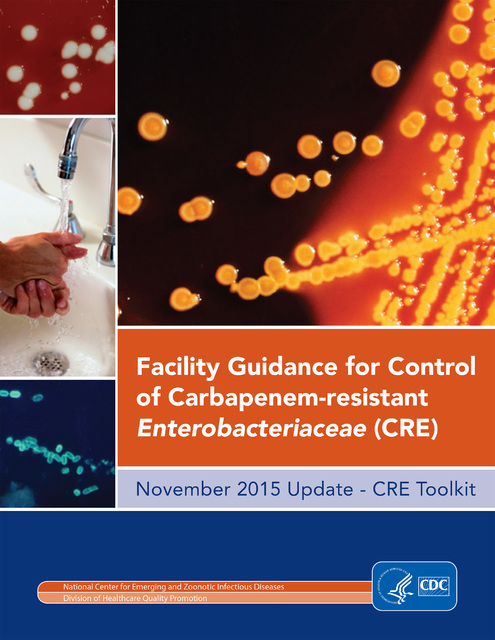 The cover of the Centers for Disease Control guidelines for dealing with carbapenem-resistant Enterobacteriaceae, or superbugs resistant to antibiotics. A Nevada woman died from a superbug last year after a trip to India. Special to the Pahrump Valley Times.

A Northern Nevada woman died last year from a bacterial infection resistant to all 26 antibiotics available in the U.S., highlighting the growing public health threat posed by so-called “superbugs.”

The woman, an unidentified Washoe County resident in her 70s who had traveled to India, developed septic shock and died in early September. The cause of her death was first publicly reported Thursday in an article in the federal Centers for Disease Control and Prevention publication “Morbidity and Mortality Weekly Report.”

Washoe County Health District spokesman Phil Ulibarri said the superbug case wasn’t publicized when it occurred because it was determined there was no threat to public safety.

“It was an isolated case, and there was no threat to the general population,” he said.

The woman was admitted to an unidentified acute care hospital in the county on Aug. 18 and initially diagnosed with systemic inflammatory response syndrome — a medical complication due to infection. But testing showed she was suffering from carbapenem-resistant Enterobacteriaceae (CRE), a normally benign bacterium that lives in the human intestines but can cause a range of illnesses when it gets into other areas of the body.

The article authors, medical professionals from Washoe County, the University of Nevada, Reno, the Nevada State Public Health Laboratory and the CDC, indicated they believe she contracted the infection during a series of hospital treatments for a broken femur in India. They isolated her after the diagnosis and subsequent tests of patients and the hospital have found no further CRE, the article said.

State health authorities say superbug cases remain rare but were not immediately able to provide statistics for Washoe County, Southern Nevada or the state as a whole late Thursday.

Superbugs — bacteria that can’t be killed by multiple antibiotics — are worrisome not only because of their resistance to common treatments but because they can transfer circular pieces of DNA called plasmids that contain resistance genes to other bacteria, said Karen Duus, a Touro University associate professor of basic sciences who specializes in immunology and microbiology. The other bacteria can then spread that resistance as well.

“If you’re a person who is older, who is immune suppressed … then you can have an issue if the bug gets away from your immune system” because there’s no treatment available, Duus said.

Dr. James Wilson, director of the Nevada State Infectious Disease Forecast Station at the University of Nevada, Reno, said the staff of the facility — which he also declined to identify — did their part in preventing the Washoe case from spreading by quickly detecting the disease, taking a good patient history and isolating the patient.

“They did a superlative job,” he said. “They did what needed to be done.”

But he warned that antibiotic resistance is becoming an increasing threat in the U.S.

Wilson, part of a team investigating antibiotic resistance in Nevada, said the problem is twofold: Patients request antibiotics for health issues that don’t require them and physicians accede to keep patients happy, sometimes even prescribing antibiotics that are not the best suited for the individual case.