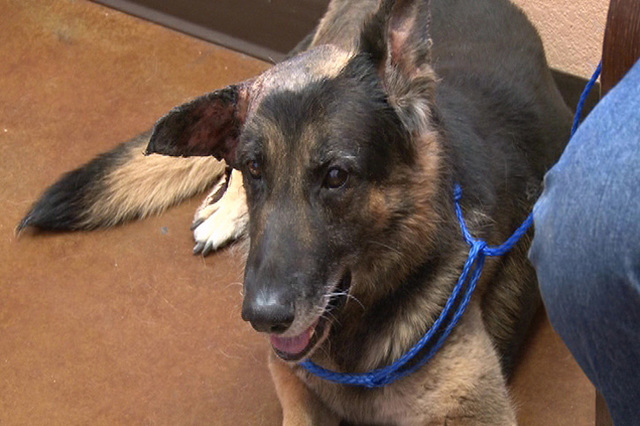 One of the two pit bulls who escaped their yard and attacked a retired police dog last week will likely be put down after the owner surrendered the dog to animal control following a second escape Wednesday.

A Nye County Animal Control supervisor said the Pahrump office received a call before noon that the dogs had left their yard and were again at large. An Animal Control officer subsequently responded to the area and collected the two pit bulls before meeting with their owner.

The owner then agreed to surrender what he called the “ringleader” of the two animals to the county.

“The owner of the two pit bulls has surrendered one of them. They say it is the ringleader of the two; the second one just tends to follow along,” Animal Control Supervisor Jon McCarty said. “So at this point we have one of the dogs surrendered and it will no doubt be euthanized due its nature.”

The second pit bull is reportedly back at home. As of Wednesday afternoon Animal Control said it was waiting to see if the owners of the 12-year-old retired narcotics K-9 named Hoss wanted to file a citizen’s citation against the pit bull’s owner over the incident.

Hoss suffered injuries to his right ear and the top of his head after the two pit bulls attacked him on March 23, knocking him out and dragging him through the desert near his home.

The incident occurred when Hoss’ family took him outside to use the restroom. Hoss walked over to a neighboring lot, while one of his owners watched, when the two pit bulls jumped the fence to their nearby property and ran toward the former police dog.

Hoss’ family ran for their dog and had to borrow a neighbor’s walker to beat the pit bulls off of him, while another neighbor sprayed them with a hose to stop the attack.

By the time Animal Control arrived on scene, the fight was over and all animals were back on their respective properties.

Hoss underwent two surgeries to correct the damage done by the pit bulls last week and was scheduled to undergo another on Monday.

His third surgery was moved to yesterday, however, after the condition of his injured ear reportedly became worse.

Hoss’ owner Dan Thomassian, a sergeant with the Nye County Sheriff’s Office, said it was likely the vet would need to remove Hoss’ entire right ear during the surgery.

Hoss was donated by his family to the sheriff’s office in 2006 to be trained for use as a narcotics dog. Hoss served with the NCSO for four years before retiring in 2010.

Thomassian said this whole ordeal has been hard on his family. Not only did they see their family pet attacked, but the vet bill for his surgeries is expected to cost more than $4,000.

If you would like to donate to Hoss’ treatment, a paypal account has been set up under the name Hoss.help4k9@yahoo.com. Those who want to donate locally can also go to the Homestead Animal Hospital, located at 2740 S. Homestead Road, to drop off a donation there as well.

In honor of all retired police dogs in need of medical attention, the Thomassian family said they plan to set up a nonprofit foundation to help families with retired K-9s pay for medical services in the future.

Any money donated to Hoss’ recovery fund that is unused will go into an account for the new nonprofit.