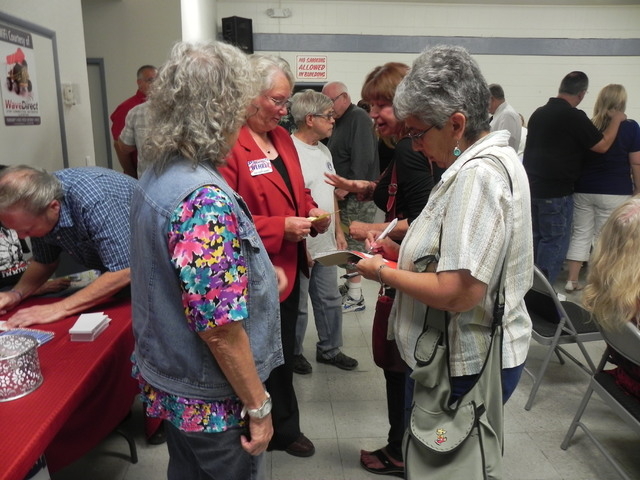 “One of my first changes is going to be appointing Rick Dugan as my assistant sheriff,” Marshall said to applause. He said Dugan has over 20 years of full-time law enforcement experience, he is the officer in charge of the DARE anti-drug program and GREAT anti-gang program for the kids, is a patrol sergeant and runs a construction company.

“The other thing we’re going to do is establish accountability and transparency throughout the sheriff’s office. We believe it begins at the top and trickles down to the bottom,” Marshall said.

Wehrly said, “I will immediately begin an internal audit of programs, position, policies, procedures and processes to determine where we are and ensure we’re moving toward agency standardization to ensure budget dollars are being used in a manner conducive to produce the most efficient results while continuing to meet our peacekeeping and service responsibilities. I will remain within the budget and explore alternate revenue streams.”

“I will change the culture of the Nye County Sheriff’s Office by treating the employees with respect and implement a fair, concise, unbiased set of policies and procedures which will be administered equally and without prejudice,” she said.

Marshall said he doesn’t need 100 days to implement changes as Wehrly suggests in her campaign.

On one question, Marshall countered the department hasn’t had a low retention rate for officers.

Wehrly said until she works for the sheriff’s office she won’t know the retention rate. But she added, “Usually when there is a retention rate problem the source is bullying, favoritism, people feeling that there’s unfair practices going on, or they’re looking for a better job and they find it so they move.”

Both candidates supported the creation of a citizens’ advisory review board and emphasized it shouldn’t just be a rubber stamp but a board that could make some recommendations with some teeth. But Wehrly added, “the citizens review board has to be triggered and right now we don’t have triggers in the document. The triggers have to be a citizens’ complaint, a deputy’s complaint, the sheriff’s complaint.

In answering another loaded question, Marshall said there was a perception officers use their position to intimidate other officers. He pledged if someone brought that complaint forward it would be investigated.

Wehrly said the citizens review board would conduct an independent investigation of any bullying. She also suggested having deputies wearing lapel cameras to record continuously during their shift, except in sensitive areas.

Marshall said he was absolutely in favor of lapel cameras.

Moderator Geraldine Ahrens noted Wehrly received the endorsement of 74 percent of the members of the Nye County Law Enforcement Association. Marshall said he didn’t seek their endorsement, he received an email from NCLEA inviting him to appear at a meet and greet at Petrack Park, but never received an answer back.

“I wasn’t invited to the park either,” Wehrly said, one of a series of her simple, short answers to Marshall’s longer-winded ones that drew an applause.

“This is a very large valley and we are understaffed as it is. In the last four years we have lost 26 positions, nine of them have been supervisors. If we have three officers on shift and they’re handling something on the south end of the valley, a home invasion or a shooting, or something occurs where you need an officer immediately we don’t want that officer driving to the station, checking out a vehicle, making sure it has enough gas in it and go to your house,” Marshall said.

Wehrly was asked what to do if a federal agency like the U.S. Bureau of Land Management came into Nye County to seize someone’s cattle, like at the Bundy Ranch in Clark County.

“I don’t believe they are a federal police agency. Let’s just say the federal folks will be stopped in their tracks, we will protect our citizens.