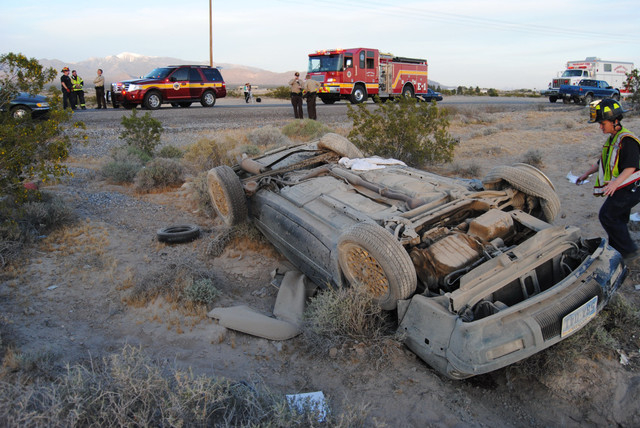 Five people were transported by air to UMC Trauma following a single-vehicle rollover crash, which ejected all occupants of the vehicle, along Highway 160 between Irene Street and Mesquite Road last Thursday just after 6 p.m.

Pahrump Valley Fire and Rescue Services Chief Scott Lewis was the first to arrive on scene.

“Upon arrival, I found a one-vehicle rollover with the vehicle resting on the desert floor, upside down on the west side of the roadway,” he said. “I found that we had at least five patients, all of them appeared to have been ejected judging from their appearance and condition, including one person, a teenager who was trapped on the underside of the overturned vehicle.”

The Nevada Highway Patrol has yet to release information on the crash despite numerous requests from the Pahrump Valley Times.

Law enforcement provided traffic management on Highway 160, blocking off the highway for the incoming airships that were added to the assignment,” Lewis said. “All of the patients were down on the ground and we initiated our triage system. We identified the two patients that would be going directly to flight in short fashion. We also determined which ones were going directly to Desert View Hospital via ground.”

Lewis noted that all five patients, two adults and three teenagers, were eventually flown to UMC.

“All of the injuries were potentially life-threatening. NHP is investigating the accident as well as investigating certain aspects of it to determine whether speed was a factor.”

Fire crews used pressurized air bags and a technique known as ‘cribbing,’ to extricate the occupant underneath the vehicle.

“Cribbing is basically blocks of wood in various shapes,” he said. “The high-pressure air bags were utilized to start lifting the vehicle and the cribbing was put in place so the vehicle would not come back down on the patient. The vehicle was lifted to a point where the patient could be safely extricated from the underside of the vehicle. The air bags and cribbing also gave us the ability to observe the overturned vehicle underneath, to make sure that there were no additional patients on the other side.”

Lewis described the scene as “dynamic” as there were many people who stopped wanting to help.

“The highway was closed down early after our arrival and vehicles in the actual area were turned around,” he said. “The highway remained closed in both directions for several hours pending the investigation by NHP.”

Fire crews throughout the weekend were inundated with calls for service due to the high winds.

He noted the department handled a large amount of respiratory emergencies due to the gusts upward of 40 mph.

“This should serve as a reminder to residents who may suffer from respiratory issues to keep their windows closed and use airway management protection, like putting something over your nose if you’re outside in the high winds, especially if you are prone to conditions such as asthma and other type of respiratory ailments that people are known to have. It’s best to take necessary precautions to avoid any of those types of issues.”