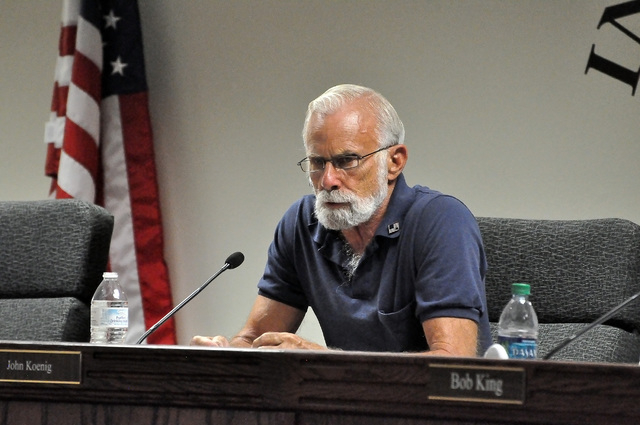 Pahrump Regional Planning Commission Chairman John Koenig will resign from his position on June 30 to focus on his campaign for the county commission seat.

Koenig made an announcement following his decisive win in the Republican primary election on June 14.

“I had originally planned on resigning during the July meeting but have changed my mind to what I consider a cleaner break,” Koenig said in an email statement on Monday.

“I do not want anyone to get the idea that a vote I cast on the RPC was in any way intended to garner a vote during the election,” he said.

The soon-to-be-vacant chair will be available to anyone on the commission, Koenig said.

Throughout his primary election campaign, Koenig touted his experience on various boards and in the community. Koenig had been a member of the RPC for six years and chairman for 3 ½ years. He is also a member of the Nye County Regional Transportation Commission.

A Long Island, New York native, Koenig has been a Pahrump resident for 12 years. He attended the University of Bridgeport and the Bridgeport Engineering Institute in Connecticut.

When asked if there was anything that he didn’t have time to finish while on board, Koenig said: “I wish I had better luck with limiting lot sizes as related to controlled growth, this will also be the hardest thing for the board to do over the next few years.”