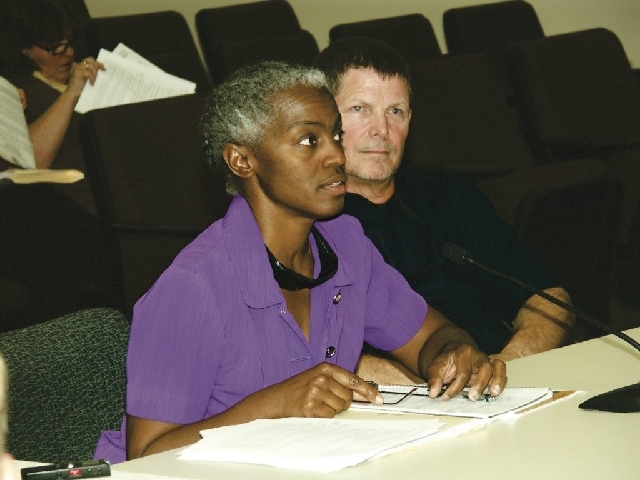 The Pahrump Regional Planning Commission (RPC) revisited several agenda items last week that were tabled earlier this month after a communications error prevented the body from taking any action.

One item on the agenda was eventually tabled again by the commission to allow the parties more time to reorganize their request.

The proposed business is described as a 44,250 gallon artificial body of water using roughly 1,960 square feet for a three foot-deep pond located at 231 S. Frontage Rd.

According the agenda’s backup materials, the undeveloped property was rezoned from Open Use (OU) to General Commercial (GC) and subsequently approved by the Board of County Commissioners at their June 22, 2007 meeting.

Dickson told the RPC that the proposed attraction would be a great benefit to the community.

“This attraction is fun for all ages and abilities. It’s an ‘inner tube with an attitude.’ We will have a five-boat capacity and this lot will support seven parking spaces; two handicapped and five regular. The impact on the adjacent properties is only positive. Our customers will work up an appetite or thirst and visit the nearby businesses and replenish themselves. Parents will visit the business nearby while their children bump. We will receive power from Valley Electric and water from Utilities Inc. We strive to be a good neighbor and endeavor to maintain a good relationship with all of our neighbors,” she said.

RPC Chairman John Koenig said there were several issues that needed to be resolved if the commission were to grant the conditional use permit.

“Number one, you are going to need a bathroom, which means you are going to have to run water and sewer. UICN will allow you to fill it initially from their hydrant but after that you have to connect,” he advised.

The RPC’s staff report stated that the conditional use designation did not appear to be appropriate in the immediate vicinity at the site which is directly across Highway 160 where several large retail outlets are located.

“The subject property is an undeveloped vacant lot with a chain-link fence, with no paved or hard-surfaced areas for the parking of vehicles, and no landscaping exists. The applicant is not proposing to install a paved parking area or landscaping, or other improvements except for the pond and deck. The proposed parking area is an unpaved dirt portion at the front of the property,” the report stated.

RPC Vice Chairman Gregory T. Hafen II said he thought the location would not be suitable for such an attraction due to the gravel lot at the site.

“One of the big conditions is the on-site parking area shown on the site shall be improved to Nye County standards to consist of all-weather surfacing with a minimum of two-inch compacted asphalt concrete. I just want to make sure that you fully understand all of the conditions because that is a cost burden,” he said.

The report also cited that the use of such a facility may pose problems to existing or future neighboring uses.

“The proposed use would be adjacent to an existing restaurant. The use may be hazardous or disturbing based on the lack of an adequate on-site paved parking and vehicle circulation area. Customers would back out into the Frontage Road right-of-way. There does not appear to be a sufficient vehicle maneuvering and circulation area either existing or proposed,” the report read.

Hafen, meanwhile, asked Dickson about security fencing at the proposed site to keep curious kids and adults away from the attraction after hours.

Dickson said there was an established fence separating the attraction from the public.

“The entire lot is fenced. We were not intending to double fence it but we were planning on gating or raising the top of the ramp. If you do happen to jump the fence, you still have to work pretty hard at getting in,” she assured the commission.

Following further discussion RPC members voted unanimously to table the item while Dickson amended her CU request to include recommendations from the board.

Commission members also discussed whether to reinstate a grandfathered use designation for the reopening of the Country Express Convenience Store and Deli along North Highway 160.

According to the RPC’s agenda material, the owners, Heather and Erika Tomkowiak, say the property was brought up to code after a complete renovation. The location had served as a neighborhood store for more than 20 years until a 2011 fire caused serious damage to the structure’s second floor.

The report stated that the store sustained both smoke and subsequent water damage but the structural integrity of the building, walls and floor were not compromised.

Tomkowiak told the commission that if approved the business will function as it always has before the fire.

“It will be a country store and deli operating on the north end of town. Initially we will open for breakfast and continue to serve lunch and dinner. Eventually we would like to be 24 hours but initially we will be open from six a.m. to about seven or eight p.m.,” Tomkowiak advised the board.

An application for an animal sanctuary was also recommended and approved by RPC staff.

Fratt said that he will have nine dogs, which he described as a small “toy-size” breed, and more than 10 of the Sphynx “hairless” cats.

The staff report stated that the property consists of a single parcel, roughly one acre in size located at 920 W. Basin Ave.

“It is bordered to the south by Basin Avenue, a paved county-maintained right-of-way. The site is rectilinear, relatively flat, laid out in a north-to-south orientation and contains no unusual land features. Upon extensive review of the application, Staff finds sufficient justification to recommend approval. It appears that the requested Conditional Use Permit will not be hazardous or disturbing to existing or future neighboring uses; additionally, the use does not appear to be detrimental to any persons, property, or the general welfare by reason of excessive production of traffic, noise, smoke, fumes, glares or odors,” the report read.

The animal owners sought the CU permit to adhere to new county ordinances limiting the number of animals housed at a residence.