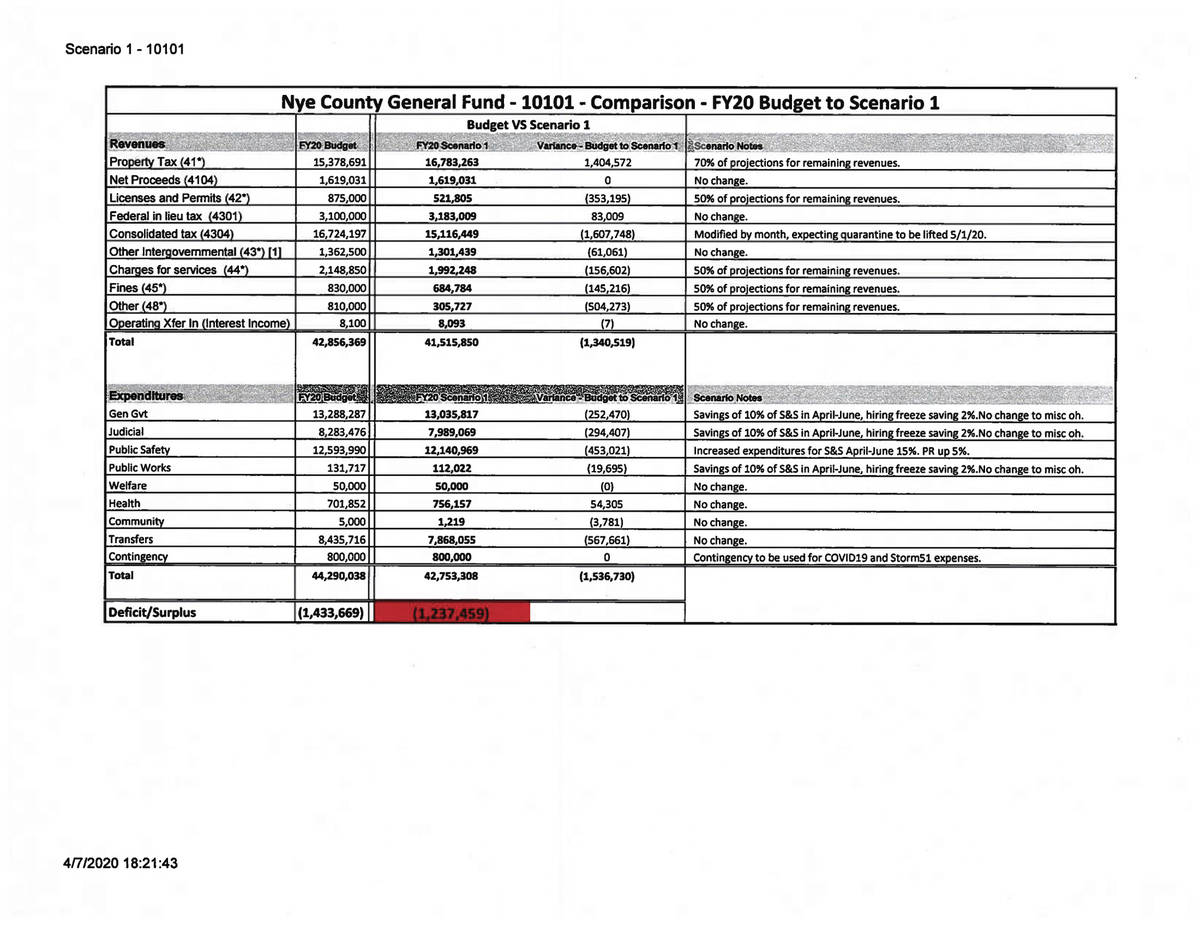 Special to the Pahrump Valley Times Included in the backup information for the Nye County Commission's April 14 agenda, this table details the budget deficit the county is eyeing due to the COVID-19 pandemic. 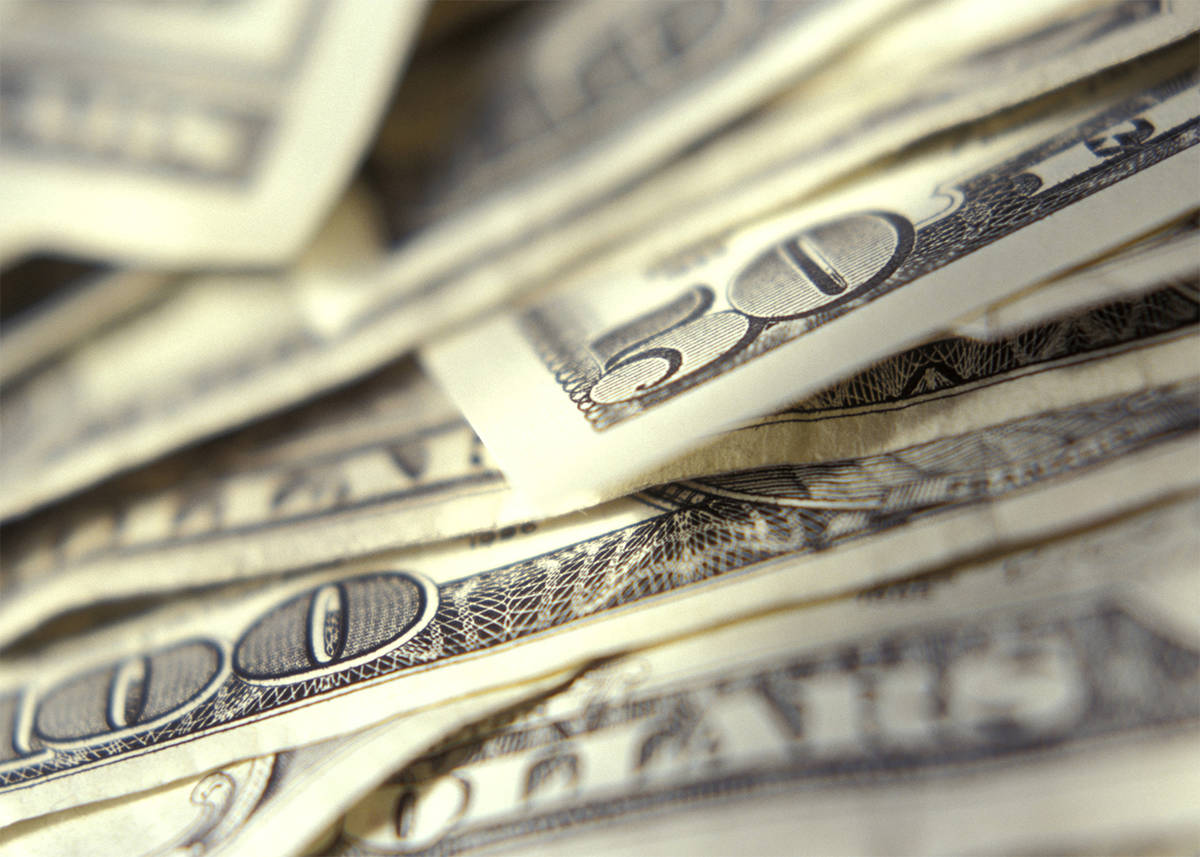 Nye County's financial situation may not be ideal but officials are taking action to try to reduce its budget shortfall.

With the COVID-19 crisis causing a steep dip in the economy, Nye County is striving to project exactly what impact the pandemic will have on its financial situation in the coming months and into the next fiscal year.

Initial reports from Nye County Comptroller Savannah Rucker showed a possible $1.9 million shortfall in revenue versus expenditures for the current fiscal year, which ends June 30 but actions being immediately taken have already managed to shave several thousand dollars off of that projected deficit, which now sits at $1.2 million.

Primed with a presentation outlining the 2019-2020 budget as approved versus a scenario based on the COVID-19 outbreak, Rucker gave the Nye County Commission another update at its April 14 meeting.

She started off by noting that several areas of the budget are not anticipated to see any changes. One big factor in the budget is property taxes and the revenue from this source is forecast to be strong when closing out the current fiscal year.

“Property taxes are still in excess of what we’ve budgeted and the reason for that is, we see so few property tax payments in the end of the fiscal year,” Rucker explained. “Which is a good thing for the county.”

Rucker said the county is also not anticipating any changes in net proceeds, remarking, “Gold is going crazy because people are investing in gold more heavily than other commodities and the stock market, because of the fluctuation. So we are hopeful that the net proceeds revenue will come in as anticipated, potentially even a little higher.”

Payment in Lieu of Taxes, or PILT, revenue is not expected to see a shortfall either. As a matter of fact, the county received $83,000 more in PILT than anticipated as a result of a class action lawsuit against the federal government that proved PILT calculations had been done incorrectly.

Other aspects of the county’s budget, however, will see some fairly sizable impacts due to COVID-19.

“Consolidated tax, this is where we see the largest hit,” Rucker informed. “We’re modifying consolidated tax sections month by month and this is with the expectation that the quarantine will be lifted on May 1. But based on recent news, I don’t know that that is going to be the case, so that number may grow even larger if the quarantine is extended through the end of May.”

With the new projects, Rucker said the county was looking at a shortfall of $1.3 million in the amount of revenue that had originally been expected in fiscal year 2019-2020.

Moving on to the expenditures side of the budget, Rucker explained that she had gone through the various expenses to see where costs could be reduced to help offset the lack of revenue. She had identified a 10 percent savings on services and supplies and a hiring-freeze savings of 2 percent for general government, judicial and public works functions, in conjunction with the use of $800,000 in contingency funds.

Calculated with those savings, the total deficit in revenue versus expenditures is roughly $1.2 million. Once again, Rucker stressed that all of those figures were projected based on the idea that Nevada’s quarantine orders will be lifted on May 1.

“Again, completely preliminary but we are watching this very closely,” Rucker stated.

She also touched on a call she and other county finance officials across the state had with the Nevada Association of Counties, discussion that included information from an analysis of the Nevada economy by sector that delved into how consolidated tax might be effected for fiscal year 2020-2021.

“In looking and reviewing those analyses, it’s actually more favorable than our approach for fiscal year 2020-2021. Which gives me confidence that budgeting conservatively and cutting where we can is going to put us in a good spot fiscally… I thought that was good news, it gives me some confidence that we are on the right track,” Rucker stated.