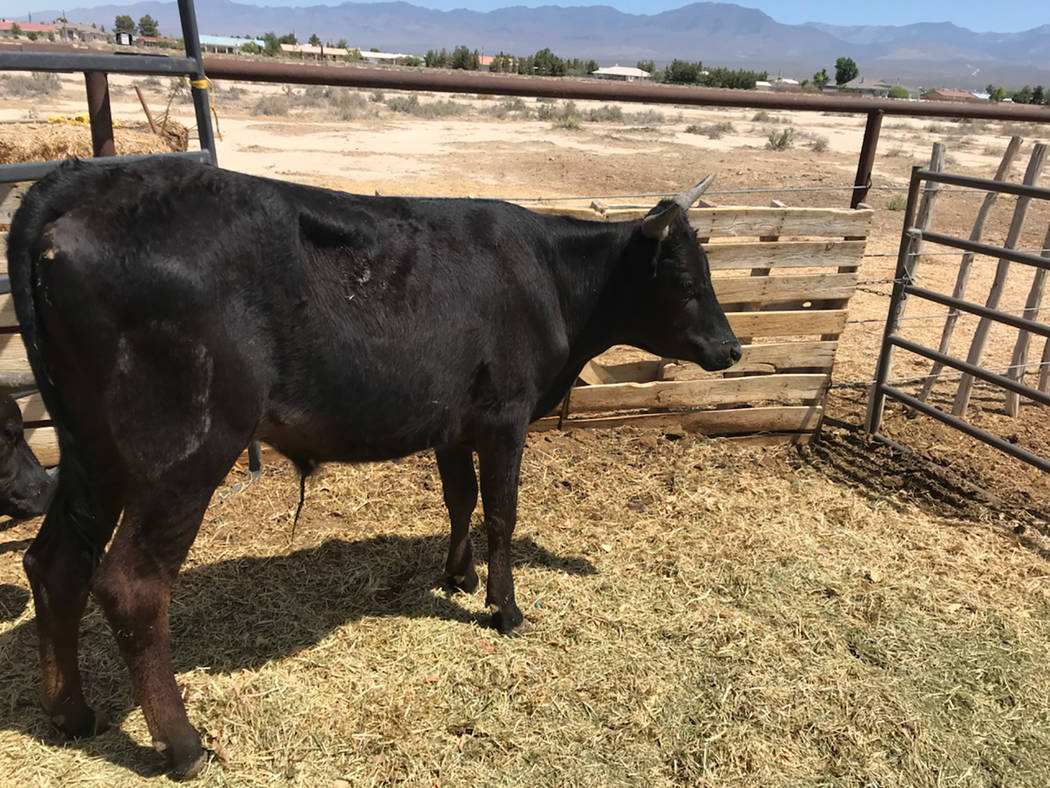 Special to the Pahrump Valley Times This young steer led local law enforcement and animal control officers on a pursuit May 10 after the animal escaped its enclosure along East Calvary Street. The hour-long chase came to an end when the 400-pound animal was located and eventually led back to its home, safe and sound.

There were several hilarious and a few tense moments after a bull somehow escaped its enclosure and began wandering around area neighborhoods .

As a result, Nye County Sheriff’s deputies and animal control officers were summoned to the area of the old Mount Charleston Elementary School, and tried for roughly an hour to wrangle the animal, which had its own intentions in mind on May 10.

For the better part of an hour, the animal meandered through several properties and roadways with authorities in tow.

Conversations between deputies and Nye County dispatchers indicated that the black bull, displaying large horns, somehow liberated himself from a property along East Cavalry Street.

Deputies were also forced to shut down a few area intersections during the incident to prevent motorists from running into the animal, which was briefly spotted near Lakeview Executive Golf Course, along the 1400 block of East Mount Charleston Drive.

Volunteers from Nye County Search and Rescue were also notified that their services may be needed.

The bull’s owner, who goes by the first name of Cole, said he recently acquired the animal, one of which he raises on his property for the purpose of practicing the sport of team roping.

He noted that it was another small animal on the property that bears responsibility for the bull’s escape.

After authorities were contacted, both Cole and his neighbor took to horseback and also began tracking the animal.

“Most of the time was spent just trying to locate him because he went out somewhere and laid down in the shade near the golf course just to cool off,” he said. “We had several sightings from people, so it could have been pretty easy to catch him, but he got spooked by something and that’s where it went from being easy, to not so easy, but it all ended well.”

Sheriff’s deputies and animal control officers were trailing the bull for a little more than an hour, as the animal roamed along roadways, residential properties and even parts of Lakeview Golf Course.

At one point, even Nye County Sheriff Sharon Wehrly joined in the chase, noting that the bull appeared to be headed northbound on Falcon Street at 4:43 p.m.

A few minutes later, a motorcycle deputy said the bull decided to “take a little break” at a property on Newberry Avenue.

Afterward, the deputy said it appeared that the bull got up and was just trying to make its way back home.

The animal was eventually located just east of Pahrump Valley Boulevard on Laguna Street, where he was slowly led back to the East Cavalry property, safe and sound just before 5 p.m.

Although the sizable creature can be physically intimidating to some people, Cole said he does not consider him a dangerous animal at all.

“He’s just over a year old and weighs about 400 pounds, so he’s basically a big calf,” he said. “I think if someone encountered him, it could be intimidating, but all in all, he’s a pretty docile creature. Any fear would basically be psychological.”

Though law enforcement officials referred to the animal as a “bull,” Cole said that’s not exactly the correct term.

“He’s actually a steer,” he said. “The difference between a bull and a steer is that a steer has been castrated or neutered, while a bull has not been. A bull is a very considerable animal, but this little guy is just like a large calf with horns. I’m glad nobody got hurt, and we finally got him back here where he was eating again with his friends. I also want to give a big shout-out and thanks to all the Nye County personnel who helped out. They were just great.”