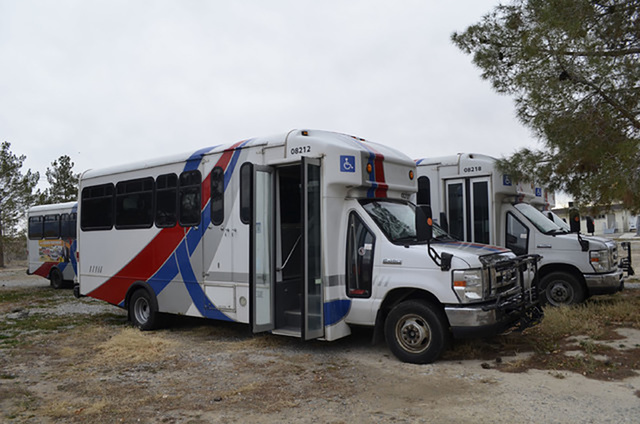 The launch of Pahrump Rural Transit, the town’s first on-demand transportation program, is delayed after it failed to meet requirements for a competitive Nevada Department of Transportation grant. Four buses for the program were shipped earlier this year. Special to the Pahrump Valley Times

The launch of Pahrump Rural Transit, the town’s first on-demand transportation program, is delayed after it failed to meet requirements for a competitive Nevada Department of Transportation grant.

The program applied for the grant in June but didn’t meet the requirements that were set forth by the Federal Transit Authority, said Adrienne Packer, an NDOT public information officer.

The transit group must show the money in place to match federal grants, according to the requirements. Pahrump Rural Transit produced support letters but had no evidence that the money was in place, Packer said. The program also wasn’t able to provide letters indicating support for funding from local merchants or other agencies.

Additionally, Packer said the financial commitment letters that the program had submitted didn’t reflect the amount needed to qualify for the match.

“They indicated they had a third-party contractor but did not follow federal guidelines in procuring that contractor,” she said. “They were also unfamiliar with essential federal policies such as equal employment opportunity rights, drug and alcohol guidelines and how passengers should be treated when being transported.”

NDOT plans to send a representative to Pahrump to help with the application.

“We recognize that a transit service is important to Pahrump as a community in need of transit options, and our staff worked with the Pahrump Rural Transit group up until the deadline but unfortunately to no avail, ” Packer said. “We plan to send representatives from our transit grant division to Pahrump in the very near future to help with the application process.”

NDOT received 21 grant application funds, 20 of which it expects to fund this year.

“We received $6.1 million for grants this year and had $9.8 million in total requests,” Packer said.

Albert Bass, the organizer for Pahrump Rural Transit, will reapply for the grant next year.

“Now if that goes well we would be looking at the end of 2017 or early 2018 before the bus program could start,” Bass said.

The town of Pahrump agreed to sponsor and administer the grants for Pahrump Rural Transit, but the program still lacks an owner. Nye County officials have been reluctant to accept responsibility for the program.

Officials delivered four buses to Pahrump from Salt Lake City earlier this year thanks to donations from the community. One of the buses is currently operating VETrans, a free veterans’ transportation program under NyE Communities Coalition.

The transportation program is designed to take veterans to their local medical appointments and for pharmaceutical pickups.

The deadline for the latest grant application cycle is April 15, but NDOT officials are looking to change it, Packer said.

“As far as new requirements, those are set by the federal government and change periodically,” she said.