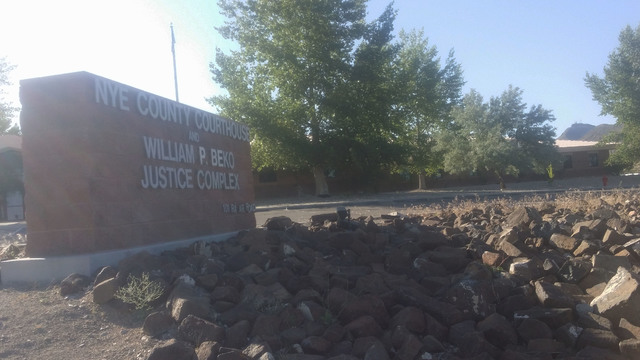 David Jacobs/Pahrump Valley Times A photo of the Nye County courthouse and justice center as shown in a 2016 photo.

The Tonopah Justice Court is in the process of addressing some of the numerous security risks that currently exist at the facility.

The Nye County Commission approved the acceptance of a $27,000 Trial Court Improvement Grant for the court during its Tuesday, Jan. 2 meeting with the funding geared toward creating a safer environment at the courthouse. However, the grant will only go so far in helping remedy the reported issues. Other areas of concern can only be addressed if additional funding can be found.

The agenda item included extensive backup detailing the situation and the need for the grant funding. In a document outlining the problem, Tonopah Justice Court Administrator Patti Galvin stated, “There are four entrances to this facility, none of which are monitored or have security screening in place. This leaves the courts and other offices very susceptible to attack and/or threat.”

Galvin went on to report that the closure of the Tonopah jail in 2015 had a negative impact on security at the courthouse as a result of understaffing, which was required due to budget constraints at the county level.

Despite the fact that the court has since been assigned a part-time bailiff, the myriad of security risks still exist. She noted that video surveillance would play an integral role in increasing the overall safety of the facility.

“The need for courthouse/courtroom security has become more urgent with the rise of violence taking place in courts,” Galvin wrote. “The number of threats and violent incidents targeting the judiciary has increased dramatically in recent years. For these reasons, security for the judicial officers, employees and the public must be a top priority.”

A security assessment performed by Nye County Sheriff’s Sergeant Chris Puckett, and submitted in July of 2017, noted 11 separate suggestions for improving the security measures at the courthouse.

Included were recommendations such as installation of walk-through metal detectors, security railing to separate court personnel from those doing business at the facility, a smaller working window for the court administrative office, bullet-proof glass for the front counter, and security cameras throughout the building.

“These suggestions would not cover all problems that would arise in the courtroom but they would help alleviate several of them,” Puckett stated in the report. “Problems in courts have been on the rise in the last few years because of lack of security. Any improvements made will help to make more confident and productive employees.”

The Trial Court Improvement Grant will only cover one of Puckett’s suggestions, however, that of security cameras. The grant funding will be used to purchase a system consisting of 13 two-and three-megapixel cameras and a network video recorder that will allow the court to store approximately 30 days worth of recorded data.

“The funds requested in this grant application will be used to purchase an IP-based security camera system for Tonopah Justice Court, which will provide video/audio coverage for the courtroom, front office, lobby area, outer hallways and parking lot. This will allow court staff and the judge to observe or record what takes place at the entrances of and inside the courthouse and courtroom,” information provided in the agenda backup detailed.

While the county is not required to furnish a match for the grant funding, the Tonopah Justice Court itself will be paying a match of just under $11,900 or approximately 30 percent.

The total cost of the security camera project was reported at $39,599. Desert Hills Electric Inc., based in Sparks and operational since 1978, has been selected by the Tonopah Justice Court as the contract of choice. The estimated completion date of the project is 60 to 90 days following receipt of the grant funding.

“Judge (Jennifer) Klapper extends her thanks to the Nevada Administrative Office of the Courts for their part in bringing courtroom/courthouse security to Tonopah,” Galvin stated when reached for comment. “This improvement is long overdue and we look forward to providing a safer environment for the public and employees of northern Nye County.”