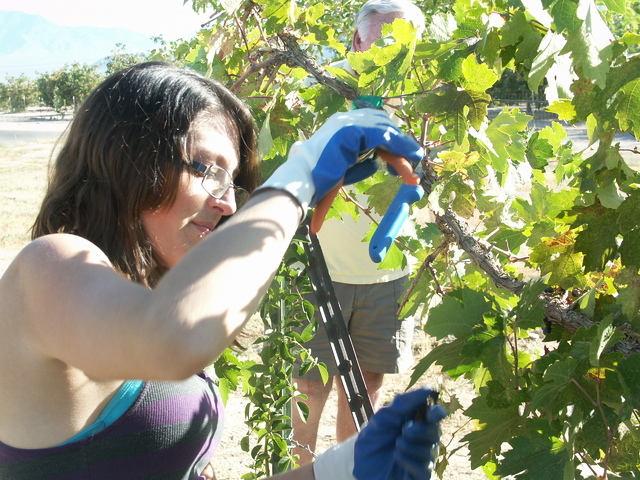 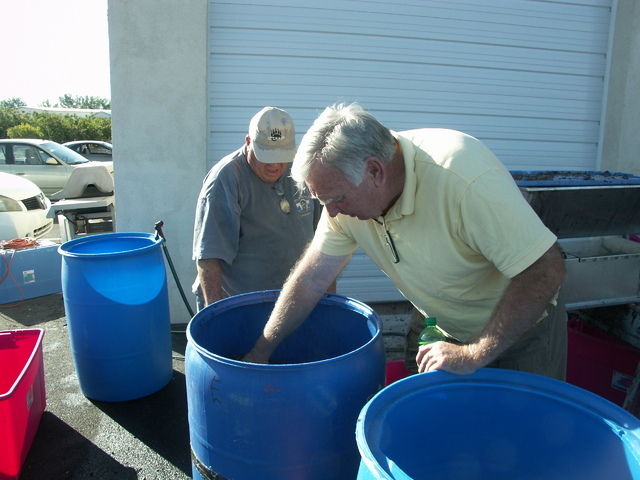 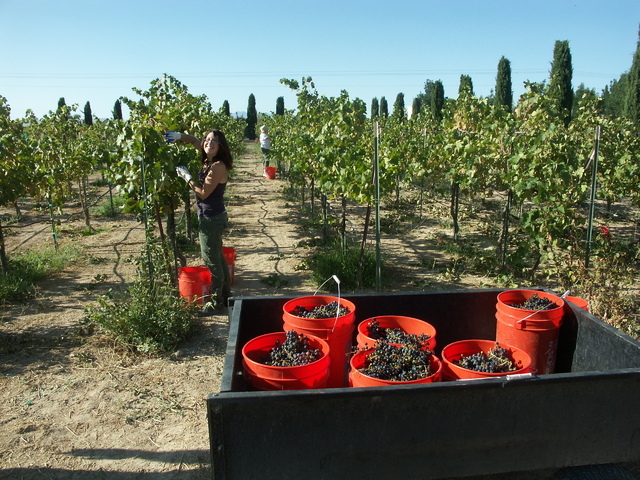 Anyone driving along East Kellogg this week may have spotted unusual activity among the vineyards at Sanders Family Winery.

Roughly a dozen individuals rose with the sun to participate in an ancient annual ritual known as “The Harvest.”

One of those individuals who braved the early morning heat and buzzing insects was owner Jack Sanders.

Clad in his signature yellow polo shirt and khaki shorts, Sanders didn’t seem to mind that speckles of grape juice found its way onto his clothing as he sheared a another cluster of grapes from the vines for a future bottle from the Sanders preserve.

“We are in the Zinfandel vineyards, which is the one closest to the pistachio farm. We are about 60 to 75 percent through this vineyard. We finished up the Petite Sirah yesterday, but whether we’re going to finish this morning remains to be seen because we like to stop around 9 a.m. due to the heat,” he said.

The harvest began on Wednesday was completed Friday.

Sanders said the annual harvesting event began back in 2006.

One volunteer moved to Pahrump just recently by way of Searchlight.

“I actually really like it. I enjoy farming and I’m going to be bummed out when we have to quit. I’ll be here for all of the harvest days. I also get to work close to my husband wherever he’s at right now,” she said while snipping another bunch of grapes from the vine.

Gathering volunteers for the harvest was not difficult for Sanders, as he uses social media to get the word out.

“The Internet is such a great tool,” he said.

The grapes harvested this week, Sanders noted, will not grace the inside of a wine bottle for several years.

“It all depends on the wine,” Sanders said. “For example, our ruby port takes seven years and we make that from our Petite Sirah grapes. Our sherry(s) take about five years. The regular Zinfandels and Petit Sirahs, which are heavy and bold red wines, will take up to two and a half to three years before they’re ready for market. The grapes we are crushing right now, the earliest will be 2016 or 2017,” he said.

Sanders founded the first modern winery in Pahrump in 1988.

The first vineyard was located at the Valencia Road Property, now known as Winery Road.

Sanders said his present vineyard continues the tradition, along with several upgrades to the site including the construction of a Renaissance Tuscan-style winery, visitors center and performing arts amphitheater.