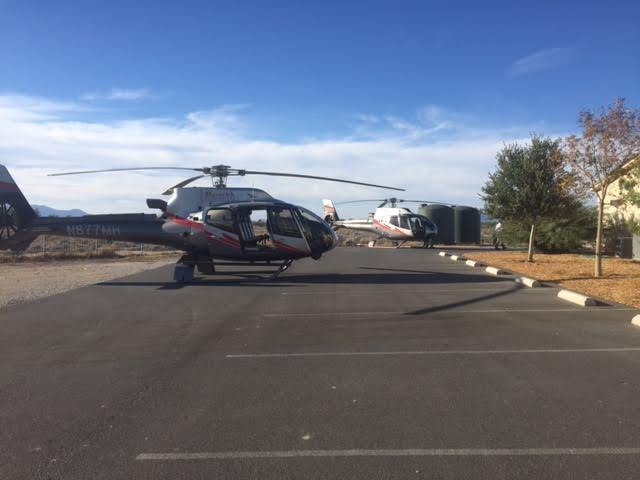 Sanders Winery is in the process of developing a deal with Maverick Helicopters out of Las Vegas to fly in tourists, making the trip to Pahrump more convenient for potential visitors. Special to the Pahrump Valley Times

Being over 70 miles away from Las Vegas, travel could deter some tourists from making the trek over the hump to town to visit the variety of attractions.

Sanders Family Winery is in the process of developing a deal with Maverick Helicopters out of Las Vegas to fly in tourists, making the trip to Pahrump more convenient.

Instead of having to make an over one-hour drive, those who opt for the helicopter service can arrive from Sin City in about 20 minutes.

Sanders said they carried out a test run three weeks ago alongside a large casino property in Las Vegas, which brought in three helicopters in all, carrying a total of 21 people.

“We did it in conjunction with the MGM Grand Hotel on a day trip,” Sanders said. “Looks like we’re going to be able to do some things like that in the future. The test run went really well.

“We did a wine tasting for about an hour and 15 minutes and after that, they took off.”

The deal came about after an MGM Grand executive made a trip to the winery after previously being unaware of its existence.

“We chatted a little bit and later I got phone call from their marketing department saying we’d be willing to do a test run and I said absolutely,” he said.

Those who made the trip were impressed with the winery and hope to make it a regular offering in the future.

“I think they loved it,” he said. “The MGM Grand people said that they were going to start pushing it more, so I think that it’ll happen.” Aside from cutting the time out of travel, the experience of flying in is what Sanders thinks will draw people to the service.

“It’s kinda nice because it is an attraction,” he said. “It gives us another way to attract visitors to town for tourism.”

Arlette Ledbetter, director of tourism for the town, explained the feature will be a solid addition to the tourism industry in town.

“Once it’s all set and done, it’ll be a great addition to our community,” Ledbetter said.

Sanders said that by the time 2017 rolls around that a deal could be in place to make the helicopter ride a regular offering.

“I think it could happen pretty fast,” he said. “Once they get the word and get it marketed, I think it will work out well. I think we’ll probably hear something before the end of the year or early next year.”