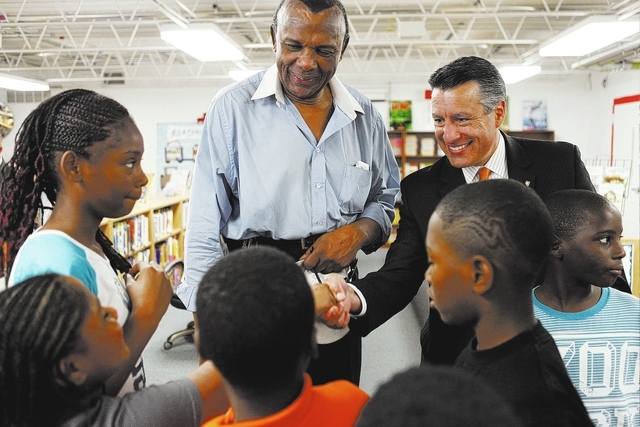 CARSON CITY — Gov. Brian Sandoval announced Tuesday he will not run for the U.S. Senate in 2016, saying he wanted to give “undivided attention” to an economically recovering Nevada rather than seek new office in Washington.

Sandoval’s decision was widely expected but still noteworthy in the jockeying to fill the Senate seat being vacated by the retiring Sen. Harry Reid.

It deprives Republicans of their top choice and their most formidable candidate as they try to grab a Senate seat away from Democrats. But Sandoval, who won re-election as governor in a landslide last year, had sent signals in recent months he might not be interested in a new job, and his announcement in a statement early Tuesday only made it official.

“In 1984, Nevada Senator Paul Laxalt gave me the opportunity of a lifetime to serve as a legislative intern in his office in Washington, D.C.,” Sandoval said in a statement. “Coming from humble beginnings, the experience changed my life and charted me on a path of public service. It never occurred to me then that I would someday have an opportunity to be a candidate for the United States Senate.

“I have said many times that it is an honor and a privilege to serve as Nevada’s chief executive and that I love my job. My heart is in my responsibilities as governor and continuing to build the New Nevada. My undivided attention must be devoted to being the best governor, husband and father I can be.

“For these reasons, I will not seek the United States Senate seat that will be available in 2016,” Sandoval said.

Attention immediately turned to Republican Rep. Joe Heck, who has been courted by party leaders assuming Sandoval would take a pass. At first uninterested, Heck more recently is said to be leaning in favor of a Senate campaign.

“We’ve given this a lot of thought, now that the governor has announced he is not running we will give it additional consideration,” Heck said. “I appreciate the outpouring of support and encouragement — we’ll make an announcement very soon.”

Lt. Gov. Mark Hutchison said Tuesday he won’t be a candidate for the Senate seat either and he promised to support whoever wins the GOP nod.

National Republican officials and U.S. Sen. Dean Heller had called on Sandoval to seek the seat that will have been held by Reid for the past 30 years. Reid is backing former Attorney General Catherine Cortez Masto as the Democratic nominee for the seat.

Heller said in a statement that he supports Sandoval’s decision.

“Under his leadership, our state’s economy continues to experience the Nevada comeback that we all know it is capable of achieving,” he said. “While Governor Sandoval’s voice and experience would have been a welcomed addition here on Capitol Hill, I join the entire Nevada family in wishing him success for the duration of his term in office.”

In Washington, a Democratic spokesman said Sandoval passing up the race increases the chances the Nevada seat will remain in his party’s hands.

“We’re thrilled that we have a fantastic candidate in Catherine Cortez Masto running in Nevada and the GOP’s failure to land their top choice further complicates their ability to win a single Democratic seat this cycle,” said Justin Barasky, communications director for the Democratic Senatorial Campaign Committee.

Republicans have viewed Nevada as an opportunity to pick up a seat in an election cycle where they otherwise are playing defense. Republicans hold 24 out of the 34 seats being put before voters in 2016.

In an interview the day after the legislative session ended, Sandoval reiterated his previous comment to his current position, saying being governor was the greatest job he could hope for. Sandoval was re-elected to a second four-year term as governor in a landslide in November. He will be termed out by 2018.

“I’m proud of what’s been accomplished and what we’ve done,” he said.

Sandoval has been mentioned as a possible vice presidential candidate for former Florida Gov. Jeb Bush. Bush said in a recent trip to Reno that it is much too soon to talk about potential running mates.

With Reid’s surprise announcement in March not to seek another term, the open seat has drawn a lot of attention from Democrats and Republicans. Rep. Dina Titus, D-Nev., recently announced she would not run for the seat but instead seek re-election.