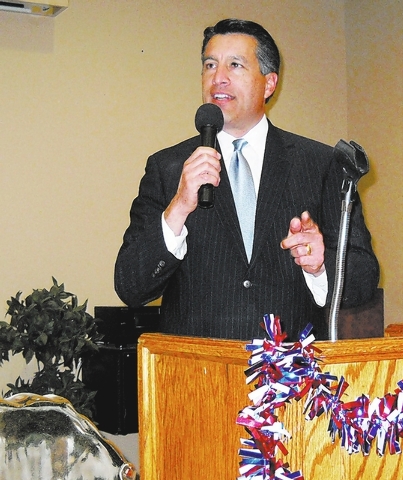 Nevada Gov. Brian Sandoval will be the guest of honor at a fundraiser for the Nye County Republican Party at the Pahrump Valley Winery tonight.

All 97 of the $200 per plate tickets for the dinner at the Wine Ridge RV Resort clubhouse are sold out.

Doors open at 4 p.m. Winery owners Bill and Gretchen Loken are providing an open bar for the event with complimentary wines, beer, ice tea and coffee. Lynn Peterson and The Phatt Katz will entertain.

“It’s a fundraiser for the Nye County Republican Party. The governor is helping the county party raise money in preparation for the upcoming election,” Jeremy Hughe, Sandoval’s campaign manager said.

He said the event is closed to the press.

“We typically do not open fundraising events to the press,” Hughes said.

Those attending the Nye County Republican Party 2013 Gala Evening will dine on a fresh garden salad with Symphony wine vinagrette, fresh vegetables, au gratin potatoes, a choice of a four-ounce filet mignon and four-ounce grilled salmon or Crepes Cannelloni with alfredo sauce and a homemade rum cake for dessert.

The Pahrump Valley Winery won a Nevada Treasures Award as the most popular tourist attraction in the Nevada Silver Trails Territory, one of six territories in the state, in voting as part of a contest by the Nevada Commission on Tourism last summer. The award provides recognition for the winery, which opened in 1990, in state and national promotions as well as recognition in the Nevada Commission on Tourism’s magazine Travel Nevada.