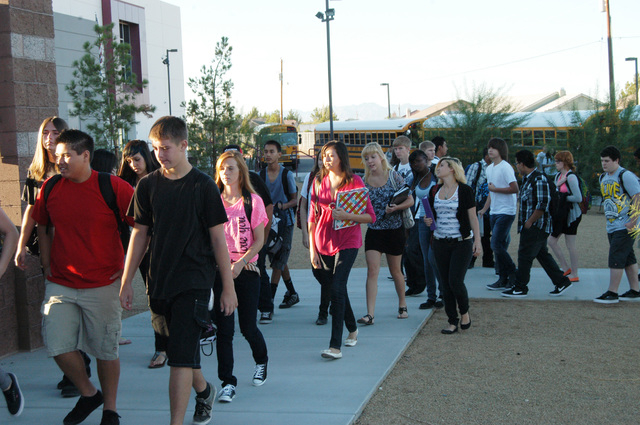 Discipline incidents among Nye County School District (NCSD) students are higher in the southern portion of the county than in the north according to recently released information from the 2012-13 school year.

The nature of the incidents were broken down into six categories ranging from illicit drugs and alcohol-related offenses, to weapon possession and acts of violence both with and without physical injury.

A total of 352 discipline incidents were reported district-wide.

The valley’s only middle school reported a total of 143 incidents.

NCSD Assistant Superintendent Dr. Kim Friel said in the aftermath of the Sparks Middle School shootings this month, only three instances of students possessing weapons were reported for the 2012-13 school year.

Two of the incidents occurred at RCMS while the third happened at Floyd Elementary.

Friel also said that instances of physical violence have gone down considerably this year.

“Those three incidents involved knives on our campuses. The physical incidents involved fights where somebody got a bloody nose and had to be treated by the school nurse or taken to the doctor’s office. The violent incidents without injury have also gone down. All of the district’s middle schools had the most instances and those have gone down about 50 percent compared to last year,” she said.

On the issue of drug possession among southern Nye County elementary school students, both Floyd and Manse had one instance each but not surprisingly the number rises as students make their way to higher grade levels.

Those numbers have also dropped when compared to last year.

Friel struck a realistic tone when describing the behavior among high school students across the Silver State.

“There is not a high school in the state of Nevada that doesn’t have some kind of drug use going on. The 31 instances at our high school is actually lower than what we have seen in the past. We are doing a much better job of finding the offenders and calling the police on that kind of activity and getting it out of the schools as quickly as possible,” she said.

Friel said she attributes the decline to hard work on the part of faculty members.

“All of the school teachers throughout the district have really worked hard to stop all of these offenses. They offer intervention when they see students having problems. They immediately pull them in and work on strategies with them on how to avoid and get away as well as how to report it,” she said.

The administrator was quick to point out that the physical altercations are not necessarily categorized as “bullying.”

She also noted that for the most part, middle school aged students are always undergoing an awkward transition.

“That’s why it is called the “tween years” because they are in between. The students have left the nurturing environment of just one teacher. Now they go to an environment that is equally nurturing but now they have six different teachers they are dealing with and the students are passing each other in the hallways. They’re growing and sometimes they don’t realize their strength. They will accidentally run into each other and someone will take that the wrong way. This report is not about bullying. This is just our physical violence and weapons report,” she said.

Friel said the district has a firm policy on fighting where both the initiator and the victim are treated equally in terms of discipline and punishment.

“It’s an immediate suspension for both parties and the reason is to allow the school to hold an investigation and find out what exactly led to the fight. The outcome of the investigation will determine what will happen to the students involved,” she said.

More than 90 incidents without injury were also reported at the school.

Friel said she attributes the discrepancy to the actual population of the schools.

“Seventy percent of our student population is here in the south while 30 percent is in the north. When you put the percentages to the population, they are about equal percentage-wise,” she said.

On a brighter note, there were several northern Nye County schools where no discipline incidents were reported.

Gabbs, Round Mountain and Duckwater Elementary and Middle School reported zero instances of problem behavior as did Beatty Elementary.

Gabbs was also the only high school where no instances of fighting were reported.

Beatty Middle School, however, did report just one instance of fighting with injury.

Among southern Nye County elementary schools, J.G. Johnson had the most student scuffles with 31 incidents where just two resulted in injury.

Friel said that Pathways Alternative School was the only southern district campus that reported no discipline incidents at all.

“The report shows that we are meeting the needs of our Pathways students. They are doing a lot of their work at home. They come to school according to their schedule for the week and they get their job done,” she said.

The district is required to forward their report to the Nevada Department of Education by tomorrow.