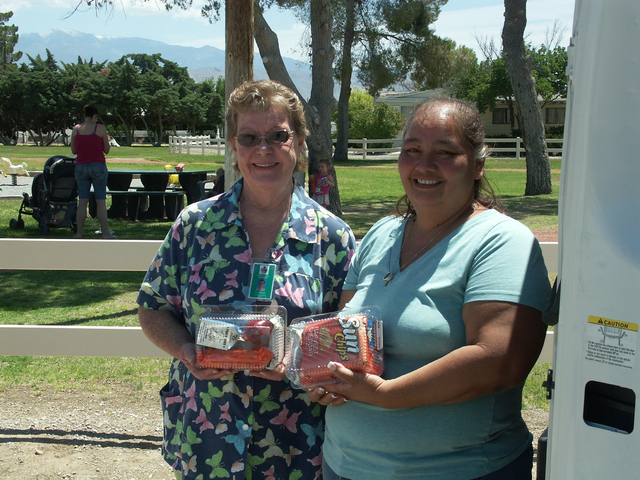 Nye County School District officials are urging parents to take advantage of a valuable program or risk losing it.

The district is again sponsoring its Summer Food Program where free meals are served to all kids ages 18 and under.

Food Service Supervisor Dawna Braithwaite said the program is designed to fill the void for kids whose parents have limited incomes.

“With some kids during the school year, their breakfast and lunch at school is the only meal they will have that day,” she said. “Sometimes you would not know that because there’s always that stigma which is really sad because there are obviously a lot of hungry children in the community.

The program is two-fold, where local parents can either take their kids to two area schools where breakfast is served from 7:30 to 8:30 a.m., while lunch is provided from 11:30 to 12:30 Monday through Friday.

“The program costs absolutely nothing and there is no qualifying,” she said. “All you have to do is show up at one of our sites and if you’re 18 and under, you’re good to go and you get a meal.”

As an alternative, Braithwaite said the district for the second year, is rolling out its Mobile Feeding Van, which makes 10-minute stops at four locations around town.

She noted that the new program is not yet getting the response from the parents and kids that the district was anticipating.

“I don’t understand why we’re not getting a large response because our timetables are good,” she said. “It’s a brand new program and last year we went to the Courtyard Apartments, Comstock Park and Petrack Park. This year we added Simkins Park and people can stop by the van and pick up their meal.”

Braithwaite also said the program is looking to add more variety to the menu.

“Last year we did a lot of cold sandwiches but this year we’re trying to provide more hot food like burritos, chalupas and Hot Pockets,” she said. “We just want to provide a little more variety so that it’s not so mundane.”

On Wednesday, one local parent praised the program as she and her children enjoyed a picnic under a shade tree at Comstock Park.

“I think this is one of the most beneficial things provided by the school district because there are kids who do go hungry because their only food source is when they are in school.”

Burrows also urged other parents to support the program by simply dropping by and visiting with the feeding van team.

“I spoke to some of the parents last year and they were kind of worried that we would not have enough numbers to make it happen again this year and luckily we did,” she said. “Even if a parent doesn’t want to come or doesn’t need to come, they should come anyway at least once a week so that we have the support for this valuable program for the kids who do need it.”

The new program appears to be catching the attention of some local parents.

“Parents are reacting quite well,” she said. “This one stop today at Comstock had more kids this year than we did all of last year. We also have been Facebooking it too. The parents seemed to really enjoy it. On the menu today, we have ham and cheese sandwiches, apple pie, and an apple along with milk and chips and it’s contained all in a neat little box.”

Braithwaite also reminded parents about the district’s Free and Reduced Lunch Program, which she said applications can be found at each school site.

“All parents have to do is fill out an application where they qualify by income unless they are directly certified through the Supplemental Nutrition Assistance Program (SNAP) or Temporary Assistance for Needy Families (TANF) where they don’t have to worry about the application. I would urge parents to start early.”