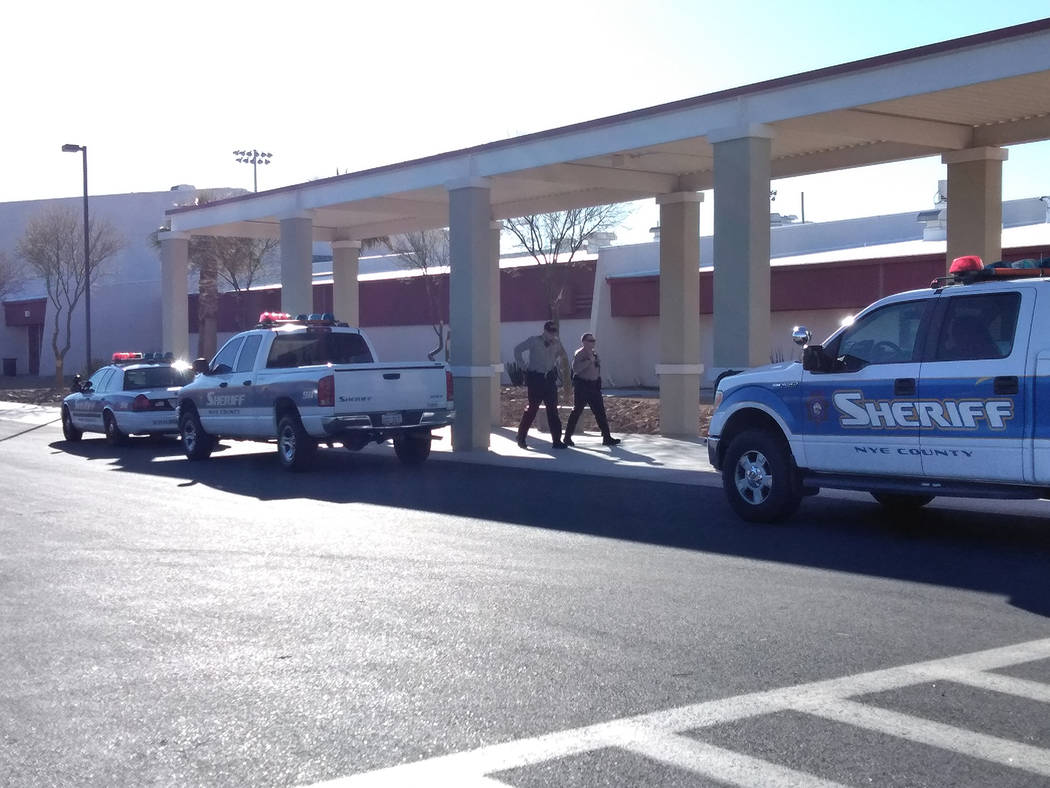 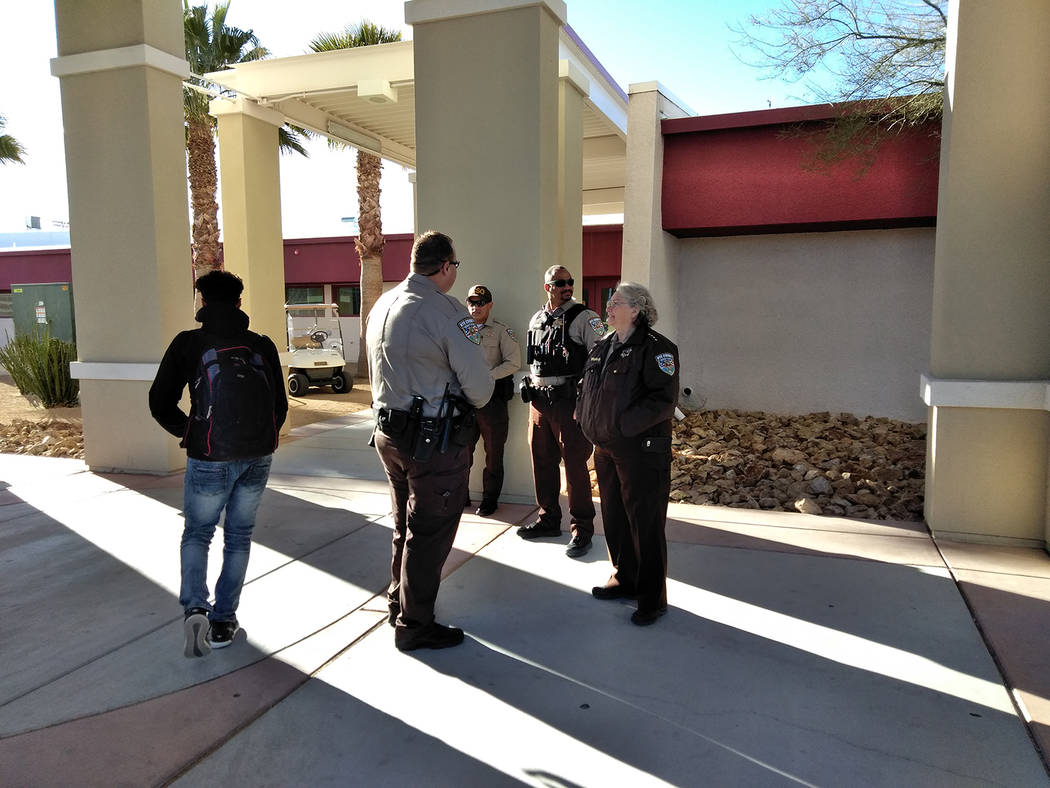 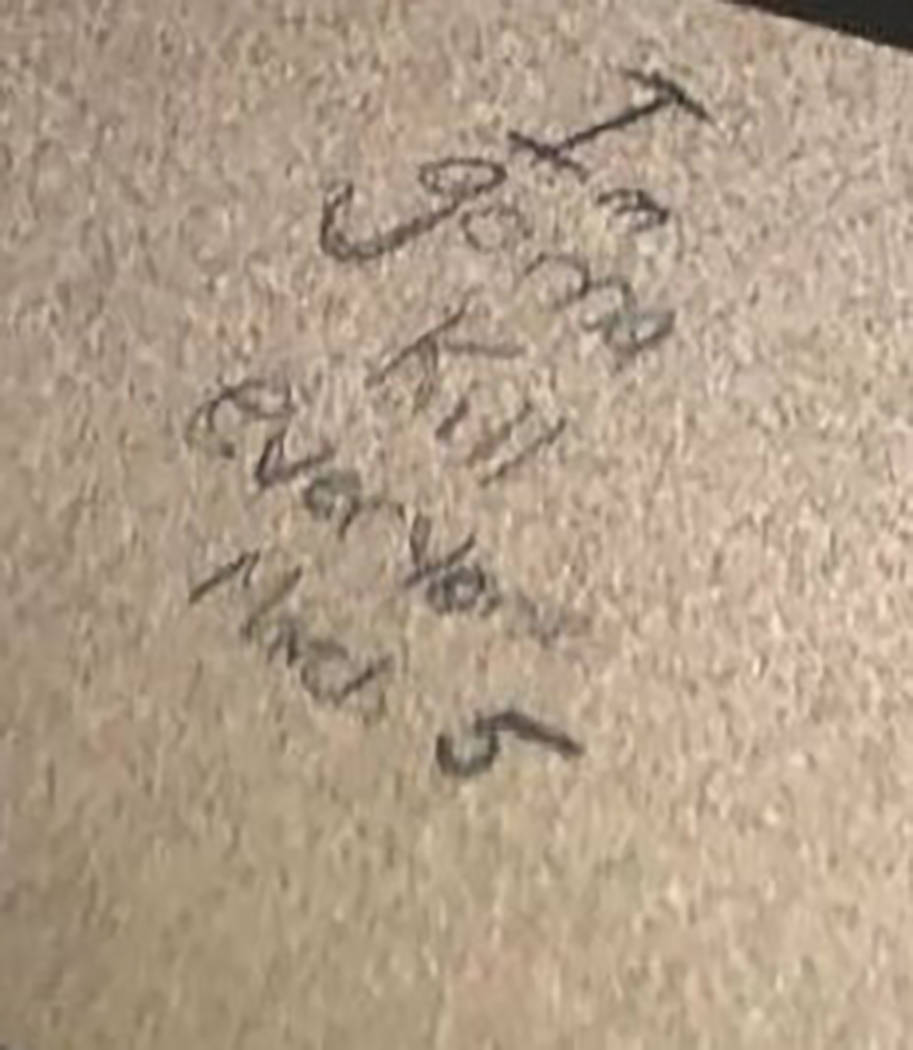 Nye County Sheriff's Office The sheriff's office reports that a threat was on the wall of a bathroom found past Friday. Sheriff’s Lt. David Boruchowitz said all threats are always taken seriously

On Friday, Nye County Sheriff’s Office detectives and deputies saw the literal writing on the wall inside a bathroom at the school.

While parked across the street from the school entrance, watching students arriving on campus Monday morning, Nye County Sheriff’s Office Lt. David Boruchowitz said all threats are always taken seriously by the agency.

“We are not taking any chances,” Boruchowitz said. “We spent all weekend investigating the threat, but right now we have zero information that any kind of threat is credible. As a precaution, we are here and will be here all day just to make sure everything goes smoothly for the faculty and students. This all came about from a written threat found on a bathroom wall.”

Boruchowitz also spoke about two arrests made last week regarding terroristic threats made toward Rosemary Clarke Middle School, where at least one student threatened to bring a handgun to school.

The suspects in the separate cases were two girls, ages 11 and 12.

Both are facing felony charges.

One of the arrests was made after an investigation into a Snapchat post about a shooter coming to the middle school, according to a release from the sheriff’s office.

That girl was turned over to county juvenile probation officials and subsequently placed on house arrest, according to the sheriff’s office.

Boruchowitz did note that the incidents were not related to the situation at the high school on Monday.

“We made an arrest at the middle school on Friday and we made another arrest for a threat last Thursday,” he said. “Those kids were charged with making or uttering a false terroristic threat. It’s a very serious charge and obviously, these kids need to realize that this is not a game to be playing.”

Whether credible evidence exists or not, Boruchowitz said the sheriff’s office will respond to any and all perceived terroristic threats to area schools.

“We have to ensure the safety of our children and let parents be assured that their sons and daughters are safe at school. We have to respond and we do respond.”

Additionally, he implored parents and guardians to be more mindful of their children’s social media habits.

“Our plea is to have parents more proactive and knowledgeable with the use of their kids’ social media platforms,” he said. “The parents are the ones that really need to get into their kids’ lives and do their best to look out for and try to prevent this type of thing. “We look at the social media of many of the kids that we are involved with, just to see what they are up to. Many times their parents don’t have a clue about what is going on in their lives socially.”

The action was among hundreds of similar protests taking place around the country in response to last month’s Valentine’s Day massacre at Marjory Stoneman Douglas High School in Parkland, Florida.

The mass shooting killed 17 and injured more than a dozen students and faculty members.