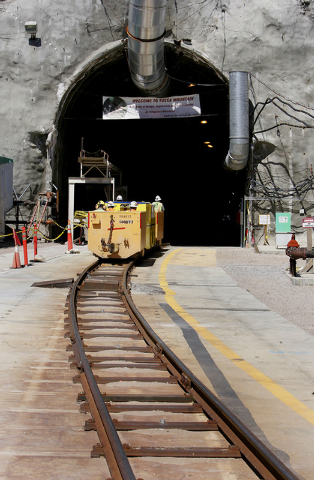 WASHINGTON — The new chairman of a Senate energy panel on Thursday announced he plans to focus on nuclear energy this year, including a bid to end an impasse on nuclear waste created when the Yucca Mountain repository was terminated.

Sen. Lamar Alexander, R-Tenn., told a nuclear industry audience he would convene a series of hearings on nuclear power as the new leader of the Senate energy and water subcommittee.

Among the topics: nuclear waste, where a number of Republicans and some Democrats want to find a way to resurrect the Yucca program despite a vow from Sen. Harry Reid, D-Nev., that the contentious Nevada project “will never see the light of day.”

“There is renewed hope under our Republican majority that we can solve the 25-year-old stalemate on what to do with waste from our nuclear reactors — and Yucca Mountain can and should be part of the solution,” Alexander said in a speech to about 150 people at the Nuclear Energy Institute.

The bill also would authorize the Department of Energy to start recruiting states willing to host a permanent repository that he said could supplement Yucca Mountain when the Nevada site would be filled to a 77,000-ton capacity.

The measure would incorporate many of the recommendations of a blue ribbon commission that President Barack Obama formed after ending the Yucca program, including a call that a search for a new repository be “consent-based” rather than imposed on a state, as was what happened in the selection of Nevada.

After the speech, Alexander told reporters his plan to overcome Reid’s determined opposition to Yucca Mountain was to “keep trying.” He declined to guess how senators would vote on Yucca Mountain if a vote were held.

Alexander’s state has a history with nuclear energy, and he is one of the Senate’s leading advocates of the energy source.

Tennessee is home to three nuclear plants operated by the Tennessee Valley Authority that generate 36 percent of the state’s electricity, and a fourth is being built, according to the Nuclear Energy Institute. The town of Oak Ridge was established during World War II as part of the nuclear bomb building Manhattan Project and today is home to the sprawling Oak Ridge National Laboratory.

In his speech, Alexander called for a consistent role for nuclear energy in the nation’s electricity mix. He advocated building more nuclear reactors, relieving “excessive regulation” of nuclear plant builders and operators, doubling energy research and ending “wasteful” tax credits for wind energy and other sources that compete with nuclear power.