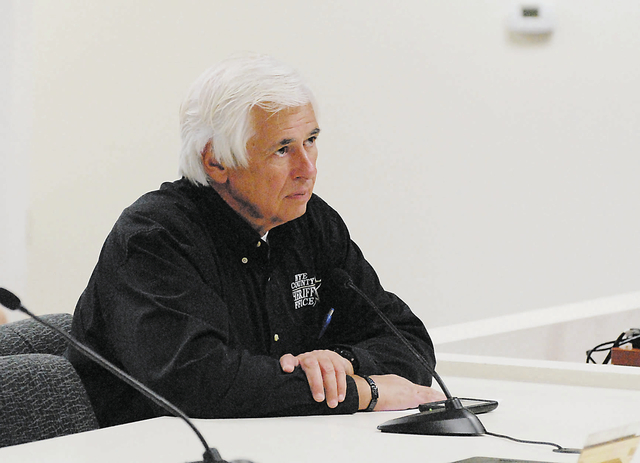 Local resident Michael Augustine wants to put rumors to rest and address concerns about an event his organization is planning for late April at Petrack Park.

Just days after announcing plans for a music festival and cannabis expo, the Nye Cannabis Coalition (NCC) founder heard talk the event will be a free-for-all pot party for anyone who wishes to partake.

Augustine maintains nothing could be further from the truth.

He said the event, known as the “High Desert Cup Music Festival and Cannabis Expo,” is a three-day affair tentatively scheduled to begin April 18; its focus is mainly on educating the community about the beneficial aspects of medicinal marijuana.

News of the festival comes about six months after the Nevada Legislature passed a bill for medical marijuana dispensaries to legally operate throughout the Silver State.

Nye County Sheriff Tony DeMeo is staunchly opposed to what he believes is a bad idea on the part of the NCC.

He noted that he did not personally speak to Pahrump Town Manager Susan Holecheck, who said last week that plans for the event were reviewed and ultimately “signed off” by the sheriff’s office.

“I am not for it honestly. I didn’t sign anything, but they came to the office and apparently spoke to Assistant Sheriff Rick Marshall. Until they have a security plan in place, and I know what’s going on, I am not signing off on anything and neither would Rick Marshall sign off on anything. I was never briefed on it and whoever told Susan Holecheck that the sheriff was briefed and was fully aware of it, was wrong about that,” DeMeo said.

Marshall, meanwhile, said this week that the action Holecheck was referring to was a normal process that did not have anything to do with the sheriff’s office granting any type of permission.

“Susan was talking about any time a special event occurs that will attract people, there is a document that the person who is putting it on must fill out. It is just a notification form. It’s not a signing off form or anything like that. The sheriff’s office, the fire department, and the town obviously have to be notified. All it does is to notify the entities that they will be holding the event. We have no authority to say no or yes,” he said.

Additionally, Marshall took the news of the event in stride, suggesting it was just another event in the life of a law enforcement officer.

“It definitely could bring some challenges in terms of keeping it safe and secure. Other than that, it’s just another day in the life of being a police officer. If there is illegal activity going on, then naturally we will respond to it. If there is no illegal activity, there shouldn’t really be any major problems for us to handle there,” he said.

Nevada is one of more than a dozen states across the nation that has decriminalized the personal use of marijuana by adults 21 and older who obtain a prescription from a doctor.

As of last Wednesday, officials in Colorado began to tax and regulate marijuana for legal recreational use; Washington state is not far behind.

Still, DeMeo questioned the judgment of Gov. Brian Sandoval when the senate bill was passed and forwarded to the governor’s desk for Sandoval’s signature last June.

He suggested the governor’s actions were reckless and talk of a revenue windfall for the county was at best specious.

“They keep talking about it’s going to bring $500 million to schools. Not only that, for a society that says you shouldn’t smoke cigarettes, they think that legalizing a hallucinogenic drug is okay. What’s next, legalizing heroin and cocaine and all these other drugs? Why don’t they just put cocaine back in coca cola products? I think it’s a travesty. What does that say to the kids?” he exclaimed.

Augustine, meanwhile, said he is pleased to learn that many Americans now look at cannabis as being a relatively safe substance for adults and it should be treated as such.

He wants to use the event as a way to inform and educate.

“Cannabis prohibition must end. I pray that my hometown does not see me as a lunatic or drug-crazed psycho because I am not. The cannabis cause is wide awake and alert. It’s been a great start to 2014 because smart, organized and responsible individuals are stepping up to make sure that this event succeeds,” he said.

Even though the planning and organization is just now getting off the ground, Augustine said the initial response from many in the community exceed his expectations.

“The initial press has been positive and the rifts have been minor, even with the rumbles of opposing groups wanting to stop the High Desert Cup. Vendor and sponsor applications and responsibilities including event rules, park layout and expectations of participants are in the works. We are shooting for Jan. 25 to have the packages ready. Suggestions are always welcome and volunteers are very much needed,” he said.