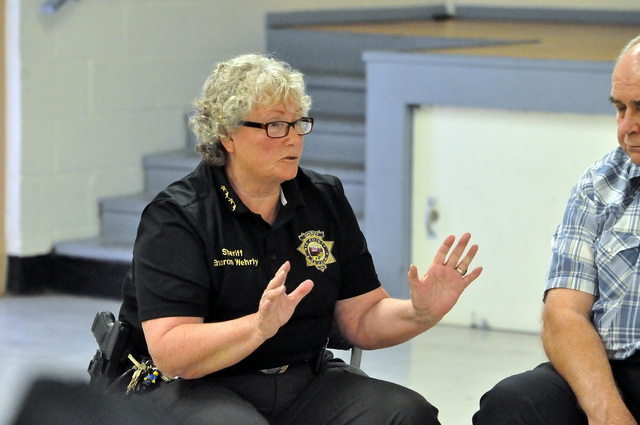 Nye County Sheriff’s Department could get body cameras as soon as this year.

Sharon Wehrly, Nye County sheriff, said the department is negotiating funds for the purchase with the county officials. The purchase will be contingent upon the county’s approval.

“I certainly hope I can expect something this year, nothing is in stone,” Wehrly said. “But that’s the direction that we are going.”

The department is looking to purchase about 70 body cameras for patrol officers across Nye County and also new stun guns.

“We are not sure when we are getting them. It’s inevitable that we are going to get them,” Wehrly said about body cameras.

The money for the purchase could come from the county’s capital fund, officials said.

Wehrly said county officials also have been talking to TASER, a Scottsdale, Arizona-based manufacturer of Tasers and body cameras.

Steve Tuttle, vice president of strategic communications at TASER, said the company sells Axon Flex camera for $599 per unit and Axon Body 2 cameras for $399 per unit.

Tuttle cited case studies that show that citizen complaints against officers drop, as does use of force by police when body cameras are used.

“Our body-worn cameras allow officers to focus on what matters and to act with confidence by getting to the truth faster with the best available evidence in times where transparency is truly crucial,” Tuttle said.

Tuttle said TASER cameras capture the video before the event button is activated thanks to buffer recordings. In addition, evidence is saved to the cloud in evidence.com that can redact video, provide a full chain of custody of the digital evidence with audit trails and can share with prosecuting attorneys and have evidence comply with Criminal Justice Information Services (CJIS) standards.

“If you combined all of the competitors together, they can match the 32 major cities (with) populations greater than 500,000 (people) that deploy our Axon cameras,” Tuttle said.

The protocols for wearing body cameras are set by the individual law enforcement agencies, Tuttle said.

Some states, however, have different regulations concerning the Freedom of Information Act and retention, he added.

“Storing the data is as simple as putting the camera on the charging station, which is connected to the Internet,” he said. “We call it dock and walk. All videos are securely uploaded and removed from the camera while recharging the camera.”

“Body cam, the data collection system and a Taser all work together. It’s a whole system,” he said.

Tuttle declined to comment on negotiations with Nye County.

”We can’t disclose any ongoing negotiations between any law enforcement agencies as we’re a publicly traded company and we don’t comment until purchase orders are in hand,” he said.