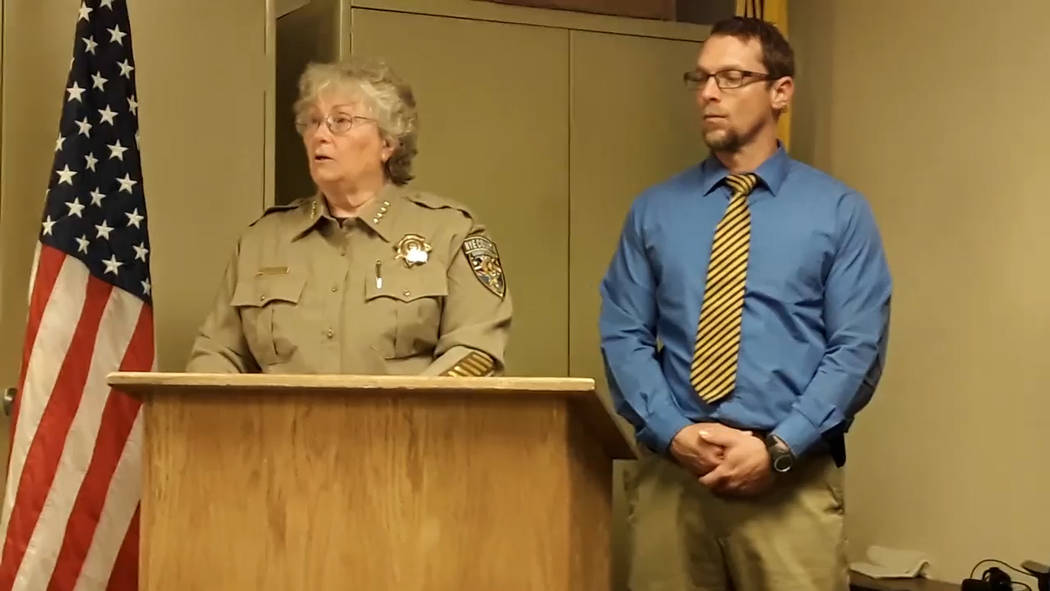 A Nye County Sheriff’s deputy is on administrative leave after shooting at a fleeing suspect in Pahrump. Neither the suspect, nor the deputy, were injured during the foot chase.

Sheriff’s Office Deputy James Ramos was named as the officer involved in the shooting during a press conference on Friday by the sheriff’s office. Ramos has been a deputy for the Nye County Sheriff’s Office for four years and is currently assigned to the field services patrol division, and is a member of the special weapons and tactics team.

During a sheriff’s office press conference, Nye County Sheriff Sharon Wehrly provided details on the incident which occurred behind Walmart on Feb. 26.

Responding deputies at the time were wearing body cameras, the sheriff said, while noting the shooting was non-fatal.

“The officer-involved shooting was behind Walmart on Dahlia Street where one of the suspects was stopped after trying to flee on foot from sheriff’s deputies,” Wehrly said.

”The other deputy involved in this incident was Deputy Xavier Gideon who has one year and six months of service, and is also currently assigned to the field services patrol division,” Wehrly said.

The suspect involved in the shooting was identified as Joseph Beltran, 24, of Las Vegas, who is one of four suspects arrested after allegedly attempting to steal merchandise from Walmart.

One of the three additional suspects was identified as Larry Hermansen, 34 of Las Vegas, who was also allegedly in possession of heroin. Hermansen was arrested on suspicion of conspiracy to commit grand larceny, conspiracy to burglary, possession of a controlled substance, trafficking a controlled substance, resisting a public officer, obstructing a peace officer, participation in an organized retail theft, grand larceny and burglary.

Stephen Cooke, 34, of Henderson was identified as the alleged getaway driver by the sheriff’s office. Cooke was arrested on suspicion of display of bogus vehicle plate/registration, proof of insurance required, owning or possessing a gun by a prohibited person, use or possession of drug paraphernalia and accessory to burglary.

Sally Diaz, 29 of Las Vegas, was also identified as a suspect in the alleged theft of merchandise as Walmart. Diaz was arrested on suspicion of conspiracy to burglary, burglary, participation in an organized retail theft an grand larceny.

Wehrly spoke about the alleged events that led up to the office-involved shooting during the press conference.

“Walmart asset protection employees called the Nye County Sheriff’s Office to report that there were four people, one female and three males, inside the store opening packages and concealing merchandise inside of suitcases,” Wehrly told the assembled press corps. “Deputies responded and met with asset protection employees inside the surveillance room and observed the suspects stealing merchandise from the store.”

Wehrly went on to say that Deputy Ramos and others observed the suspects leave the store—one of which who was allegedly Beltran. Beltran allegedly exited the store from the rear automotive exit doors.

All the suspects, except Beltran, were located and detained in the parking lot by responding deputies.

The round fired by Deputy Ramos’ duty-issued Glock-17 semi-automatic handgun, equipped with a tactical light, hit a cement block wall of the Walmart building, but did not penetrate the wall, according to the sheriff’s office.

As Deputy Ramos was taking Beltran into custody, Deputy Gideon assisted in the arrest, where Beltran was taken into custody without further incident.

Following a thorough search, no weapon was found on Beltran.

Wehrly also provided body cam footage of the foot-pursuit, including the sound of gunfire from the deputy’s weapon.

Following Wehrly’s narrative of the incident, she took questions from media representatives.

One question inquired whether it was department policy to shoot at a suspected shoplifter, who was running from deputies.

“It depends upon the circumstances,” she said.

While viewing the body cam footage it appeared the suspect was not in a threatening position, to which Wehrly said the incident under investigation.

“That’s all I can say about that at the moment,”

Regarding what type of merchandise the suspect’s were allegedly stealing, Wehrly replied, anything and everything.

“They had clothing, cameras,and electronic equipment,” she said. “You name it, and they had it.

“They just travel from site to site, so they pick out something likely and they move in on it,” she said.

Deputy Ramos, according to Wehrly, will remain on administrative leave until the investigation is concluded.

That suspect who was in possession of a cylindrical object sustained fatal gunshot wounds when he refused to adhere to verbal commands of both agencies, while approaching the officers.