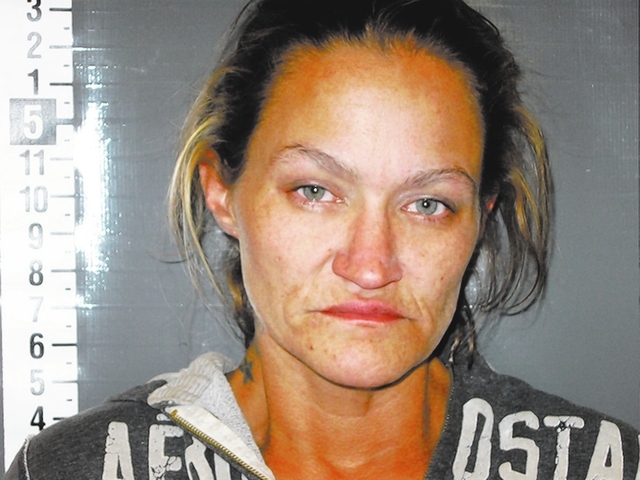 An investigation into a theft from the local Walmart parking lot last week led to the arrest of one woman police say has victimized as many as 80 people, stealing their mail and other personal property in attempts to get money using their private information.

Melisa Marie Caruso, 33, of Pahrump, was taken into custody around 12:30 a.m. Oct. 30 on charges of petit larceny, possession of credit card without cardholder’s consent, possession of stolen property, burglary, destroy/conceal evidence, possession of a controlled substance, grand larceny and obtain ID of another after a Nye County Sheriff’s deputy was dispatched to Walmart for a report of a theft on Oct. 28.

According to an arrest report in the case, the victims of a parking lot theft that led to Caruso’s arrest reported several items, including a purse, backpack, wallet, jewelry, school books, school work, medications, $120 and keys, were taken from the vehicle while it was parked in the retailer’s parking lot that evening.

Upon reviewing the store’s surveillance footage, the deputy reportedly saw a person dressed in a grey sweatshirt walk up to the vehicle and get in on the driver’s side. The officer then reported seeing the suspect exit the vehicle and re-enter it on the passenger’s side before again exiting and walking southbound toward a white Dodge truck with dark tint and chrome rims that was also parked in the parking lot. After entering the truck, the suspect reportedly left the scene.

The following day Walmart employees contacted police to say a truck matching the description of the one the suspect left in the night before was back on the property and that the driver was a woman wearing a grey sweatshirt pushing a grey stroller through the store.

The deputy subsequently found Caruso in the bathroom of the store.

When asked if she had taken any merchandise into the restroom with her, Caruso allegedly replied she had, pulling out a black purse, with the sales tags still on it, from behind a child sitting in her stroller.

When asked if she planned to pay for the purse or other items she had placed within it, Caruso allegedly replied she did not. The price of the purse and items contained within was approximately $133, according to a declaration of arrest in the case.

During a subsequent search of Caruso’s vehicle, the investigating deputy reportedly discovered several pieces of mail with eight different names on them, which were still sealed.

Caruso allegedly admitted to the deputy she didn’t know the people the mail was addressed to and that she had stolen it out of mailboxes in various locations around Pahrump.

One of the envelopes found in Caruso’s vehicle allegedly contained a government check, which was not addressed to her, in the amount of $634.50.

In addition to the mail, the deputy also allegedly discovered several credit cards with different names on them as well, which Caruso allegedly admitted she had also stolen, but told the officer she had only used one of them.

Caruso was subsequently placed under arrest, at which time she allegedly told the officer if she drove Caruso to her residence she would retrieve the additional missing items belonging to the victims she had stolen from on Oct. 28.

As police searched the woman’s home with her consent, they reportedly discovered hundreds of pieces of personal property belonging to others, including mail, bank statements, credit cards and other property containing identifying information for others.

Based on the evidence collected, police say they believe Caruso was attempting to steal the identities of those individuals.

NCSO detectives and deputies say they have identified approximately 80 victims so far and are in the process of calling each one to ascertain the circumstances that their information was compromised.

Caruso was booked into the Nye County Detention Center on charges relating to these thefts and as of Tuesday morning remained there on $33,140 bail.