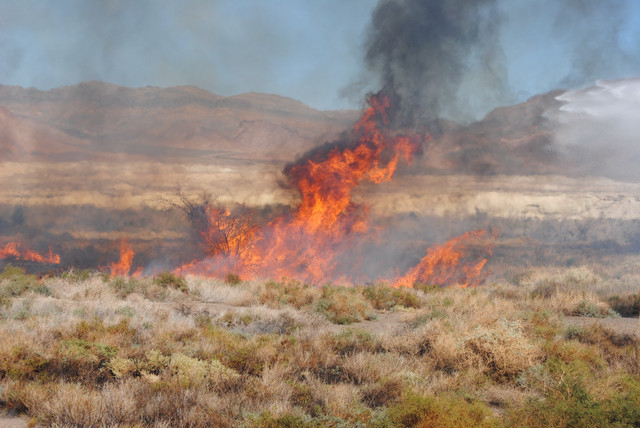 SHOSHONE, CALIF. — Apparently ignited by a downed power pole and fed by a fickle wind, the flames of a noontime wildfire threatened the historic town of Shoshone on Sunday, forcing its evacuation.

The blaze consumed two mobile homes, knocked out six power poles and ravaged open brush land before being brought under control at dusk by a six-agency collaborative effort.

“There was so much luck involved,” Southern Inyo Fire Chief Larry Levy said. “If the wind had been even a few degrees west it might have taken it all out.”

Inyo County Sheriff’s Deputy Joe Seton was at the Shoshone substation a little before noon when he looked out the window and saw the blaze. As luck would have it, he was on the phone with SIFPD Admin Chief Carl Dennett at the time. Seton reported power lines “dangling and bouncing” and a blaze heading toward the town. Dennett and the Southern Inyo Fire crew, located 12 miles away in Tecopa, were able to mobilize and respond quickly, Dennett said.

“Upon my arrival I found several well-involved structures with additional, immediate exposure of residential and commercial structures, a venting propane tank that had about a 20-foot vertical flame length,” Lewis said.

Lewis also said the fire was not the only danger his crews were facing at the scene.

“There were burning utility poles, downed power lines, which were energized and developing spot fires,” he said. “The winds were probably in excess of 40 miles per hour, which was pushing the fire toward additional dry fuel. The structure fire which presented a number of hazards, quickly turned into a large-scale, fast-moving brush fire.”

SIFPD’s Chief Larry Levy estimates there were well over 50 firefighters on scene at the height of the blaze. Their main focus, he said, was to keep the fire from spreading to the historic structures along the east side of Highway 127, Shoshone’s main thoroughfare, and from jumping over Highway 178 and spreading farther south.

And their luck held out, said Levy, as each new crew arrived “just in the nick of time to save the next thing down the line that was threatened.”

“It was one of the high points of my life,” said SIFPD’s Billy Eichenbaum, an EMT standing by on scene in case of injury. “To watch how all those crews came together to save that town. And I am so proud of our team, our small group of unpaid volunteers who worked so hard. They saved that clinic, I watched them do that.”

Shoshone residents were evacuated for several hours during the fire, all access roads were blocked off and traffic was diverted around Shoshone while the fire crews battled to keep the blaze away from the highway. Phone and electrical service were disrupted by the fallen poles and some melted wires.

Most flames had been subdued by about 7 p.m. but embers continued to smolder in the brush land and flare up with the wind, Levy reported. After most responding mutual aid agencies returned to their own areas in the evening, the six-member SIFPD crew remained in Shoshone patrolling the ground and putting out flare-ups until they were relieved by a fleet of Bureau of Land Management Hot Shot crews Monday morning.

Whether the fire was caused by a downed power line or some other source has not been determined, said Chief Levy, and is still under investigation. He confirmed that the fire started in one of two older mobile homes belonging to the Shoshone Education and Resource Center, a home base for geology students and others on academic field trips to the area. The buildings were uninhabited at the time and no injuries were reported.

Electricity was restored in Shoshone around 4 p.m on Monday, but repair crews estimate phone service will take some time, according to Chief Levy, since many of those lines fell into the brush blaze and melted.

The fire comes as the Southern Inyo Fire Protection Department is preparing to hold a fundraiser in Pahrump this weekend at The Hubb. “Buy A Burger, Save A Life” is the theme.

Live bands will play and the event goes from 11 a.m. to 5 p.m. with raffle tickets and handmade items for sale.