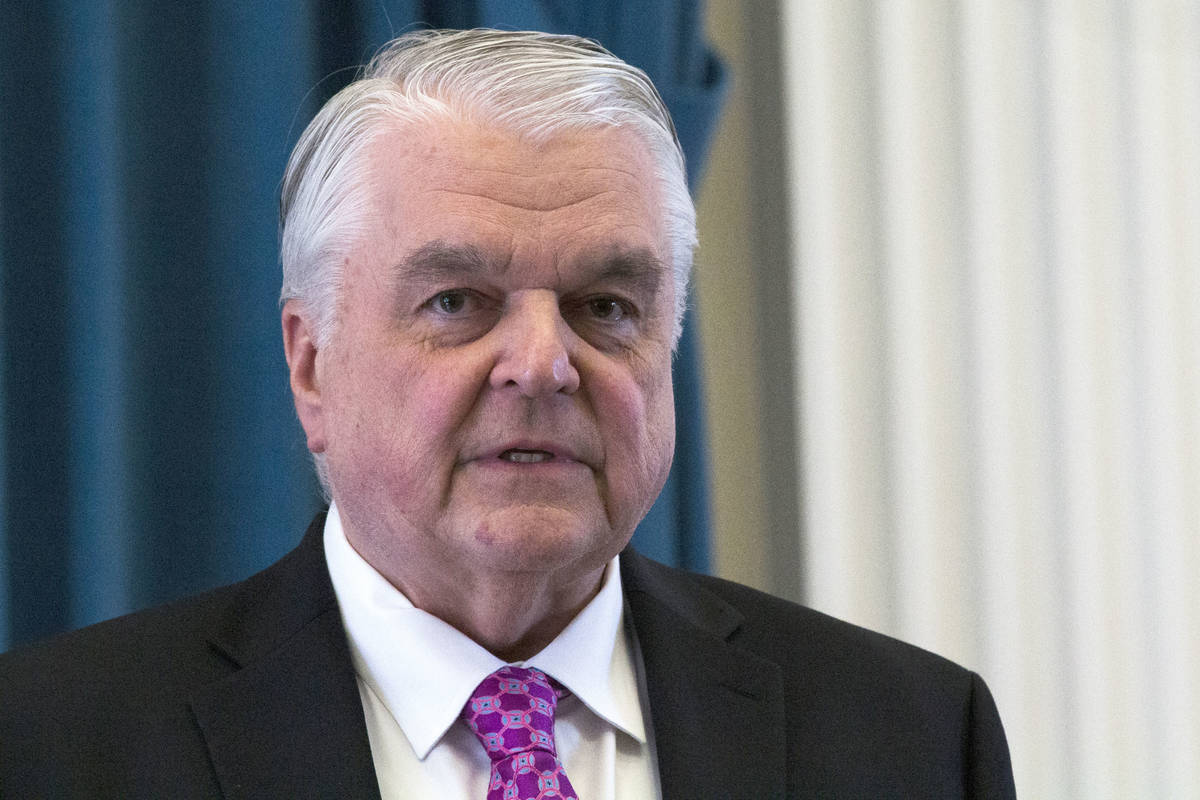 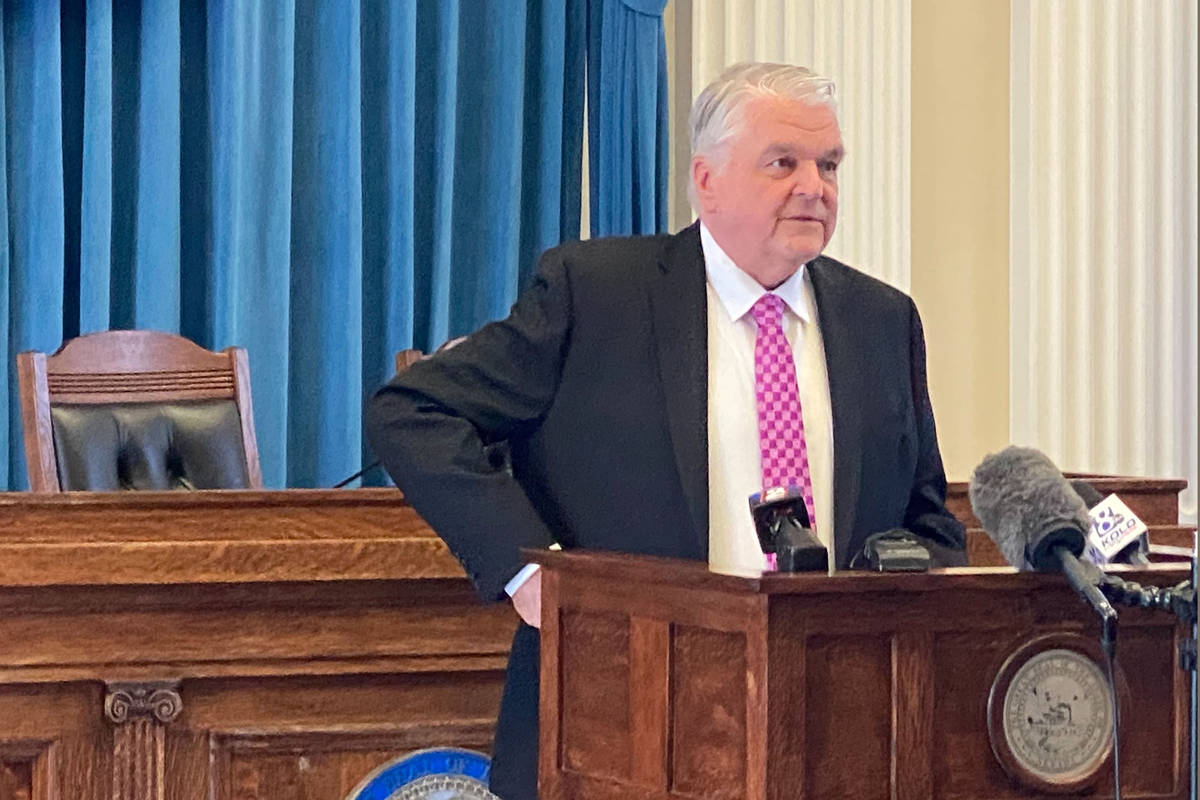 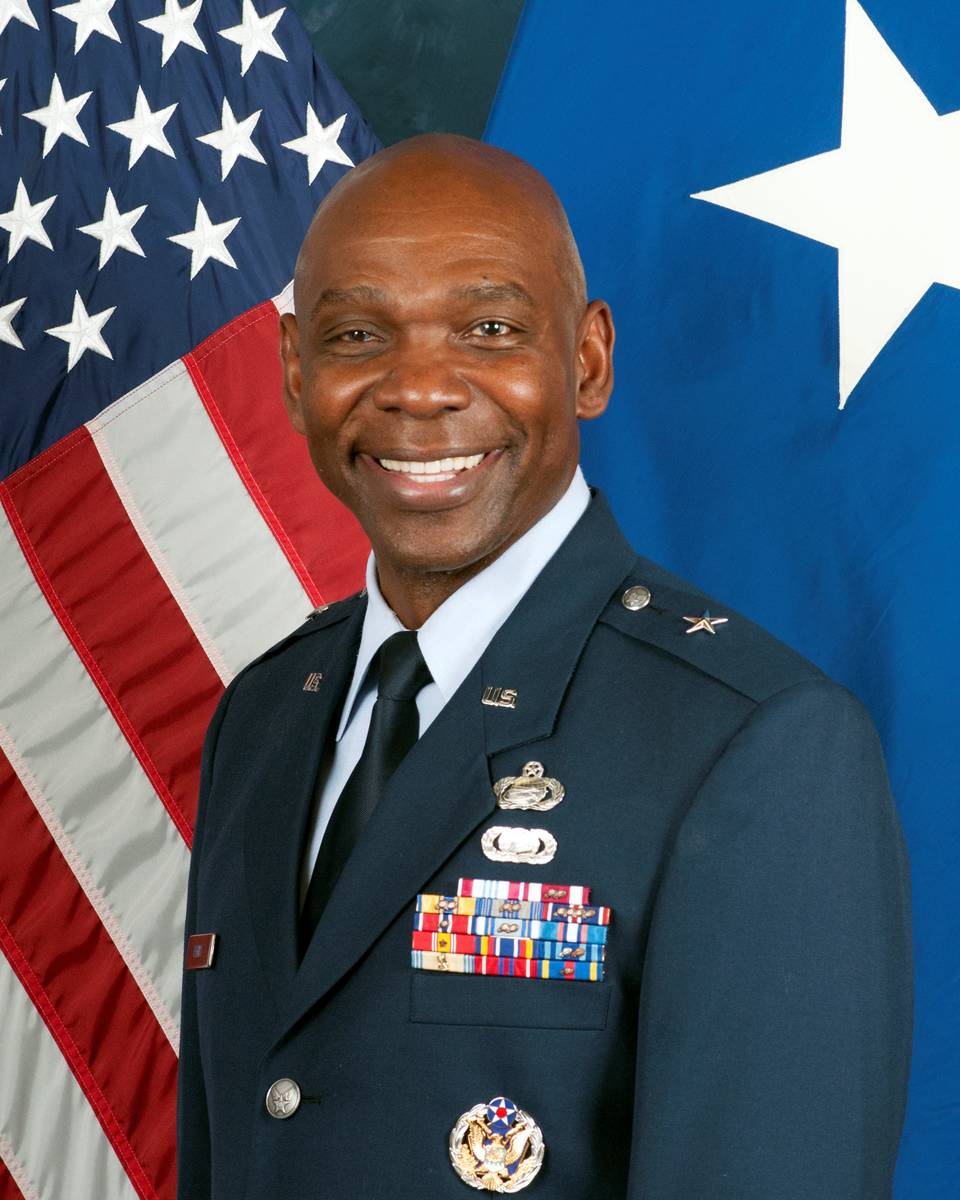 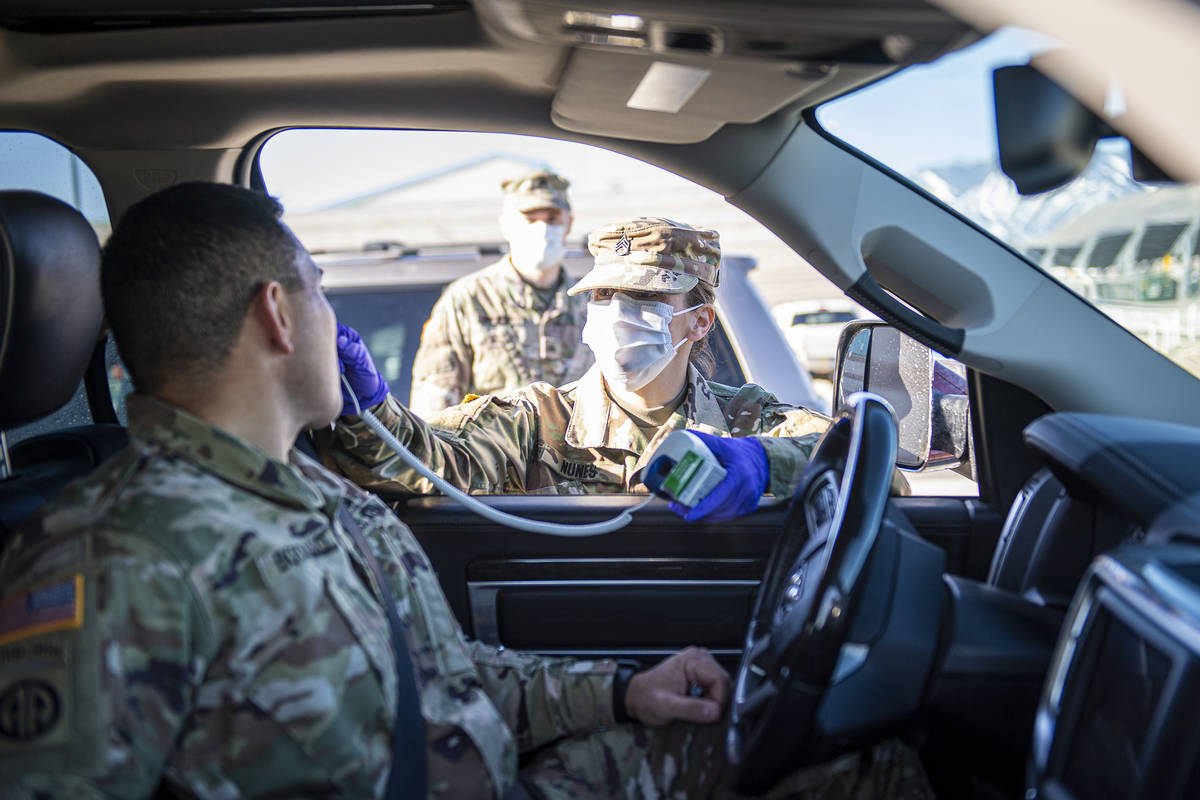 National Guard/Sgt. Walter H. Lowell Staff Sgt. Jennifer Nunes, a health care specialist assigned to the Northern Nevada Medical Detachment Nevada National Guard, checks the temperature of a soldier at the front gate of the Office of the Adjutant General complex in Carson City, April 1, 2020. The Nevada National Guard started screening the soldiers, airmen, and civilians that continue to work despite the COVID-19 outbreak.

Gov. Steve Sisolak joined Major General Ondra L. Berry on Thursday to announce the activation of the Nevada National Guard, among other measures the state has taken during the COVID-19 virus.

“As of this afternoon, more than 1,200 of our Nevadans have tested positive for this virus, and 32 of them have lost their lives to this deadly disease,” Sisolak said. “We know that testing more Nevadans is a critical step in battling this invisible enemy. Unfortunately, access to testing is a problem plaguing our entire nation, not just our state.”

“Dr. Pandori aggressively pursued new FDA approvals to expand lab testing capabilities for Nevada and is also using FEMA materials to build test collection kits for Nevada,” Sisolak said. “This is the kind of smart, innovative leadership needed during this crisis, and every Nevadan should join me in being immensely grateful and proud of Dr. Pandori and his team.”

About 100 National Guard soldiers and airmen will join the Guard’s COVID-19 response effort this week, joining some 17,000 Guardsmen that have already been called up across the nation to fight the virus.

According to a press release from the Nevada Office of the Military, the soldiers and airmen being activated in Nevada will be placed on state active duty and work under Sisolak’s direction. However, the Guardsmen’s compensation will come from federal funding.

These are the first Nevada guardsmen to be called up for the effort against COVID-19.

“The military occupations of the soldiers and airmen have not been finalized, but it is likely the governor will call upon guardsmen trained for medical, security, transportation, logistical and food services,” the Office of the Military stated. “The exact missions and locations of the Guardsmen are being finalized, but it is likely the soldiers and airmen will be split evenly between Southern and Northern Nevada.”

The release stated, “Although the missions the governor will request from the Nevada National Guard are pending, familiar types of support the National Guard has been providing across the country include: working to increase medical capacity, providing security at testing sites, managing food banks, delivering food and critical supplies, and disinfecting public spaces.”

The governor also announced during his press conference that he signed the Battle Born Medical Corps emergency directive today, which is aimed at expanding our health care workforce to fight COVID-19.

“This directive will waive certain licensing requirements to allow us to quickly bring additional health care workers into our hospitals where we so desperately need them right now,” Sisolak said. “It will allow people who have retired to come back into practice without leaping over hurdles. It will allow professionals from other states to come here to help. It allows people with medical training from other countries to work alongside us as we fight this disease.

“And it will make sure we can do this without all the red tape that usually slows down these processes.”

The governor also announced that $6.25 million in state funding was approved, pending approval from the Interim Finance Committee, at a Board of Examiners meeting today. These funds will grant Nevada access to FEMA monies and will be directed to, among other items crucial to the response, the purchase of critical personal protective equipment.

Sisolak earlier had announced that the Division of Emergency Management and the Department of Health and Human Services would be aligned temporarily with the Nevada Office of the Military, led by Berry, who was pinned as a major general this week.

“We are living in unprecedented times, and Nevada is joining many other states across our great nation in utilizing the National Guard to help manage the crisis,” Sisolak said. “From delivering critical medical equipment and supplies to providing a labor force and planning the massive logistical operations needed to get resources from point A to point B, no one is better.”

Sisolak said the Guard was particularly well-suited to helping the state’s residents deal with the outbreak.

“They are also the foremost experts on logistics and managing crises. When the Guard gets called in, you know you’re dealing with the best of the best, and our children, parents and grandparents deserve nothing less.”