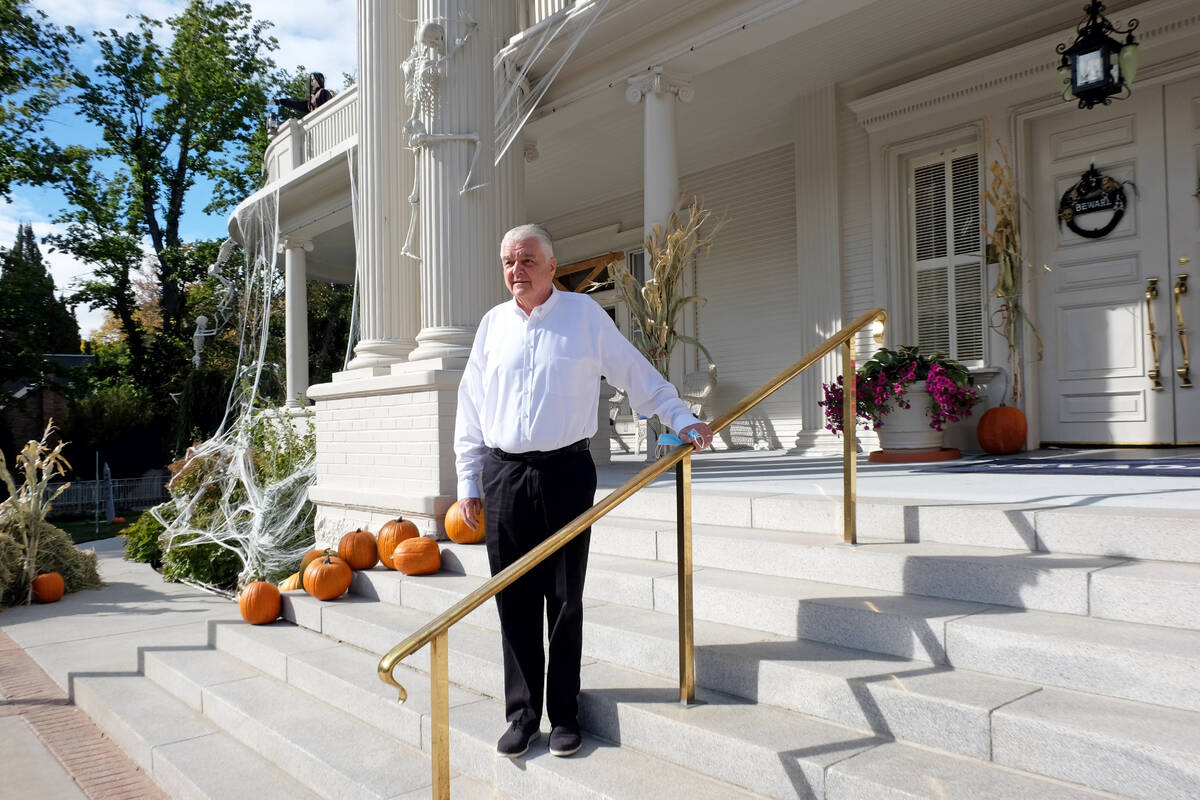 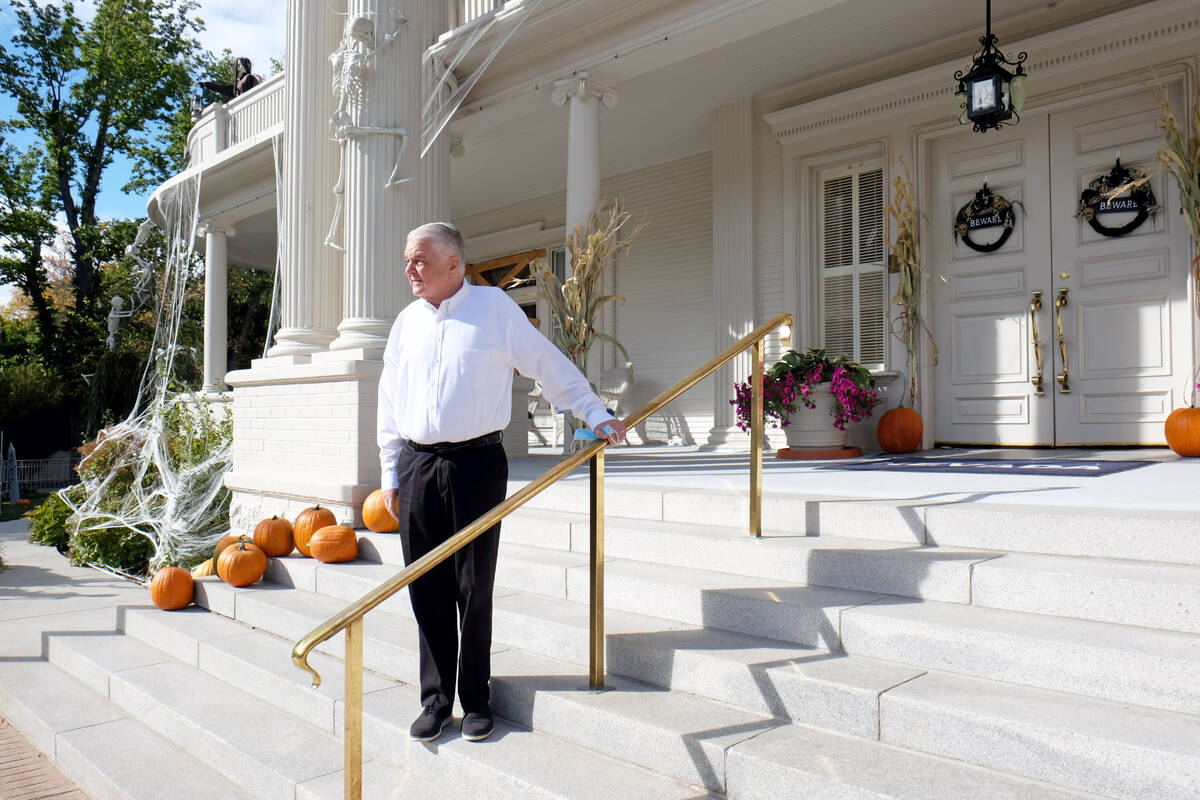 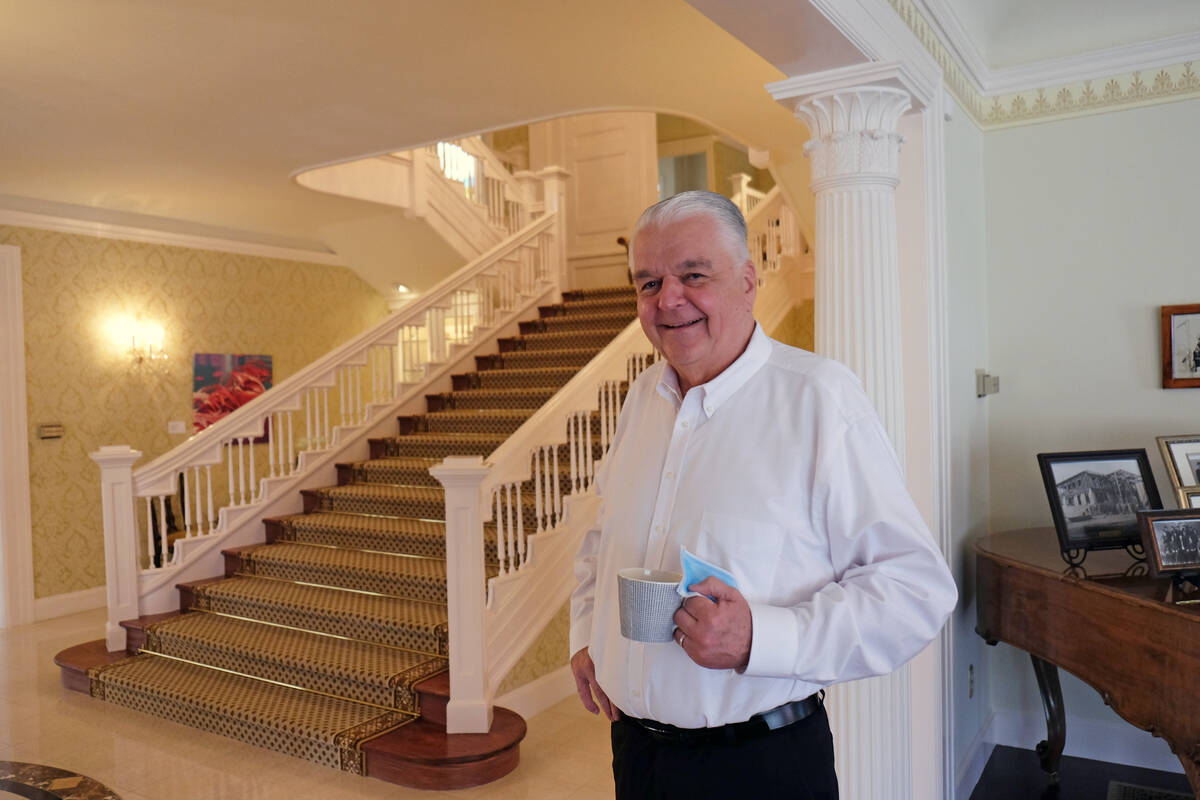 CARSON CITY — Like the premature autumn cold snap, election year politics has also arrived in Nevada’s capital early. Not even the Halloween decorations that festoon the governor’s mansion are above partisan reproach.

The seasonal décor, unchanged for at least a decade, prompted a resident’s complaint to local media this week that one dangling fake head looked too much like former President Donald Trump. Eager not to offend, staff at the mansion replaced it with a lantern.

The complaint doesn’t much surprise the mansion’s current resident, first-term Governor Steve Sisolak, a Democrat running for re-election next year. Nevada’s 2022 primaries might be still eight months off, the general election five months after that. But for all the activity the election is generating it could be right around the corner. Months ahead of the official filing period, some five Republicans already have lined up to challenge him.

“Between my race and (U.S.) Sen. (Catherine) Cortez Masto’s race, it’s going to be heated year in Nevada for politics,” the governor said in an interview Wednesday.

The remark might wind up an understatement. The governor’s race will surf pent-up voter sentiment from the economic, political and social upheaval brought on nationally by a deadly pandemic, not to mention clashes over police conduct and voting rights, a presidential race undermined by falsehoods, and an unprecedented assault on the seat of national government by an armed mob.

Central to his re-election will be how voters rate his handling of the coronavirus outbreak. Sisolak shut down the state in mid-March 2020 as the pandemic took hold, ordering businesses to close and putting other restrictions in place to slow the spread of disease. It will be “up to the voters to decide what kind of job we did on COVID,” he says.

“The naysayers are loud. I don’t know how many of them there are. But I’ve never focused any decisions that I’ve made as relates to COVID on re-election,” Sisolak said. “They were strictly based on science and medical advice that I was given by my medical advisory team. And that’s what I use to make my decisions.”

Nineteen months into the pandemic, fighting COVID remains his primary day-to-day focus, the governor said, with the disease’s metrics still increasing in parts of the state. His decisions have not been popular, with residents and political opponents alike attacking him for ordering closures that led to widespread layoffs and other economic impacts.

“I’m used to the criticism myself. I’ve been in politics a long time,” he said. “But when it flows over to my family, I take exception to that. My wife got attacked for being a Chinese American. My daughter, one of them, had a death threat. The other one had a protest outside of her house.”

He adds: “When I put my head down on my pillow at night, I know that I did the best job I possibly can. And I know that there’s not a doubt in my mind that the actions that we have taken since March of 2020 have saved a lot of lives.”

He declines to criticize Republican governors in other states, such as Texas Gov. Greg Abbott and Florida Gov. Ron DeSantis, who have taken a different tack with COVID, going so far as to bar vaccine mandates in their states. But he notes that those and other governors “were on the same White House calls that I was on.”

“I understand they make the argument about freedom and what-not, but my whole premise has been keeping people alive,” he adds. “I’ve thought about this a lot, but I don’t know why and how this became so politicized. Testing was politicized. Wearing masks is politicized, social distancing, capacity and restaurants is politicized. It shouldn’t be that way. I mean, we should all care about each other. And unfortunately, we have seen, in my opinion, the best of people and the worst of people during the pandemic.”

“They’re not running against me yet, but they are talking like they’re running against me,” Sisolak said. The candidates “focus all on everything that I’ve done and I haven’t done, and I get criticized every day for that. None of them have any good ideas in terms of what they would have done differently than I did.”

He added later: “I think what they have to do is differentiate themselves from each other, which I’m not seeing. Running against me is not enough, in my opinion, to win an election. They’re going to have to have a plan moving forward. I don’t know what that plan is. Right now the plan is to criticize how I’m doing things, but at some point, to gain more votes they have to say I’m better than this one.”

The governor is coming off the recent demise of a policy initiative he threw his full weight behind this year – Innovation Zones, under which tech-related companies could have carved out county-like governments in rural areas. The proposal failed to win any meaningful support in the Legislature this year, and at the end of September, the company behind the plan surrendered and withdrew the idea, criticizing the governor in the process.

“No, innovation zones was not a mistake. It didn’t work out,” the governor said, noting the lack of business diversity in the state. “This was an idea that was brought to me that was potentially tens of thousands of jobs, could provide affordable housing, and could provide a future for an awful lot of people in Northern Nevada on some undeveloped land. I’m willing to sit down and talk to them, I wish it would have gotten more vetting. It didn’t, it didn’t get any traction, it didn’t get anybody buying into the project, and the developer backed away from it. And I understand it’s his money, it’s his land, he gets to do whatever he wants to do. But I think the idea of attempting to diversify our economy and listen to ideas is a good thing.”

“I was hopeful that there would be more collegiality in the Legislature than existed,” the governor said. Citing legislative term limits, he said the state “lost a lot of people that understood issues and that understood the process, and that worked across the aisle.” The Legislature, he said, has become “very, very partisan,” and the division contributed to Innovations Zones falling flat in rural areas where Republicans predominate. (The plan was opposed by legislative Republicans and county leaders in rural Storey County.)

Sisolak says a second term will focus on rebuilding the economy and increasing employment in a state that has “lost a lot of jobs.” The state’s unemployment rate remains stubbornly atop the nation’s and “a lot of those jobs are never coming back,” especially in the hospitality sector.

“We need to train workers into another field,” he said, building back the job base in small but steady increments. “There are not many things that come along like what happened in Northern Nevada with Tesla or Panasonic or Switch that are thousands of jobs,” he said. “That just doesn’t happen. You’ve got to do it 50 jobs, 100 jobs, 20 jobs at a time. And that’s what we’re doing.”

Sisolak says he still rises at 4 a.m. daily, spends an hour walking on a treadmill, and is in good health. A devout Catholic, he says his faith guides his toughest decisions.

“I get down on my knees every morning and say my prayers. It’s an important part of my life and who I am. During the toughest times of this pandemic, I probably prayed more to make decisions that you know are going to be unpopular. I know when I make the decisions that 50 percent of people aren’t going to like it, but 50 percent are. But in my heart, I know that it’s the right thing to do. And I put a lot of faith in God to advise me, to give me some direction in that regard.”

Asked about making his case for re-election, he says the state is “closer to the end than we are to the beginning” of the pandemic emergency, but that the future is unpredictable. The economy, he said, is rebounding “very, very quickly.” He cites monthly gaming wins that are approaching all-time highs and says he’s “confident that our economy is going to be a lot better in six months, a year, than it is now.”

He cites passage this year of education funding “at a level higher than it’s ever been funded before,” with a late-session compromise that imposed higher taxes on the state’s mining industry, and a continued emphasis on diversifying the state’s economy, including efforts to make it a hub for power transmission and and renewable energy production.

“Whether it’s an economic downturn, whether it’s a natural disaster, whether it’s a shooting in Las Vegas, that, you know, shut down the Strip for a while, whether it’s a pandemic, a lot of things have happened in my life that have negatively impacted gaming,” he said. “We need to do what we can to diversify away from just a single industry. And I think we’re sending a message that we’re doing that.”