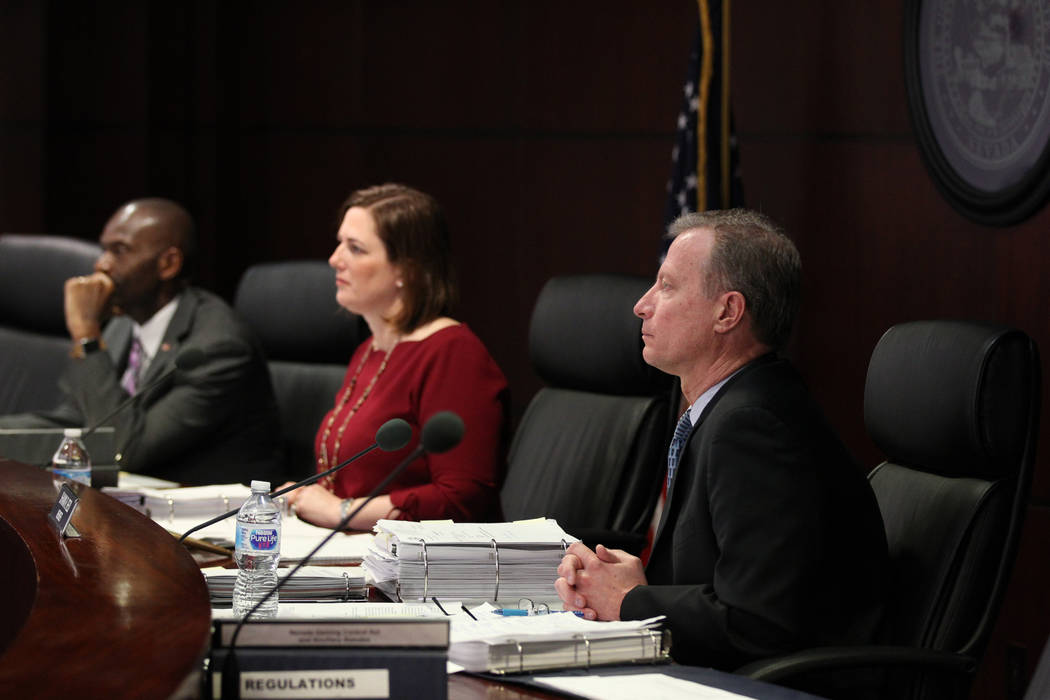 Gaming Control Board members, from left, Terry Johnson, chairwoman Becky Harris and Shawn Reid listen to testimony from Alex Meruelo who was requisition a gaming license transfer for the SLS in the Sawyer Building in Las Vegas Wednesday, March 7, 2018. The board unanimously recommended approval of the transfer of the SLS gaming license. K.M. Cannon Las Vegas Review-Journal @KMCannonPhoto

When Steve Sisolak takes over as governor next month, he’ll have two important gaming regulatory appointments to quickly make.

The terms of two of the three Nevada Gaming Control Board members end Jan. 27.

Sisolak will have less than a month to contemplate who he wants to guide the state’s gaming licensing, taxation, audits, investigations and enforcement oversight.

Sisolak only recently announced the members of his transition team and hasn’t begun lining up appointments.

The board members whose terms are ending are Chairwoman Becky Harris, a former state senator appointed in January, and Shawn Reid, who has worked with the Control Board since 1990.

Harris was appointed by Gov. Brian Sandoval to complete the term of A.G. Burnett, who unexpectedly stepped down to enter the private sector.

She took over days before a sexual harassment tsunami hit Wynn Resorts Ltd. and learned on the job. Out of the turmoil, Harris helped craft a series of proposed regulations that, if approved, will require every licensee to check in annually with the board on harassment topics.

It will be up to the Gaming Commission to consider the Control Board’s recommendations.

Harris appears to be a likely option for reappointment.

“I am retiring from state service,” Reid said.

Twenty of those years have been in the Control Board’s Investigations Division.

Reid said he hasn’t officially notified Sisolak of his plans.

“I plan to reach out to him; I figured he was pretty busy,” Reid said.

“I’m pretty sure he already knows because I’m sure he’s got the appointment list.”

The third member of the Control Board, Las Vegan Terry Johnson, isn’t up for reappointment until 2021 after taking office in November 2012 and being reappointed.

State statutes require that one member of the board have experience in the fields of investigation, law enforcement, law or gaming — Reid’s role.

Another member must be an accountant having at least five years of experience in general accounting and knowledge of the principles and practices of corporate finance.

Because Johnson and Harris reside in Southern Nevada, it’s likely Reid’s successor will be from Northern Nevada. Governors have tended to consider geographic diversity for the board.

On the other half of Nevada’s two-tiered regulatory system, the Nevada Gaming Commission won’t have an opening until April.

The term of former U.S. District Court Judge Philip Pro, who was appointed to the commission by Sandoval in 2015, is up April 27.

When the time comes to consider Pro’s seat, Sisolak, a Democrat, won’t be allowed to select someone from his own party to fill the position.

State statutes say that “not more than three members of the commission shall be of the same major political affiliation.”

Pro is nonpartisan, while Chairman Tony Alamo, whose term is up in April 2020, is a Republican.

John Moran Jr., the longest-serving regulator on either board — having been appointed by Gov. Kenny Guinn in 2004 — and Reno resident Deborah Fuetsch, both up in April 2021, are Democrats, as is the commission’s newest member, Sandra Morgan, who replaced Randolph Townsend this year and is up in 2022.