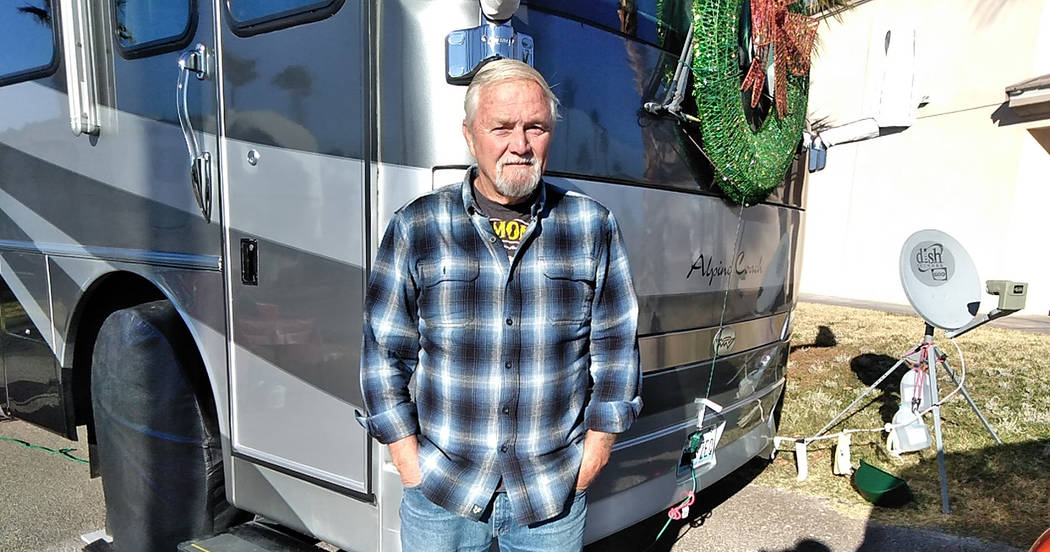 Selwyn Harris/Pahrump Valley Times Retiree Glen Hansen traveled down to Pahrump from Tacoma Washington to enjoy the mild southwest temperatures. Hansen said at present, the temperatures back home home is somewhere between 20-to-35 degrees. He and his wife Beverly enjoy exploring nearby locales such as Las Vegas and parts of Death Valley. 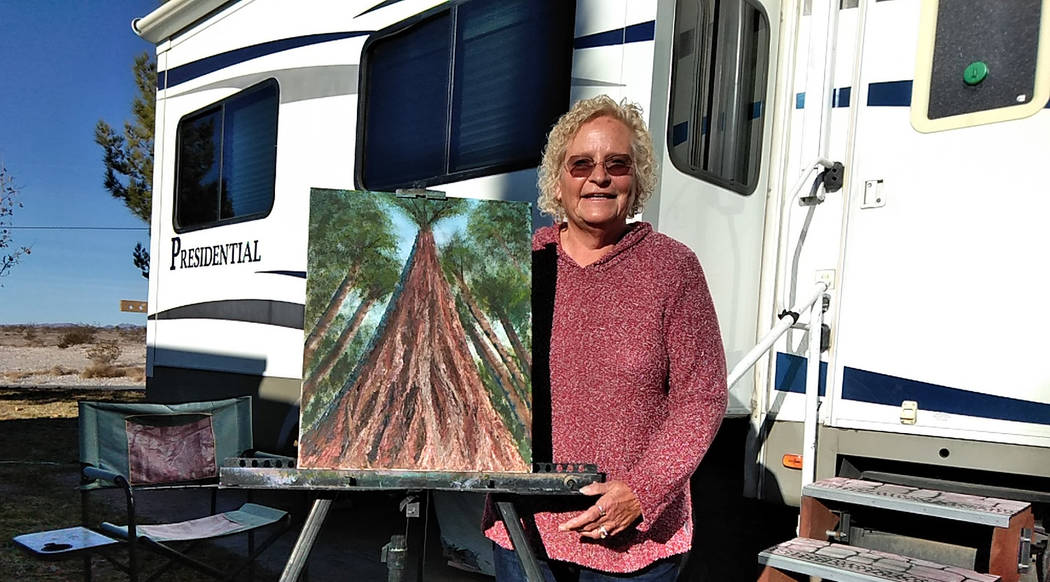 Selwyn Harris/Pahrump Valley Times Sandee Claypool and her husband Paul have made the journey to Pahrump's Best Western RV park, from Linesville, Pennsylvania for 11 consecutive years. While her hobby is oil painting, Claypool said her husband enjoys hitting the links at local golf courses. 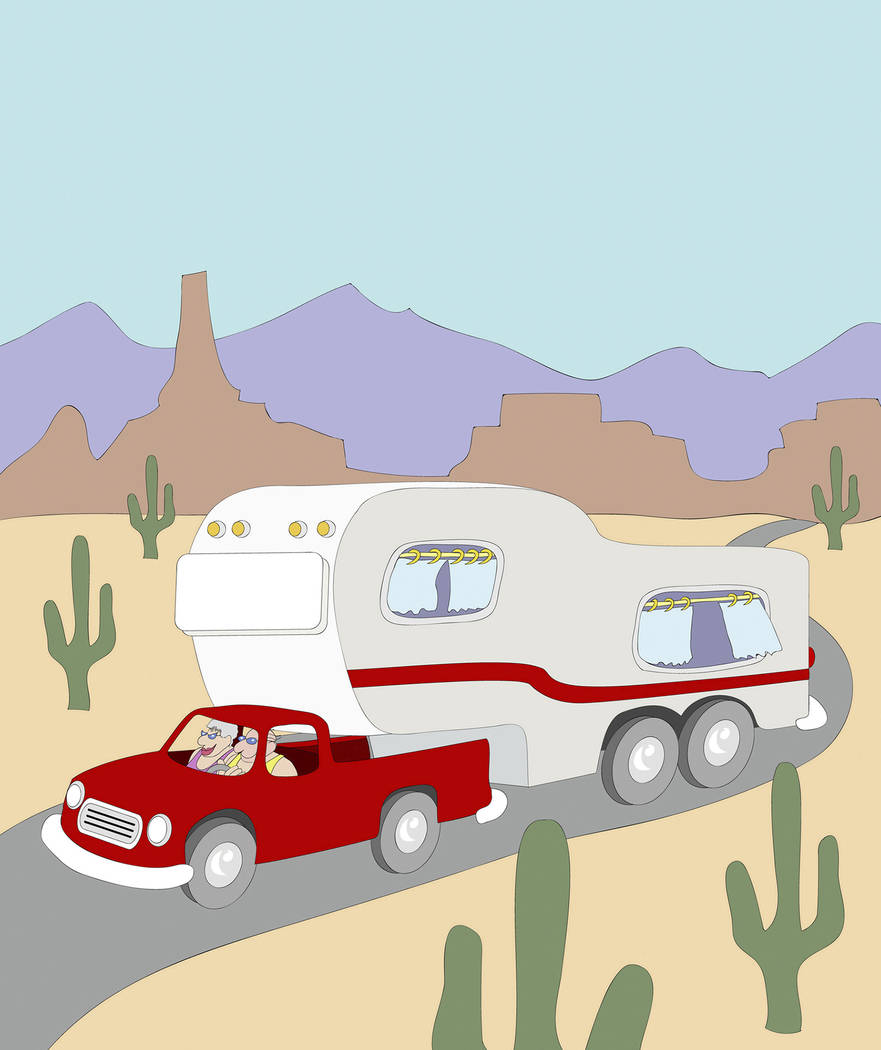 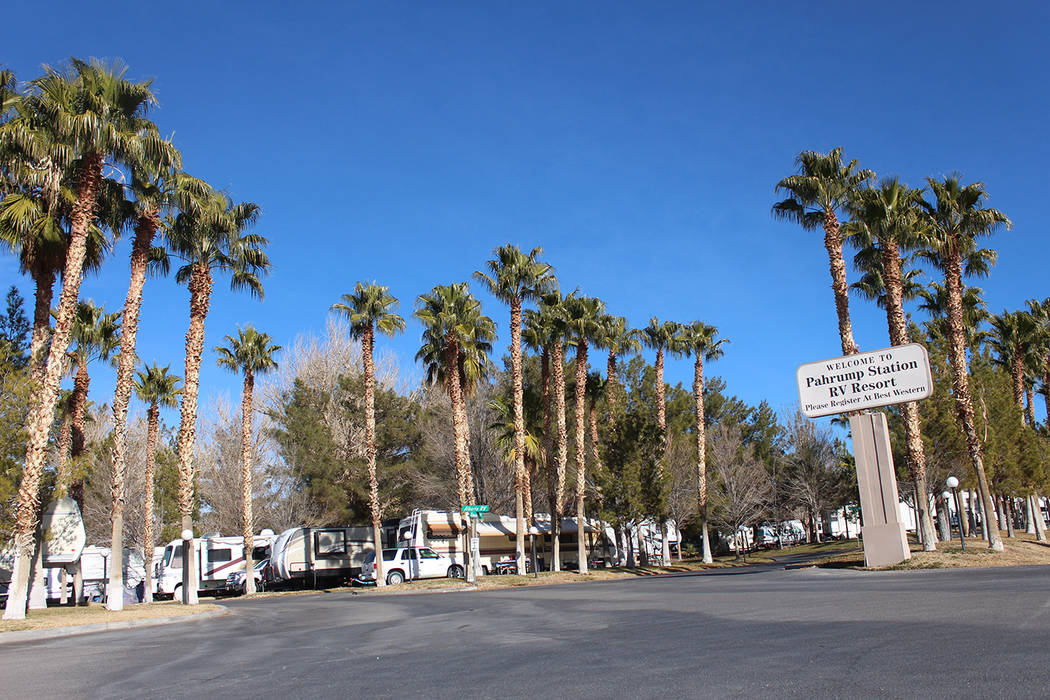 Perhaps by now, many longtime Pahrump residents are familiar with the term “snowbirds.”

Unlike the 1970 hit pop song by singer Anne Murray, or the literal feathered species with wings, the term also describes individuals and families who regularly travel from colder climates of the United States in late fall, to warmer locales such as Arizona, California, and Nevada, to name a few.

The journey is reminiscent of the swallows, returning to the San Juan Capistrano Mission in California, every March 19.

It should be noted that winter officially began on Friday, Dec. 21.

It just so happens, the town of Pahrump is a perennial hot spot for snowbirds, as evidenced by the increase of motorists on area roadways, and especially local RV parks in town.

One such RV park is behind the Best Western, near Highway 160, where Glen and Beverly Hansen are residing at present.

Both traveled down from Tacoma, Washington in their 36-foot Alpine coach.

Glen Hansen is now retired after working for the Cummings engine company for 29 years.

“We normally arrive in Pahrump in October to beat the snow up in Washington,” Hansen said while lounging on a picnic table. “We normally stay until about April. We really like the community of Pahrump. We have several friends up in Washington who actually own homes out here. Right now the weather back home is probably between 20 and 35 degrees, and they are having winter storm warnings as of this week. Right now, the weather here would be considered almost like a summer day in Washington.”

During the Hansen’s southwestern sojourn, the couple enjoys exploring nearby locales such as Las Vegas and parts of Death Valley.

“We really love the weather and activities,” Hansen said. “We bring our car with us and go to a lot of car shows and into Las Vegas. We also visit Death Valley. In fact, I wish they would reopen Furnace Creek. I think they had the best fish and chips in the state of Nevada, but they tore it all down to renovate it. It’s been over a year, but it’s still not back up.”

Hansen also said he and his wife once considered making Pahrump their permanent home.

“If we had known what we got into, we would definitely have done it,” he said. “But as much money as I spent for this motorhome, which I bought used, I could have purchased a real nice house here.”

Pahrump aside, the Hansens considered spending the winter in the Golden State.

“We did a lot of research online before we came down and it’s far more expensive in California,” he said. “We had thought about Mesquite because we did a car show out there. (This) month, we are going there for three days. I think Mesquite is quite similar to Pahrump because the weather is almost identical.”

Just yards from the Hansens’ RV space is where Paul and Sandee Claypool’s temporary home sits.

Like the Hansens, the couple arrived in Pahrump back in October from Pennsylvania.

It’s their 11th consecutive yearly visit to the Best Western’s RV park from the Northeast.

“We live in a little town called Linesville, where the ducks walk on the fish and that’s what we are known for,” Sandee Claypool said. “Here in Pahrump, the people are great, the scenery is to die for, and I feel safer, compared to Las Vegas. We go into Las Vegas only when we have to. We love Death Valley, and especially Ash Meadows. We also like to visit Shoshone and Beatty, but we make Pahrump our base camp.”

Claypool also noted that she and her husband learned about Pahrump simply by chance.

“We chose to come to Pahrump each year after we went on our trip of a lifetime,” she said. “We were staying at as many national parks as we could. One day we stopped in Pahrump because we wanted to see Death Valley. We just fell in love with this town 11 years ago. We arrived here October 9th, and we leave in April. We still have our home in Pennsylvania.”

Additionally, Claypool spoke about the weather conditions in Pennsylvania each winter.

“We get the lake-effect snow,” she said. “We could have two to three feet of snow coming off of Lake Erie, and we’ve had enough of that to last us a lifetime. The weather is so beautiful down here. It’s mid-December and I’m sweating. It’s very warm today.”

During their roughly five-month visit, the couple constantly remains active with their own respective interests.

“I do oil paintings,” she said. “It’s just something I really like to do out here in the beautiful weather. My husband golfs every day at Lakeview Executive Golf Course. While he is golfing, I am painting. We are both retired. My husband was a plumber, fitter and welder out of the union. We once owned a campground in Pennsylvania before I retired. The community here has made us feel very welcome every year.”

“That’s still up in the air,” she pondered. “We loved it when Wulfy’s was here. Mr. Wulfenstein was a great man and we still miss him to this day. I really love Pahrump, and we even bought our fifth-wheel here from the RV Superstore. We plan to come back again next fall, God willing. We have a son who lives in Clearwater, Florida, but we came here instead because there’s no hurricanes out here and not a lot of bugs. Unlike Florida, we don’t really have the humidity here, and there’s no geckos.”

As temporary residents, Pahrump’s Tourism Director, Arlette Ledbetter said that each year, the snowbirds provide a much-needed “shot in the arm” to the local economy.

“Especially in the months of September through November and February through May,” Ledbetter noted. “Our RV resort occupancy tends to increase about 30 to 40 percent during those peak months. They have quite an economic impact on all businesses in Pahrump, from the service industries to medical facilities.”