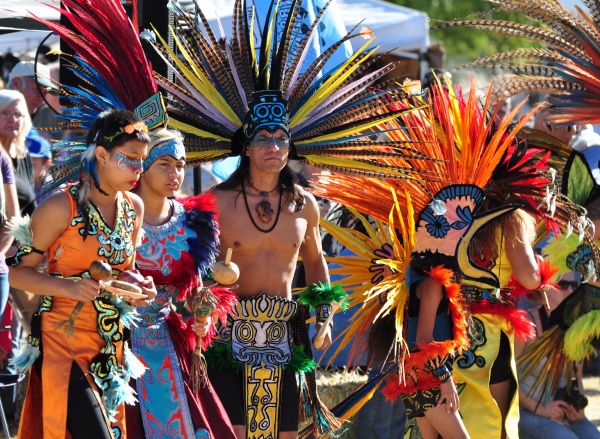 Native Americans from tribes throughout the Southwest will converge on Petrack Park beginning today as the 17th annual Pahrump Inter-Tribal Social Powwow returns to town.

The popular event attracts many local residents, as well as those from other areas, to learn about the Native American heritage and traditions expressed through stories and dance.

“We are really excited this year because we have a champion fancy dancer coming in from Arizona and he will be doing some demonstration dancing,” she said. “He’s also a flute player so we will have the pleasure of listening to him play his flute.”

Per tradition, Elefante said the powwow begins with what’s known as the Grand Entry, where all spectators are asked to rise as the visiting tribes are brought in.

While the full event starts Saturday, people are welcome to come by Friday while the event is set up.

Additionally, Elefante said there are certain rules of protocol for the entry that tribes must follow.

“The lineup for the dancers is always the elders first, the elder gentleman and the older ladies,” she said. “Then come the adult men and adult ladies, followed by the junior boys and girls. The tiny tots, which are kids under the age of five, then follow.”

During the three-day event, Elefante said the protocol also extends to attendees.

Photographing dancers while they’re not performing is not desirable, nor is walking across the dancer’s circle.

Consumption of alcohol during the event is prohibited as are carrying firearms.

“You should also ask permission from the dancers if you want to take a photograph of them,” she said. “We ask people not to sit on the blankets if they see one, but there will be a couple of blankets for some of the dancers where people can put a dollar on it or whatever they can afford. It will go toward their cost of getting here. I have a list of etiquette that will be at the powwow booth where people can pick it up.”

Additionally, Native American drummers will perform throughout the weekend, including the Northern Drum Plenty-Wolf Singers and the Southern Drum Hummingbird Singers.

“The northern drum this year is coming in from Denver, Colorado and last year they received the Group of the Year award at the Native American Music Awards, which is kind of like the Grammys for Native American music,” she said. “With the southern drum, we will have the Hummingbird Singers and they are coming back this year from Sacramento, California.”

Aside from the performances, authentic Native American food will be provided by several of the 30-plus vendors at the park, where items such as Indian tacos and fried bread will be on the menu.

In addition, attendees will find crafters and artisans, with hand-created items.

“Vendors from different tribes will sell items such as pottery, Navajo jewelry, Kachina dolls and much more,” she said. “They all come in from different areas. The powwow is a great time to start holiday shopping because we have our jewelry, which is handmade silver pieces, pottery, and much more.”

“We can’t tell people that we will be there until 9 p.m. at night and have absolutely nobody in the park because it’s 32 degrees out there, which has happened to us before.”

Elefante got a break on the fees at Petrack Park for the event, as county commissioners agreed to take 50 percent off of the $500 fee for three days, as the powwow is a nonprofit organization.