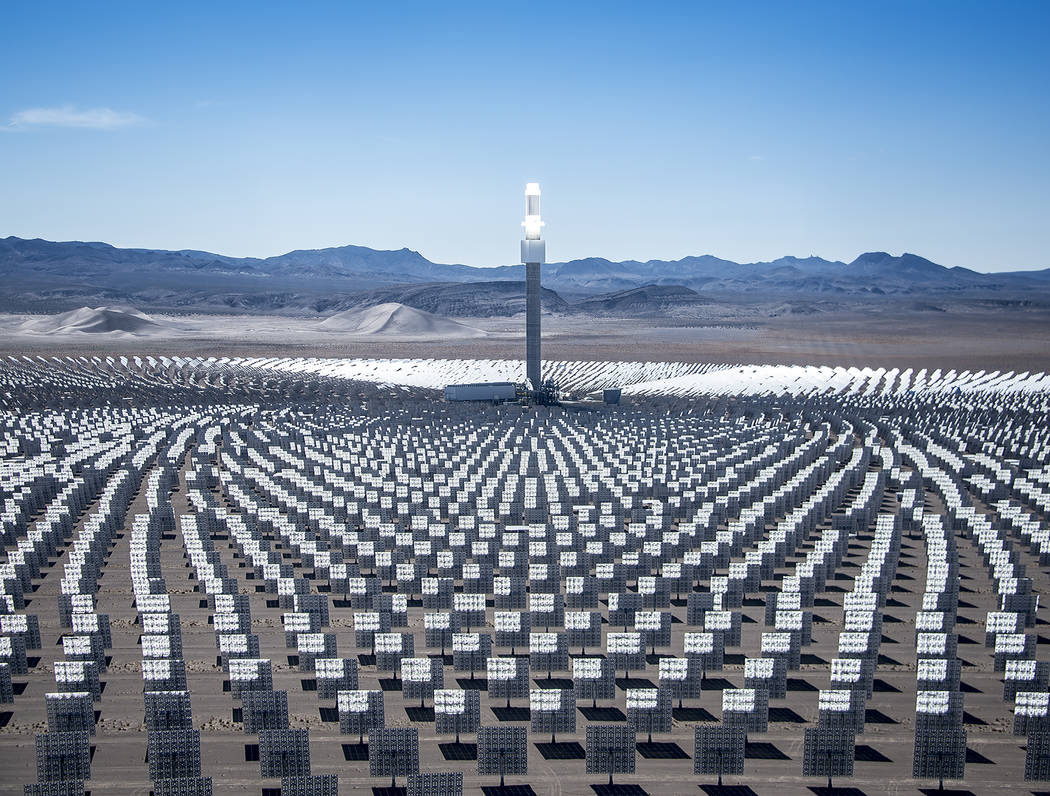 Special to the Pahrump Valley Times SolarReserve, the parent of Crescent Dunes Solar Energy Project near Tonopah announced in a press release on Aug. 14 that it signed a long-term Generation Project Agreement to build a 150-megawatt solar thermal power station with 8 hours of energy storage near the town of Port Augusta in South Australia. SolarReserve said it plans to utilize the technology from Crescent Dunes for its new project in South Australia.

With the Crescent Dunes Solar Energy Project back online in Nye County, SolarReserve is getting ready to utilize the same technology in its new venture in South Australia.

The news about Crescent Dunes’ eight-month shutdown, which ended in July, made headlines in some Australian media outlets last week. Advertiser.com.au, a news outlet in South Australia, recently reported that the state government was aware of the eight-month outage at Crescent Dunes and was backing the Aurora Solar Energy Project.

“Shutdown of SolarReserve solar plant in US prompts questions over plan for similar facility in SA” (South Australia),” one headline read.

“But the State Government is confident it will not experience problems here,” The Advertiser story added.

In a news release on Aug. 14, SolarReserve announced that it signed a long-term Generation Project Agreement to build a 150-megawatt solar thermal power station with eight hours of energy storage near the town of Port Augusta in South Australia.

The SolarReserve agreement was signed at the Aug. 14 ceremony with South Australia Premier Jay Weatherill and Energy Minister Tom Koutsantonis.

Mary Grikas, spokeswoman for SolarReserve, said that the basic technology is the same, but SolarReserve made significant advances over the last several years on the technology. Those will be incorporated into the Port Augusta project – as well as SolarReserve’s other projects around the globe, including Chile, South Africa, China, and the Middle East, she said.

“With our continued research and development, we keep innovating and gaining real world know-how that led to advancements toward higher efficiency, reliability and performance, while simultaneously reducing capital cost. This is key in maintaining an edge on our competitors in China, Israel, and Spain,” Grikas said.

Grikas said that there are “absolutely no concerns” regarding the recent eight-month outage at Crescent Dunes as it relates to the company’s new project in Port Augusta.

“The outage was due to a leak in one of the salt tanks which was a construction execution issue unrelated to the technology or the design of the plant, and was repaired with measures taken to mitigate reocurrence,” Grikas said.

“As we have identified earlier, the leak in the hot salt tank was a construction defect which was unrelated to the technology or the design of the plant,” Grikas said. “This will be avoided in future projects through more diligent quality assurance and inspection of construction practices.”

Grikas said that the “real story” is that SolarReserve is a relatively young American renewable energy company with a “groundbreaking technology,” that is trying to make a difference by reducing carbon emissions and helping local economies.

The solar thermal energy storage technology used in Crescent Dunes was invented in the U.S. with the help of the space industry, and SolarReserve is the only U.S. supplier of this type of technology – concentrating solar power with molten salt energy storage.

“Our U.S.-developed technology continues to be the leading solar thermal energy storage technology worldwide, and we are looking to increase U.S. manufacturing jobs through the export of this technology,” Grikas said. “Our competitors are trying to unseat us for projects around the globe.”

It hasn’t been an uphill climb for SolarReserve, since the company was established in 2008, Grikas said.

“It’s not easy to deploy new technologies at full scale, but we’ve done it – thanks to a team of dedicated people who have worked hard to accomplish our common goals and help preserve our planet,” Grikas said. “It’s also not easy to compete with larger global companies, some of which haven’t even built a pilot project yet, but profess to have similar technology, but we’re doing that, too.”

With 1,100-megawatt-hours of energy storage capability, the Aurora is set to be the largest project of its kind in the world, and will meet the South Australian government’s annual electricity consumption, according to the SolarReserve’s news release.

SolarReserve said that the Generation Project Agreement signed on Aug. 14 is similar to a Power Purchase Agreement that Crescent Dunes Solar Energy Plant currently has with its sole customer, NV Energy. In the Generation Project Agreement, the emphasis is placed on the available capacity of the facility during peak demand periods rather than just the energy that can be delivered in kilowatt-hours.

The company currently has seven international offices including the one in Perth, Australia and plans to open its permanent Australian headquarters in Adelaide by the end of 2017.