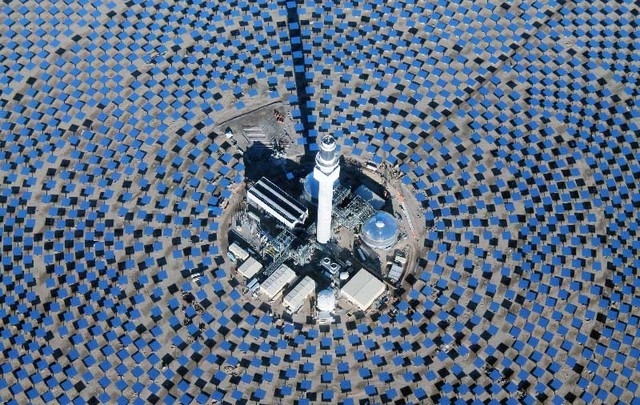 SolarReserve’s Crescent Dunes Solar Energy Project in Tonopah has reached a major milestone by entering the plant commissioning phase, when the project will be brought into full operating condition and will include performance testing and measurement.

The one-of-a-kind technology will generate more than 500,000 megawatt-hours per year, enough to power 75,000 homes during peak electricity periods. NV Energy, which serves northern Nye County, will purchase 100 percent of the electricity generated, under a 25-year power purchase agreement.

The storage technology also eliminates the need for any backup fossil fuels. Full commercial operation is scheduled for late 2014, assuming all the milestones are met. The number of employees at Crescent Dunes would indicate great attention is being paid to the details.

A SolarReserve spokesperson said, “There have typically been between 750 to 900 workers on site over the last month depending on what activities are ongoing. This week has been closer to 900 workers.”

Those numbers will decline rapidly when construction is complete. “Construction has been going on for more than two years, but will be largely complete in the April/May time frame. At that time the construction workforce will start to decline, but we will still employ a sizable workforce to take us through the commissioning phase. When commissioning is completed toward the end of 2014 and Crescent Dunes is fully operational, the permanent team of about 40 workers will take it from there.”

Commissioning is the initial stage of bringing the project into operations with system-by-system verification and startup, as well as equipment calibration and testing. Activities underway at Crescent Dunes include energization of the utility interconnection system and other electrical systems, as well as the first stages of testing and calibration of the heliostat field.

Unlike traditional power plants, commissioning includes systems unique to Crescent Dunes such as a Heliostat Field Control System that will control and concentrate the sun’s energy and also the Molten Salt System that will harness, store and transform the sun’s energy into superheated steam. The facility also includes a dry-cooled condenser in a hybrid configuration to minimize water use to levels well below that of conventional power plants.

A press release stated, “The key aspects of commissioning are clearly the new technology portion which includes the molten salt receiver that sits on top of the tower and the molten salt storage system which will provide 10 hours of full-load energy storage. Additionally the large heliostat field, including the 10,000 billboard sized mirrors, needs to be commissioned with the control system on each heliostat system calibrated to verify proper tracking and aiming of the solar beam on the receiver.

“Start of commissioning of the Crescent Dunes solar power plant marks a critical milestone for the project as well as the solar industry. We are now able to build utility-scale power plants, fueled only by the sun, which operate on-demand, day and night, just like traditional fossil fuel or nuclear power plants,” said SolarReserve’s CEO Kevin Smith. “SolarReserve’s industry-leading solar thermal energy storage technology solves the intermittency issue that limits the use of other renewable energy projects and thus enables firm, reliable delivery of electricity whether or not the sun is shining or the wind is blowing.”

The Crescent Dunes plant is the showcase for SolarReserve’s game-changing energy storage technology — a realistic solar energy solution that operates without the harmful emissions or hazardous wastes associated those traditional plants. Additionally, Crescent Dunes includes the capability to dry cool the steam cycle, an environmentally friendly low water use feature that will saves millions of gallons of water each year. Once operational, the 110 MW Crescent Dunes plant will be the world’s largest solar thermal plant with fully integrated energy storage.

SolarReserve is joined as investors in the project by ACS Cobra, a worldwide leader in the engineering and construction of power plants and thermal solar facilities, and the equity capital practice of Santander, a global financial services and banking leader. ACS Cobra’s Nevada-based affiliate, Cobra Thermosolar Plants Inc., is constructing the facility as the general contractor while utilizing Nevada and regional subcontractors to perform the work.

The project also closed on $737 million in project debt along with a loan guarantee from the U.S. Department of Energy as part of the overall project financing that was completed in the fall of 2011.

In addition to the Crescent Dunes CSP project, SolarReserve has three photovoltaic projects, totaling 246 MW of generation capacity, in construction in South Africa. The Letsatsi and Lesedi power projects, each 75 MW in size, were selected as the “African Renewable Energy Deal of the Year” by Project Finance Magazine in 2012. The three projects have a combined capital cost of more than $820 million and are all slated for commercial operation in 2014.