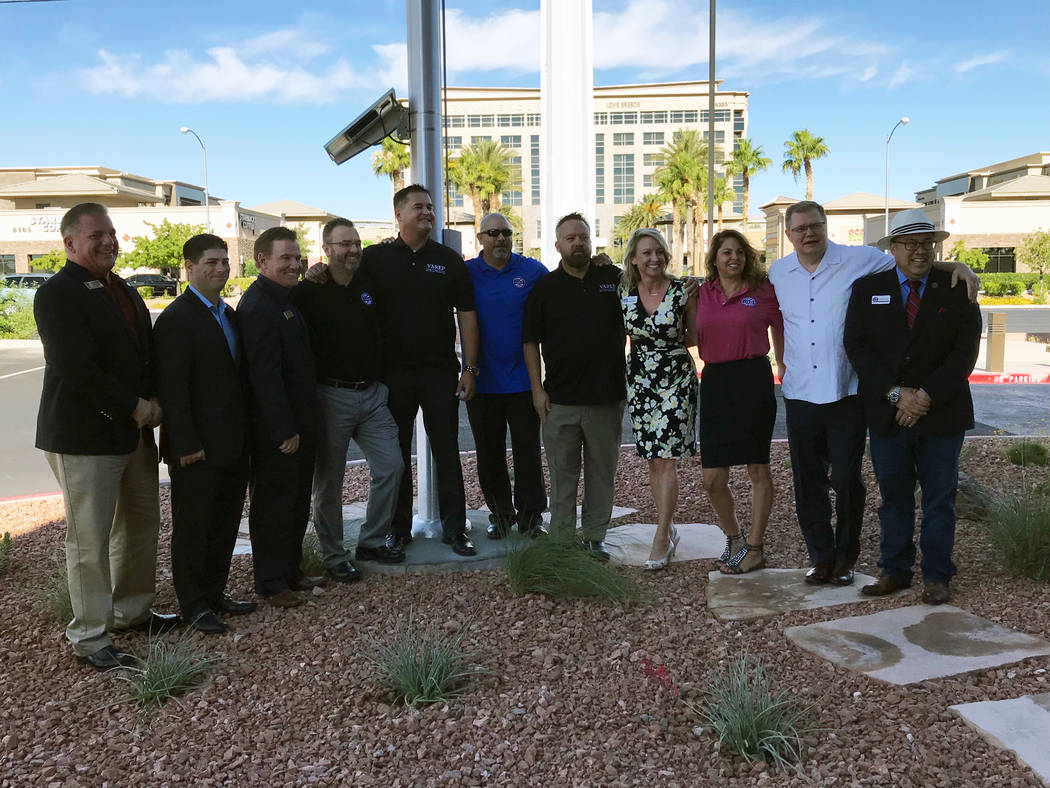 Jeffrey Meehan/Pahrump Valley Times Two Southern Nevada real estate organizations gathered for an inaugural flag raising at the new headquarters of the Greater Las Vegas Association of Realtors at 6360 S. Rainbow Blvd. in Las Vegas at the end of June. GLVAR, which has over 14,000 members in Southern Nevada, including in Pahrump and Las Vegas, moved to its newly built location at the end April. 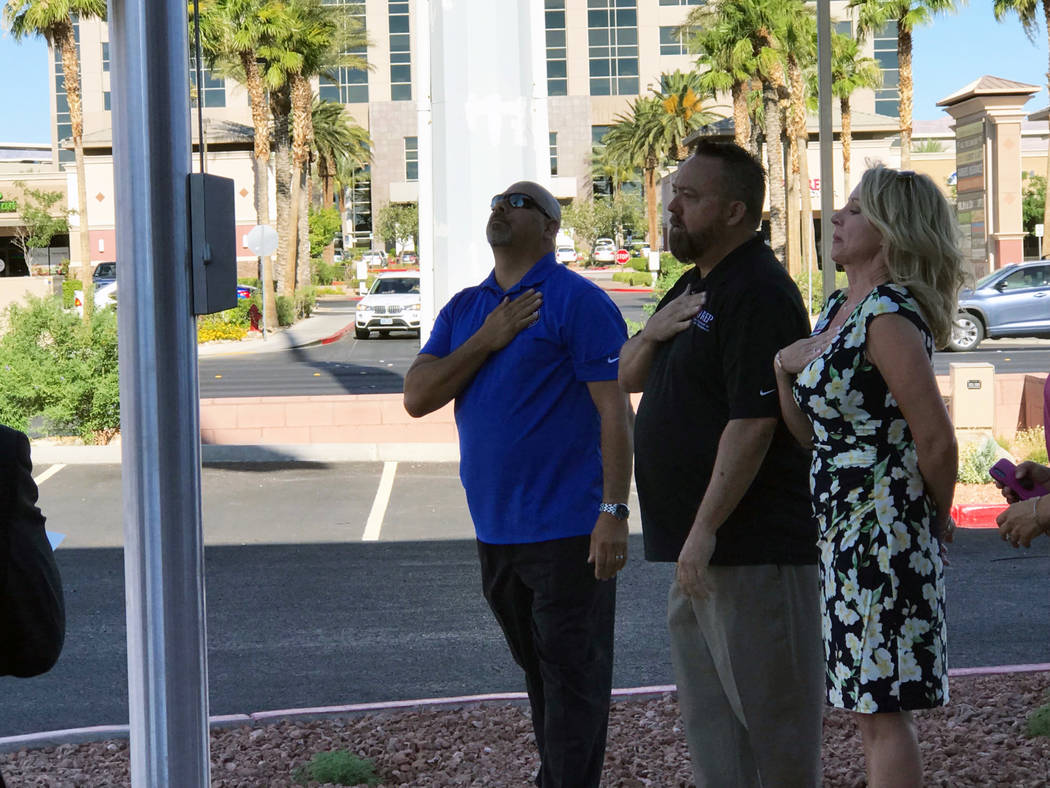 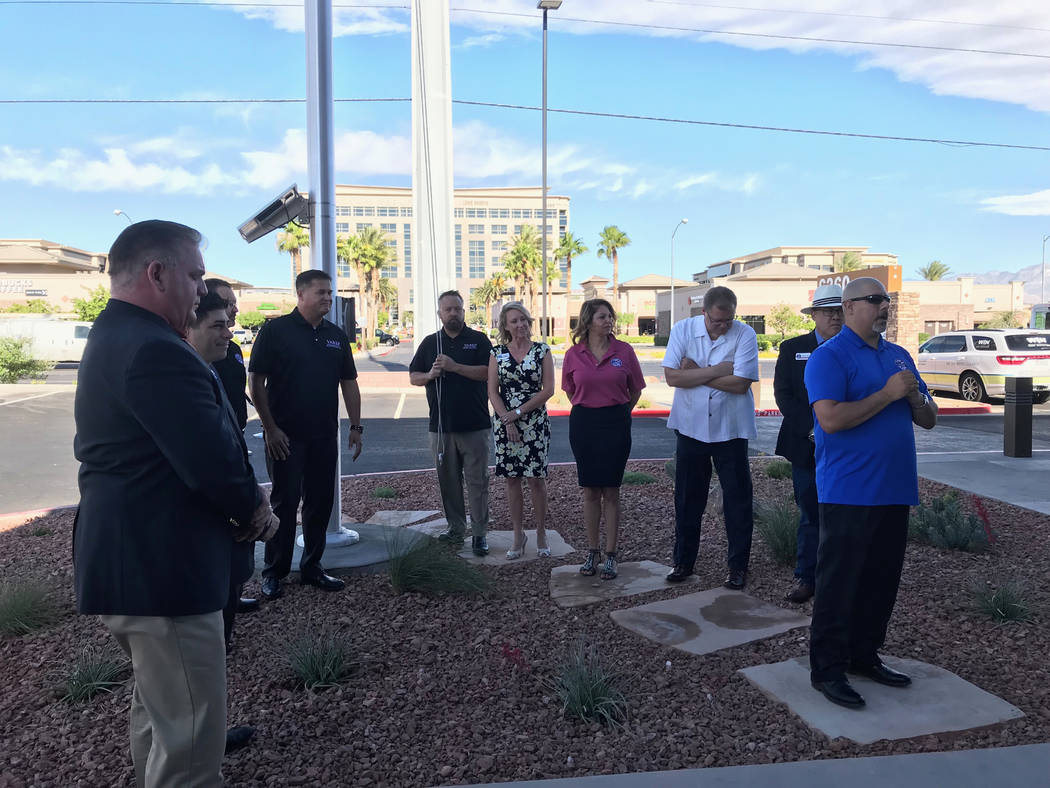 Jeffrey Meehan/Pahrump Valley Times Ernie Gonzales, president of the Veterans Assocation of Real Estate Professionals in Las Vegas, (front-right) led the raising of the flag at GLVAR’s South Rainbow campus at the end of June. GLVAR has more than 14,000 members in Southern Nevada, including in Pahrump and Las Vegas. 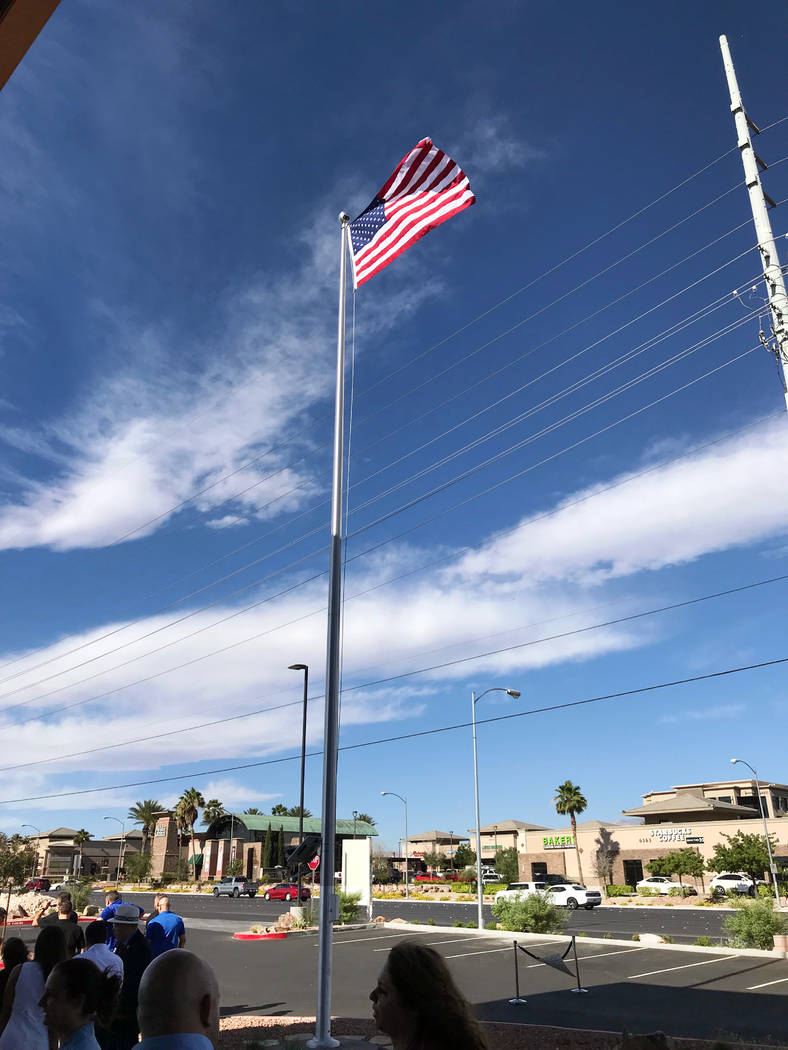 Jeffrey Meehan/Pahrump Valley Times The American flag flies in from of the Greater Las Vegas Association of Realtors headquarters at 6360 S. Rainbow Blvd. on June 28, 2018. The association, which has more then 14,000 members in Southern Nevada, including in Pahrump and Las Vegas, had its inaugural flag raising, as it moved to its new location in southwest Las Vegas at the end of April.

Members of multiple Southern Nevada real estate organizations, area Realtors and others gathered at the end of June to honor veterans in the area and those across the country.

Leadership at the Greater Las Vegas Association of Realtors (GLVAR) and of the Veterans Association of Real Estate Professionals (VAREP), realtors and others gathered for an inaugural flag raising at GLVAR’s new headquarters at 6360 S. Rainbow Blvd., between Sunset and Post roads on the southwest side of Las Vegas.

Gonzales led the raising of the flag at GLVAR’s South Rainbow campus. Gonzales was joined by over two dozen realtors, along with 2018 GLVAR president Chris Bishop, and others.

This is the inaugural flag raising at GLVAR’s new campus. The association was previously located at 1750 E. Sahara in Las Vegas and moved the southwest part of town at the end of April.

GLVAR has more than 14,000 members in Southern Nevada, including in Las Vegas and Pahrump. The association’s members are provided education, training and political representation as part of their membership.

The Veterans Association is a nonprofit organization approved by the U.S. Department of Housing and Urban Development as a counseling organization. The association is “dedicated to increasing sustainable homeownership, financial literacy education, VA loan awareness, and economic opportunity for the active-military and veteran communities,” according to information on the group’s website.