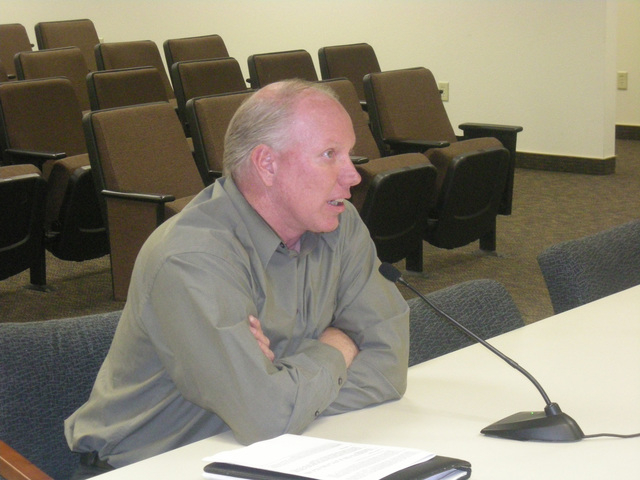 Spring Mountain Raceway will be rezoned from heavy industrial to a mixed use zone with a special projects overlay zone after Pahrump Regional Planning Commission approval Wednesday, to allow for a planned 77-lot subdivision, an RV park, condominium units, warehouses, stores, offices, more control towers, a racetrack expansion, even an aquatic park and zip lines.

Principal Planner Steve Osborne said the original racetrack was constructed on the property in 1998. Current owners acquired the property in 2004 and made extensive improvements, with more classroom space and garages. The racetrack was extended and a Cadillac training school and other improvements constructed after owners acquired another 120 acres from the U.S. Bureau of Land Management.

The industrial zone was appropriate for a racetrack, but not for all the planned improvements, Osborne said. He said a special projects overlay zone is used when there is a unique project that doesn’t entirely fit within an existing zoning district.

Spring Mountain Raceway Chief Executive Officer John Morris wrote the expansions will create 38 full-time positions at the track and 210 part-time construction jobs over five years. They will offer another 45 to 50 driving schools per week, increasing room bookings in Pahrump, he said.

RPC Chairman John Koenig objected to Morris’ plans for an artificial lake with park areas, beaches and aquatic activities for youth groups, maintained by the racetrack.

“We are not giving any sort of tentative or kind of approval to build a six-acre or bigger lake, is that correct?” Koenig asked.

Osborne said the developers would still have to get a conditional use permit or development agreement for an artificial lake under Nye County Code. He said the planning department has a draft development agreement that will be reviewed by the RPC next month. RPC member Greg Hafen II suggested postponing the zone change and master plan amendment until then.

Lewis added they would have to come back with a tentative subdivision map. RPC member Joe Goode Sr., an architect, said Spring Mountain Raceway would have to submit site development plans to be reviewed by the planning department and the Pahrump Building and Safety Department has to stamp and approve them.

The RPC last November approved caretakers’ cottages for the subdivision, to be called Spring Mountain Estates before the zone change. The subdivision calls for lot sizes ranging from 11,925 square feet to 23,995 square feet on the additional land. The subdivision will be a private, gated housing development for weekend homes, with 24-hour security.

County commissioners encountered some criticism after holding a special conference call in January in which they voted 3-1 to approve a resolution, that had yet to be drafted, offering to acquire a utility system at Spring Mountain Motor Sports. The current facilities are served by two wells and five commercial septic systems. The plan is for a water system and a sewer treatment plant with a capacity of treating 80,000 to 100,000 gallons per day.

Spring Mountain Raceway has to acquire a conditional use permit to build a planned water and sewer system, he said.

“It is definitely the intent of the racetrack to move forward with a development agreement which gives you full right to impose any conditions,” Meads said.

“We’re just under some very heavy deadlines by General Motors to get this facility up and running for the plans they have to the community. We’re trying to cut two and a half weeks out of the process,” he said.

The racetrack was originally a Corvette Driving School, then the Cadillac Training Center was added. Meads said GM now wants to use the track for warm weather testing.