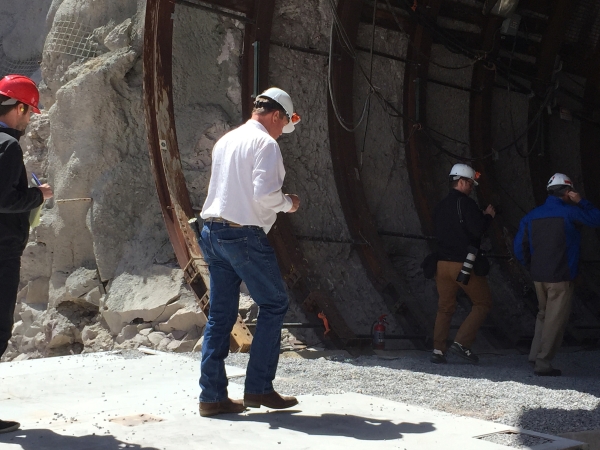 The State of Nevada and Nye County are on opposite sides over the Nuclear Regulatory Commission report that said a proposed nuclear waste repository about 100 miles northwest of Las Vegas would present “only a negligible increase” in health risks from radionuclides that might leak into groundwater.

The comments submitted by both entities in November show divergent views on the environmental impacts of the proposed repository that are stated in the report completed by the agency in August.

The NRC ordered its staff to resume the non-adjudicatory portion of the Yucca Mountain licensing in 2013, although the applicant, the U.S. Department of Energy, had terminated its Yucca Mountain repository program and sought to withdraw the license application.

As part of the restart, NRC staff requested that the DOE prepare an EIS (environmental impact statement) supplement to correct deficiencies in evaluation of groundwater impacts identified in 2008. NRC staff then prepared the Draft EIS Supplement and issued it for public review and comment after the DOE refused the request to prepare the EIS supplement.

“This is a totally unprecedented situation,” Bob Halstead, executive director of Nevada’s Nuclear Projects Office said about resuming the process during the Nevada Commission on Nuclear Projects meeting that took place in Las Vegas on Friday.

The NRC study stated the maximum dose, or an annual dose to the reasonably maximally exposed individual of potential contamination in Amargosa Valley would be maximum 1.3 millirems of normal background radiation of 300 millirems a year for up to one million years, but the analysis concluded by the state of Nevada show that radionuclides could exceed 15 millirem per year in less than 1,000 years.

“If the titanium drip shields fail massively or if they are not installed, our expert analysis of DOE’s documentation in the license application concluded that the 15 millirem per year radiation protection standard could be exceeded in less than one thousand years, and perhaps as early as 750 years,” Halstead said. “The maximum dose during the first 10,000 years after closure could be about 150 millirem per year, exceeding by 10 times the allowable standard, at about 2,000 years after closure.”

Meanwhile, in a response submitted to Cindy Bladey, chief of the Rules, Announcements and Directives Branch at the NRC, Nye County officials urged the NRC and DOE to move forward with completion of the Yucca Mountain licensing process.

“The conclusions reached in the draft EIS appear consistent with the extensive body of scientific research and studies for Yucca Mountain,” the statement reads. “The environmental impacts of the proposed geologic repository at Yucca Mountain are negligibly small, well within all national and international regulatory environmental standards for up to one million years.”

power reactors in North and South Carolina said it “has a significant interest in seeing the government re-establish a viable and functioning used fuel management program.”

In a letter to Bladey, the company endorsed the NRC’s conclusion that all of the potential direct, indirect, and cumulative radiological and non-radiological impacts a million-year period on the aquifer environment, soils, ecology, and public health, as well as the potential for disproportionate impacts on minority or low-income populations, would be “small.”

NRC staff will issue a final environmental impact statement supplement in the first half of 2016.

“Depending on how the NRC responds to the comments they receive, this final EIS (Supplement) is certainly raising new issues in the licensing proceeding, and might result in legal challenges,” Halstead said.