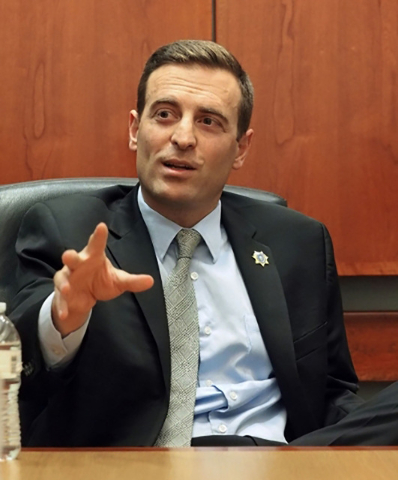 Nevada Attorney General Adam Laxalt will visit Pahrump as part of his “AG for a Day” statewide tour on Sept. 21 at 1:30 p.m., at the Nye County Commission chambers, located at 2100 E. Walt Williams Drive in Pahrump. Special to the Pahrump Valley Times

Nevada Attorney General Adam Laxalt will visit Pahrump as part of his “AG for a Day” statewide tour.

The event will take place Sept. 21 at 1:30 p.m., at the Nye County Commission chambers, located at 2100 East Walt Williams Drive in Pahrump.

“I strongly believe that the closer the government is to the people, the more effectively we can meet their needs,” Laxalt said in a press release. “That is why this ‘AG for a Day’ tour is dedicated to bringing the Office of the Attorney General directly to the people of Nevada.”

Laxalt will give an approximately 30-minute presentation, followed by questions from the audience. Attendees will also be able to discuss various issues with staff from the attorney general’s office.

Laxalt, following a tradition set by his grandfather and then-Gov. Paul Laxalt in the 1960s, will begin his tour across Southern Nevada communities on Sept. 19.

The tour will provide an opportunity for Laxalt and his staff to hear the concerns of residents in each county, according to the press release.

Laxalt launched his “AG for a Day” tour in northern Nevada with an event in Fallon last week.

Members of Laxalt’s staff representing major divisions within his office will accompany him on the visit.

During the tour, members of the department will present topics that affect residents, such as open government, trends in consumer fraud, domestic violence, guardianships and elder abuse, taxation and local government finance, and military legal services, the press release said.

The meeting will be teleconferenced in Beatty and Tonopah.

Other stops on the list include Mesquite, Laughlin, Boulder City, North Las Vegas and Henderson.

Nevada former Gov. Paul Laxalt created his “Capital for a Day” tour in 1968 when he traveled the state with members of his cabinet to identify and address issues of concern.