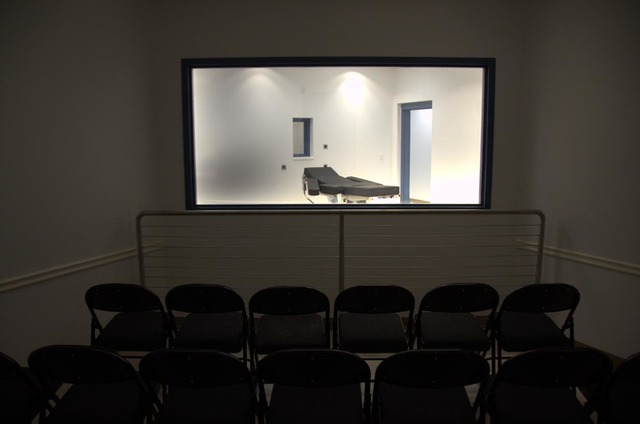 A view of the lethal injection gurney from a viewing room of the newly completed execution chamber at Ely State Prison. Courtesy the Nevada Department of Corrections

CARSON CITY — Nevada’s new execution chamber at Ely State Prison is finished, but there is no expectation it will be used anytime soon.

The state can no longer obtain the drugs it needs to proceed with an execution.

Nearly $860,000 was approved for the new chamber by the 2015 Legislature to replace the death chamber at the now-closed Nevada State Prison in Carson City.

Nevada has the death penalty and is required by law to use lethal injection for executions, but its supply of one of the drugs has expired and drug companies will no longer provide the chemicals to the state for such purposes.

The new execution chamber and related facilities take up 1,900 square feet of the administration wing at the Ely State Prison, the state’s maximum security prison where Nevada’s death row population of 81 men is housed.

There are no pending executions because of legal appeals in progress by the inmates. The execution space at the prison will be used for other purposes in the meantime.

State Senate Judiciary Chairman Tick Segerblom, D-Las Vegas, said he does not plan to propose legislation to do away with the death penalty given the de facto moratorium on the process. While there might be the support to abolish the death penalty in the Legislature, any bill would likely be vetoed by Gov. Brian Sandoval, he said.

Segerblom said he has no interest in pursuing legislation to change the method of execution, either.

Voters may weigh in

But Assemblyman James Ohrenschall, D-Las Vegas, named last week as chairman of the Corrections, Probation and Parole Committee, said he plans to ask voters to weigh in on whether to repeal capital punishment.

“Given the state audit that documented the high financial costs of having capital punishment as a penalty in Nevada, along with the practical matter of the lack of availability of the lethal chemical cocktail used to carry out the executions, I think it’s time that Nevadans are asked to weigh in on whether they still want capital punishment on the books,” he said.

Ohrenschall said he will introduce legislation to amend the state Constitution to abolish capital punishment and make life without parole the maximum sentence. The measure would have to pass the Legislature in both 2017 and 2019 and then go to the voters in 2020.

He will also propose legislation for a moratorium on capital punishment until voters can have the final say on the issue.

The 105-page audit cited by Ohrenschall, presented to lawmakers in 2014, showed that the cost to prosecute and litigate death penalty cases is higher than if convicted murderers were given life in prison.

Death penalty cases cost the public on average $1.03 million to $1.31 million, according to the audit. In a murder case in which capital punishment is not sought, the average cost is $775,000. In those cases, prosecutors typically seek life in prison without parole.

The 2013 Legislature ordered auditors to review the costs of capital punishment. The audit, which took 18 months, looked at the price of trials, appeals and jail time for 28 Nevada cases.

Nevada prison officials said last month that the state will have to explore its options to carry out executions after it received no bids from pharmaceutical companies to supply drugs for lethal injections.

The state issued 247 requests for proposals on Sept. 2 after its stockpile of at least one drug used in executions expired. Not one response was received.

Nevada has used the drugs midazolam and hydromorphone to administer a lethal injection. Both are manufactured by Pfizer.

Nevada’s last execution, by lethal injection, occurred at the Nevada State Prison on April 26, 2006, when Daryl Mack was put to death. Mack was executed for the rape and murder of a Reno woman, Betty Jane May, in 1988.

Nevada has executed 12 inmates since capital punishment was reinstated by the state Legislature in 1977. All but one have been “volunteers,” or inmates who have voluntarily given up their appeals.